Whenever I walk around my beloved city, I admire her with an open heart. To celebrate all the times I commune with Florence, I take a photo. In the last couple of weeks, I delighted in a rainbow and a seagull flying by, a sunset from Ponte Santa Trinita, a view of the downtown from the Giardino delle Rose, a glimpse of the twilight from Lungarno Vespucci, and a visit to the Giardino di Boboli. When I am present with Florence, my body relaxes and my breath slows down. Not only does her beauty become more intense, but her magic as well. Beholding Florence through my senses is how I receive her love and feel a sense of tranquility embrace me.

The moment the glass door of the building on Lungarno Cellini clicked shut behind me, my eyes lifted toward the sky. I remained immobile to admire the rainbows muted colors fading into the clouds. After a scooter zipped by, I rushed across the street and stood against the red brick barrier. My fingers grazed the wet cement as I took in the view. The hum of the river flowing soothed me while the sight of the rainbow reflected on the water filled me with glee.

I pulled out my iPhone without hesitation. Two runners glanced up as they ran behind me, and one young woman stopped a meter and a half from me to photograph it. Unable to contain my joy, I blurted out, Hai visto il riflesso sullArno? I didnt want her to miss the colorful reflection on the glossy surface of the river. After looking at the Arno again, she took a few more photos. Grazie, she leaned toward me before continuing on her way.

Breathing in the sweet scent of the damp grass from the meadow below, I smiled at how the rainbow embraced the Torre della Zecca in the air and on the water.

After admiring the riverscape, I stepped backwards on the sidewalk until a bicyclist rang his bell. After he passed by, I backed up into the street and stood in front of a parked taxi. Holding my iPhone above my head to include the lamppost, I photographed the view I fell in love with. A seagull soaring through the air startled me at first, but delighted me when I saw it in my photo.

On my way home, I took a detour and hiked up the ramps of Piazza Poggi. When I stopped behind the Torre di San Niccolò, the rainbow had disappeared. After an hour of strolling through the Giardino delle Rose, another rainbow appeared in front of me again as I sauntered alongside Piazza Demidoff. As I proceeded toward Ponte alle Grazie, I glanced over my shoulder to revel in the rainbow as it inched along with me.

If seeing one rainbow is fortuitous, then seeing two of them in one day is serendipitous.

Snippets of conversations swirled around me as I stood in my favorite spot on Ponte Santa Trinita to watch the sunset. With my legs inches from the bridges stone wall, I faced west, admiring the view while the sun waned. After a group of teenagers, standing across the bridge from me, headed toward via Tornabuoni, a hush enveloped me. 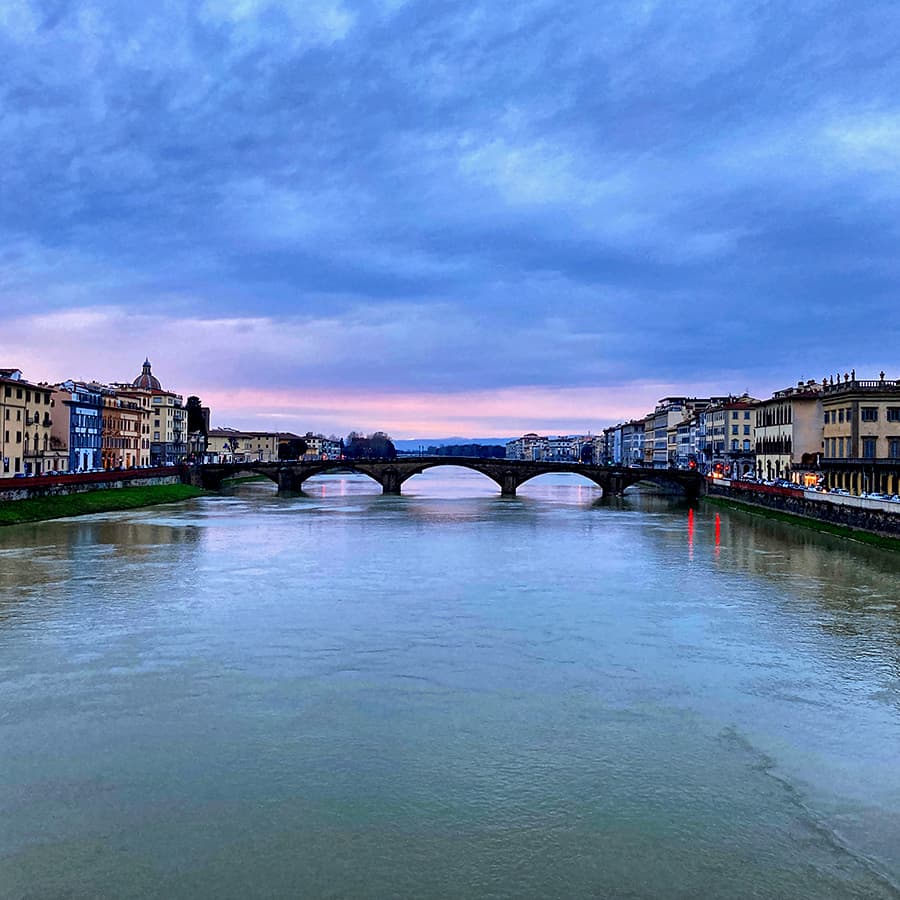 I kept my eyes on the horizon, breathing in the wintry air. The muffled sunlight painted pale streaks of pink and orange in the creases of the clouds. I smiled at the muted reflection of the sky on the water, which faded as quickly as it appeared. My heart expanded as I reveled in the sunsets tranquility.

The ends of my scarf flapped under my chin as a brisk gust of wind hurtled past me. I squinted my eyes and tensed up my shoulders until it died down. I admired a few seagulls flying high in the sky, but then glimpsed a gray heron traversing the Arno. Its graceful landing on the edge of the grassy area was mesmerizing.

After the church bells began chiming at five oclock, the lampposts and streetlights along the lungarno flickered on. The sweet melody wafted through the air as golden lights twinkled on the water.

When the sky and river became the same shade of bluish gray, they appeared to be hugging Florence. I observed the heron as it flew toward the Ponte Vecchio, which looked like a gold bar atop the Arno.

Before heading home, I marveled at via Maggio and then via Tornabuoni, where a blanket of Christmas lights glistened above both streets and ornaments bounced in the air.

As I marched along Lungarno degli Acciaioli, a wave of gratitude came over me. I felt such delight at glimpsing the subdued colors at sunset, since for most of the day the sky was a sheet of gray. I glanced over my shoulder at the Ponte Santa Trinita and thanked it for delighting my senses this evening.

What struck me when I reached the central grassy area in the Giardino delle Rose was its emptiness. Not only was no one sitting on the stone benches or strolling along the gravel paths, but the rosebushes were also bare. Since my last visit just two days ago, the gardeners must have pruned them all, leaving the wiry stems to expose only their thorns. 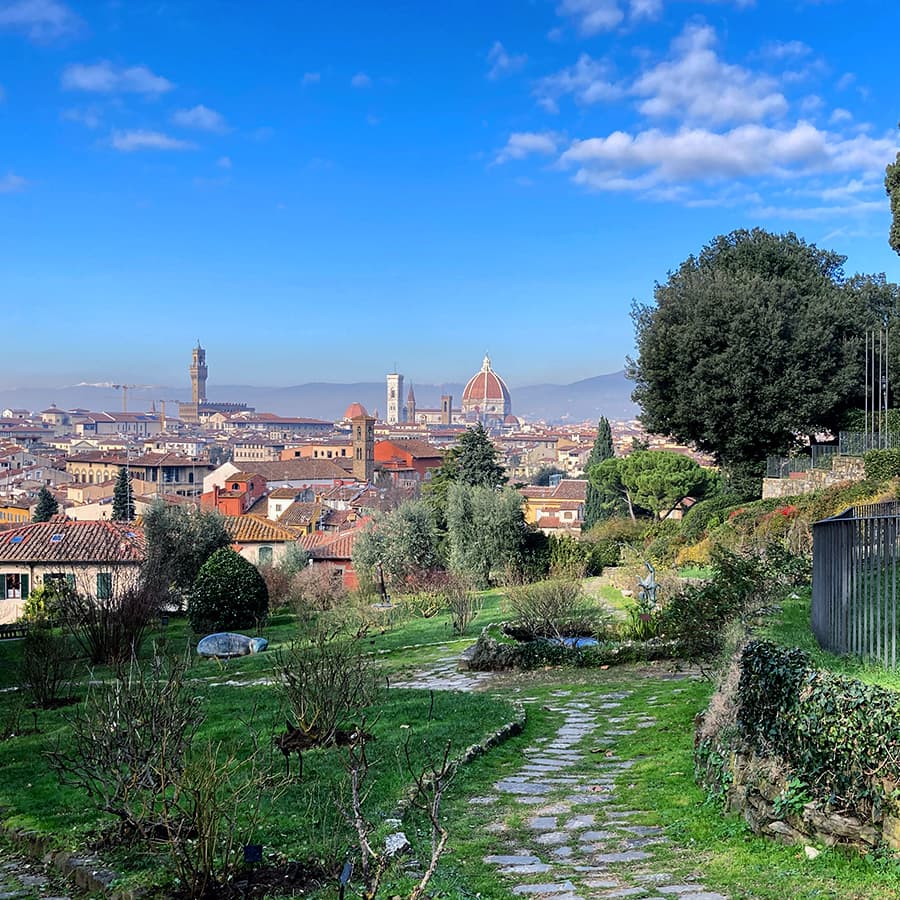 I meandered through the gardens, enjoying the few rosebuds left behind. Skirting the Chinese Lantern tree, whose rust-colored fruits rustled in the wind like shakers, I revelled in a handful of pink roses basking in the bursts of sunlight.

When I arrived at the top of the garden, I balanced my feet on the mismatched stones and leaned against a barrier next to the only rose bush with many white buds. I admired how they pointed up to the sky with such determination. As I surveyed the cityscape, a sprinkle of snow on the mountains behind the Duomo made me smile.

Florence appeared motionless, as if it were asleep. Only a couple of birds were chirping in the trees while water cascaded in the fountain and the crimson hips glistened in the sun like shiny glass beads. The scent of damp soil and dry leaves filled the air and tickled my nose.

A blackbird zigzagged around the rose bushes and hopped into the coarse mulch. He came within one meter of me, the left side of his beak muddy. When I looked straight at him, he flew off, singing. Even though there were few roses, tiny daisies poked out from between long blades of grass, spreading their joy.

As the sun faded in and out behind the thin white clouds, casting shadows onto the garden through the tall cypress trees, I took in slow, deep breaths. Beauty is not just what I perceive with my heart. Beauty is the fullness of this moment. Communing with my environment allows me to dive deeper into that space where love and tranquility expand.

I never find the right moment to leave the Giardino delle Rose. But when the construction workers began hammering and drilling in a building below the gardens, I descended the winding path and reinserted myself back into the city.

After navigating the lungarno whose name changed six times (Diaz, Anna Maria Luisa dei Medici, degli Archibusieri, degli Acciaioli, Corsini, Vespucci), I positioned myself across from San Frediano in Cestello. With my elbows perched on the brick wall, I gazed at the sun as it crept down the sky. The crisp gusts of wind tousled my hair and created ripples on the Arnos surface. 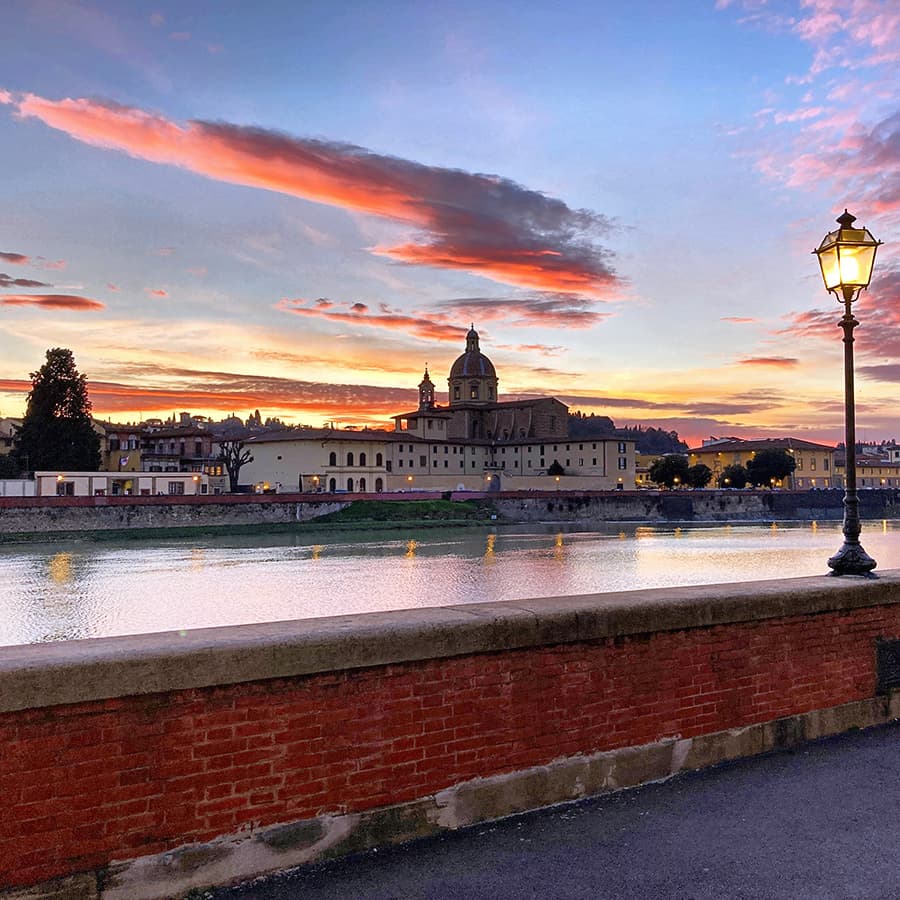 Standing on the pavement, I focused my attention on the sunset. The sliver of the moon glistening in the pale blue sky made me smile. Seagulls soared high above the river while a flock of swallows twisted and turned above the church. I tried not to get distracted by a bus honking its horn at a family trying to rush across the crosswalk or two bicycles ringing their bells as they zipped past each other.

The sun continued to glow even though it hid behind the low hills on the outskirts of town. The streetlights flickered on and cast their golden light on the water, adding a festive flavor to the riverscape. I watched with anticipation as the wispy clouds soaked up the sunlight and radiated vibrant patches of yellow, orange, and pink.

My fingers were numb as I fumbled in my pockets to get my iPhone. After I grabbed hold of it in one hand, I leapt across the empty bicycle lane to stand on the cement walkway where I snapped a few photos.

After hopping back onto the sidewalk, I watched the skies grow dim. Instead of walking home along the Arno, I strolled up via della Vigna Nuova. I was looking forward to the tall buildings on both sides of the narrow street to protect me from the chilly wind.

Before crossing via Tornabuoni, I looked up at the inky sky. A wave of gratitude came over me as I reflected on this sunset. The sun made such significant efforts to decorate the sky with vivid colors, only to have nightfall erase them.

After reading about the Giardino di Boboli reopening on Tuesday, I put on my shoes and dashed out of my apartment. The thrill of visiting the gardens quickened my step. I rushed down the lungarno, zigzagged across the Ponte Vecchio, and headed along via Guicciardini to Palazzo Pitti. Entering through the palaces doors, my pace slowed down. 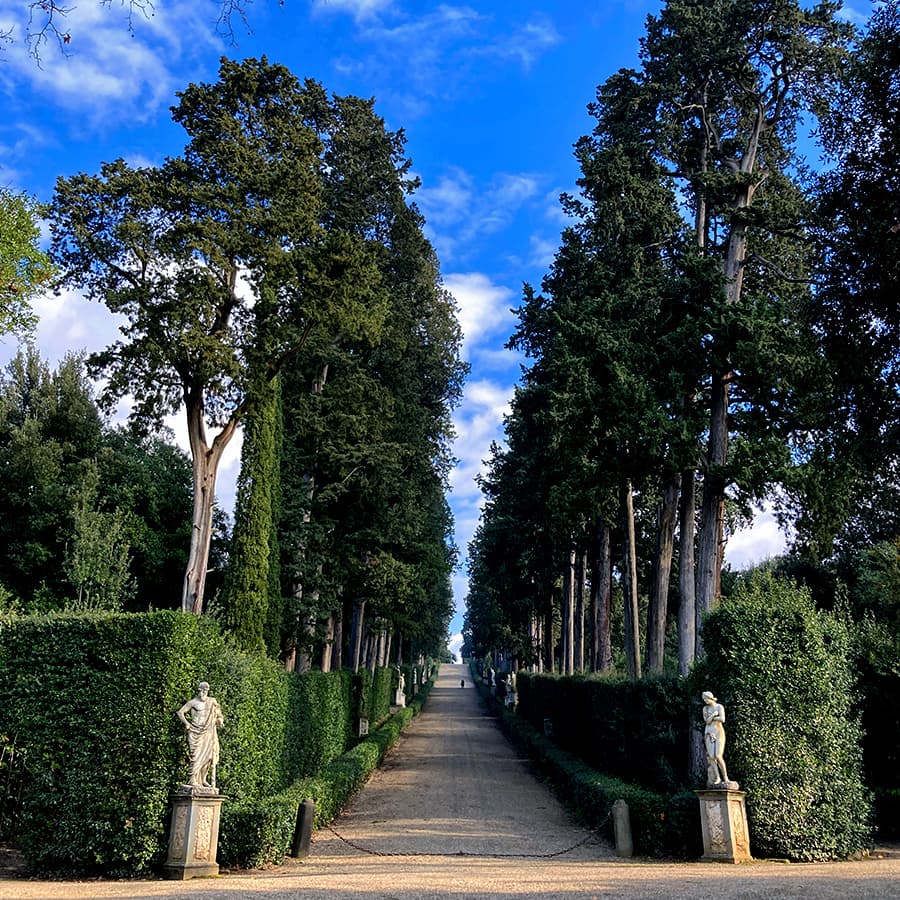 Without a second thought, I strode toward the limonaia. I kicked up the crumbling brown leaves as gravel crunched under my footsteps. The sweet perfume of cypress trees and dewy grass wafted in the air. I knelt down to admire the lavender crocuses and petite daisies with magenta tipped petals sprouting on the lawn. Chalky clouds drifted across the sky, exposing bright blue patches for a few moments before hiding them again.

When I reached the limonaia, I positioned myself in the middle of the alley of London Plane and Linden trees to listen to the wild parrots chirping from the long, exposed boughs. My heart melted when church bells chimed like a soft whisper weaving through the gardens.

I tiptoed around the cracked seeds and broken branches strewn across the soil. Glancing up at the trees on both sides of me, I wondered if their roots intertwined beneath my feet, connecting us all together in some magical way.

Standing toward the bottom of the Viale dei Cipressi, I paused for a moment to embrace the long line of cypresses and statues. As I circled the Isolotto, I peered at the Fountain of the Ocean and smiled at its reflection on the pond. Passing through a few pergolas, I hiked up the circular staircase to the Rose Garden. I tilted my head to one side as I admired San Miniato al Monte glowing above the lush countryside.

I meandered through the gardens and exited Palazzo Pitti. The thrill I felt earlier had settled inside of me as joy and tranquility. Not only was my pace slower strolling down via Guicciardini, but so was my breath. As the city whirled around me, I reminisced about my standing in the alley where the trees embraced me with love.