August was a month full of ups and down. We had our hottest days and our mildest ones of the summer. Retreating from the sultry weather and the throngs of people navigating the city was necessary. I found solace in watching sunsets along the Arno and walking through the gardens, admiring Mother Natures gifts. In these tranquil moments, I basked in Florences gentle embrace.

As the skies darkened, the excitement of the sunset diminished. People headed in different directions: some went in search of food and drinks, while others strolled down the brightly lit streets enjoying the balmy evening.

After relishing in the vibrant colors streaking the sky from Ponte Santa Trinita, I walked down Lungarno degli Acciaiuoli. Lampposts were aglow like orange flames and the Ponte Vecchio a bright gold bar.

The summer breeze carried with it melodies from the guitarist singing to a large crowd on the bridge. A flautist, standing in front of one of the Ferragamo windows, played pop songs that made everyone smile.

The moon illuminated the clouds surrounding it and its chalk white light glistened on the Arno and stretched toward me.

Propping my elbows on the cement-topped brick wall, I scanned the riverscape. A renaiolo packed with tourists glided down the Arno through the moons reflection. The dark waters lapped against the riverbank as I took a photo.

When a refreshing breeze fluttered past me and caressed my face, I closed my eyes. Breathing in the scent of the warm stones under my feet and the cool water in front of me, a wave of joy rippled through me. When I opened my eyes, the renaiolo was approaching Ponte alla Carraia.

As I continued toward the Ponte Vecchio, the moon rose higher in the sky as its reflection extended itself further on the Arno. I thought the sunset was the highlight of my day. But the moons intensity during the blue hour was even more spectacular.

A half hour before noon, the sun was ablaze in the cloudless sky. Heat wafted up from the stone street as I crossed the Ponte Vecchio. Red-faced tourists exposing more skin than normal straggled in the shade on one side of the bridge, leaving the other side empty. On via Guicciardini, I walked mainly on the pavement, hopping back onto the sidewalk only to avoid oncoming traffic. 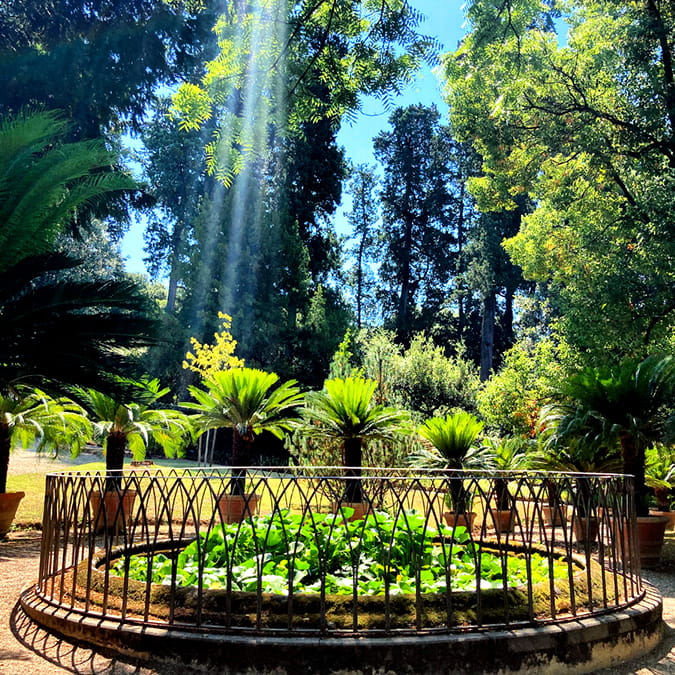 Upon entering the Giardino di Boboli, a wave of tranquility enveloped me. The crunch of the gravel under my feet relaxed my body. I held out my arms and breathed in the gardens sweet scent. Moist soil, tall grass, dense hedgerows, and an array of multicolored flowers.

With every step, my connection to the earth became stronger. Bees feasted on long lavender branches. Lemon-colored butterflies did pirouettes above wilting roses. I lingered under the cypresses to revel in the shade and cooler air.

Light brown leaves tumbled from the towering Linden trees as I headed toward the Upper Botanical Garden. I leaned against the railing around the pond where lotus leaves stood a meter above the water. A small group inspected the flowers with their hands behind their backs as if admiring works of art.

While sitting on a stack of stone slabs, the church bells rang. My heart melted as I looked at the gardens eclectic mix of trees: Japanese maple, palm, bamboo, cacti, pine, and an old cork oak. Everything around me seemed to glow.

Before heading out, I dipped my nose into a delicate orange and pink rose. For the rest of the day, when I closed my eyes and took in a deep breath, I could still smell its sweet peachy scent.

After exiting Palazzo Pitti, the long row of large buildings with no greenery startled me. Two hours in Boboli felt like I had traveled far from the center of town. Refreshed and rejuvenated, I only glanced at the Duomo from above a bustling Ponte Vecchio before heading down Lungarno Torrigiani.

Upon entering the Giardino delle Rose, I circled the rosebushes in search of roses to revel in their color and fragrance. When I arrived in the middle of the garden, I paused to admire the broad view of Florence. A sea of terracotta-tiled rooftops where domes and towers reigned above them all. I sat down on a cool slab of rough stone next to the gardens fountain to observe the water ooze out of the bronze statue and trickle into the pond. 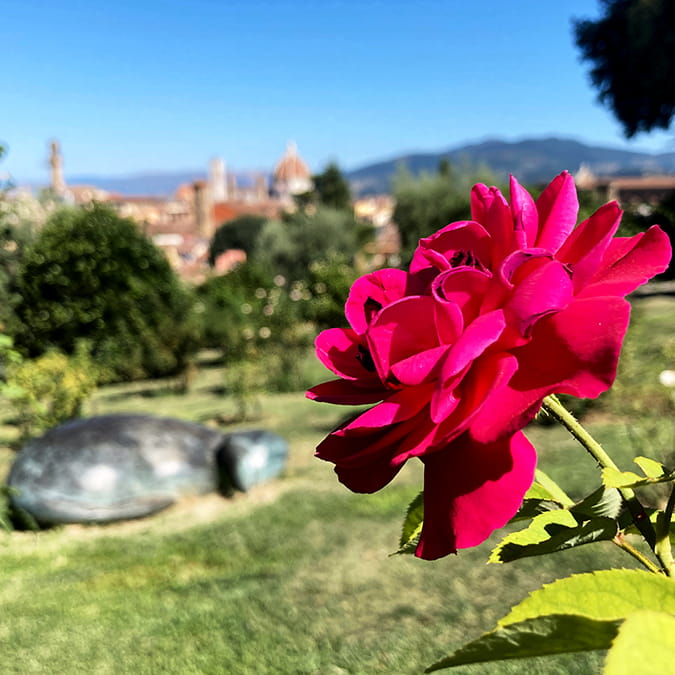 A hush shrouded the gardens: no construction workers hammering or sawing, no cars honking, and no motorini rattling up the winding road. The sound of muffled footsteps and hushed voices floated around, but didnt distract me from my peaceful surroundings. The cypresses appeared immobile as the breeze was too weary to make their branches bounce.

With the sun dominating the cloudless sky, I leaned back and let the shade envelop me. While puffs of balmy air brushed against my skin, I inhaled the mellow scent of parched soil and dry leaves.

Inches from my feet, a tiny gecko scurried across the pathway where bees hopped from blossom to blossom. Fresh green leaves were sprouting, while bunches of red, yellow, and white roses were blossoming.

Instead of leaping up to take in the view while San Miniato al Montes bells rang, I closed my eyes and basked in their eleven chimes. Each one relaxed my body further, infusing it with tranquility.

A couple tiptoed around the fountain before perusing the garden. The woman with a floppy straw hat and dark glasses scoured the area for roses while her companion consulted a crinkled up map as he headed for the exit.

After a few other couples passed by, I hiked up to the gates along Viale Poggi. A pack of cyclists zoomed past a small group hiking up to Piazzale Michelangiolo in a single file line. When I reached the Fontane delle Rampe del Poggi, I stretched open my heart and welcomed more of Florence in.

The Arno was busy. Renaioli (sand digger boats carrying tourists) and canottieri (rowers) row up and down the river, turning around before reaching Ponte alla Carraia. Facing west, I breathed in the balmy breeze while tipping my head back to revel in its gentle rays. Catching a whiff of the rivers crisp, musky scent highlighted the moment. 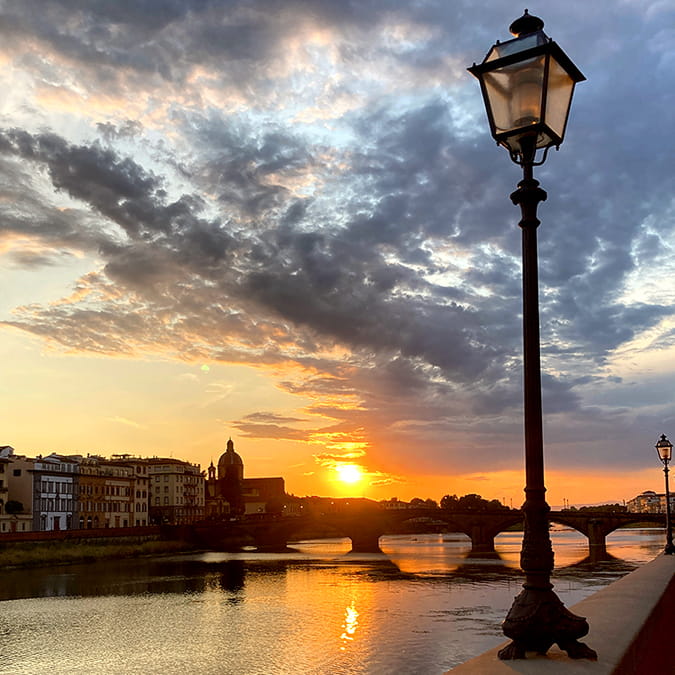 When the sun slipped behind the clouds, the air grew cooler and the light dimmer. When the clouds exposed the sun, golden beams of light burst out of the sky, shimmering on the water. San Frediano in Cestello loomed under the dark clouds while the sky was still aglow.

The intermittent roar of motorini, cars, and buses traversing the bridge hindered my ability to listen to the church bells chiming. Two fishermen stood on the weir with their fishing lines in the Arno. They seemed unbothered by the goings-on above the water.

With my hips against the stone barrier, my shadow extended across the other pavement, just touching the bike lane. Pedestrians dashed by in both directions: either toward the Oltrarno or Piazza Goldoni. A few meters away, a young woman stood next to a lamppost. She scooped gelato into her mouth while gazing at the horizon. Crowds gathered on the north side of Ponte Santa Trinita where the sunlight kissed it. When there was a lull in traffic, only brisk footsteps and cheerful voices permeated the silence.

It was almost eight oclock when I headed home along Lungarno Corsini. Every time I glanced back, the sunlight enhanced everything it touched. The colors in the sky livened up and the gray clouds became more defined.

When I stopped at the brick wall, I posed my elbows on the cement before arriving at Ponte Santa Trinita. The sunset, which seemed quite relaxed earlier, transmitted all of its intensity in the days final minutes.

More people gathered along the Arnos barrier. Many took photos of the lively sunset while others stared at it in awe, appreciating its splendor.

The temperatures are lower, and the sun is weaker as August ends. I walked to the Giardino delle Rose where people enjoyed a warm summer day on beach towels and square quilts, eating lunch and chatting in low voices. The higher I climbed in the garden, the smaller the Duomo appeared. Brightly colored roses gleamed atop the rosebushes. 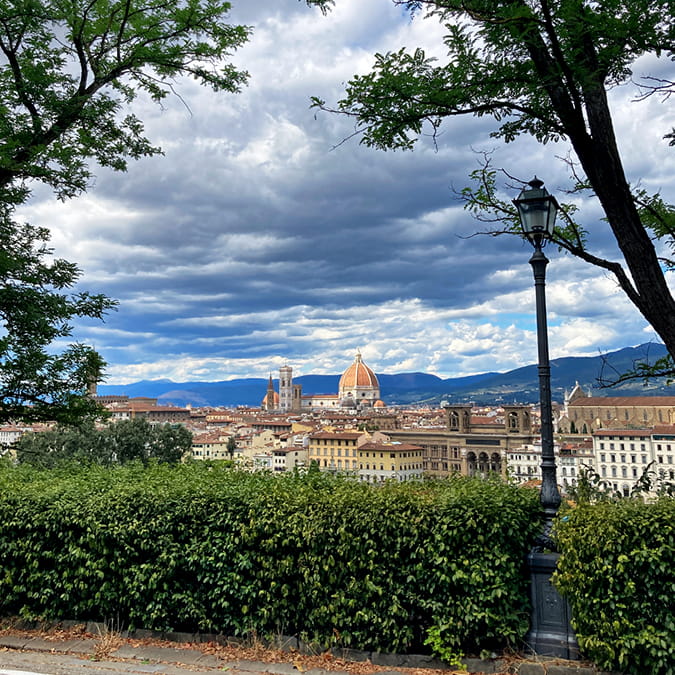 After I sniffed a few of the delicate blossoms and photographed others, I exited onto Viale Poggi. The tree-lined avenue has no sidewalk. Only a gutter sprinkled with dry leaves. As I passed under the tall bamboo, I basked in the cool and damp air they produced. If it were hotter, I wouldve stood below them a few moments.

On my way up to the Fontane delle Rampe del Poggi, I peeked through the linden trees at the Duomo. Leaning against the metal barrier above the fountain, I propped one foot on it and scanned the cityscape. My eyes followed a patchwork of clouds staggering across the turquoise sky. It was a contrast to the pale blue sky we had most of the summer.

As the sunlight warmed up my back, a gentle breeze cooled down my skin. The fountains mist smelled like the sea in the fall. Crisp and clean. I enjoyed listening to the mix of sounds: couples and small groups speaking in different languages, water rushing down the fountain, and musicians playing congas in Piazzale Michelangiolo. After a few moments, the clouds gathered above the Ponte Vecchio as if not wanting to leave Florence.

When I walked back to the Giardino delle Rose, I looked more closely at the linden trees lined up like statues. One every few meters. I paused when I glimpsed the Duomo aglow between two of them. My heart raced as if I were holding a butterfly in my hands. After a van full of tourists to the top of the hill passed by, I continued on my path. But not without admiring the city through every opening.