Spring arrives at its own leisure: trees and bushes sprout new leaves, flowers bloom, people revel in the sun, and visitors flock to the city. Florences energy radiates down every street, along the river, and in her churches and museums. In these anecdotes, I enjoyed glimpsing the Duomo from Via dello Studio, strolling through Giardino Bardini, visiting Palazzo Medici Riccardi, and delighting in a sunset from Ponte alla Carraia.

While zigzagging through the crowds along Via del Corso, I peeked down Via dello Studio. When I glimpsed the Duomo gleaming in the sky, I headed toward it. With every step along the narrow road, more of the cathedral was unveiled. Pieces of sun-faded marble drew my attention up exterior to the cupola. 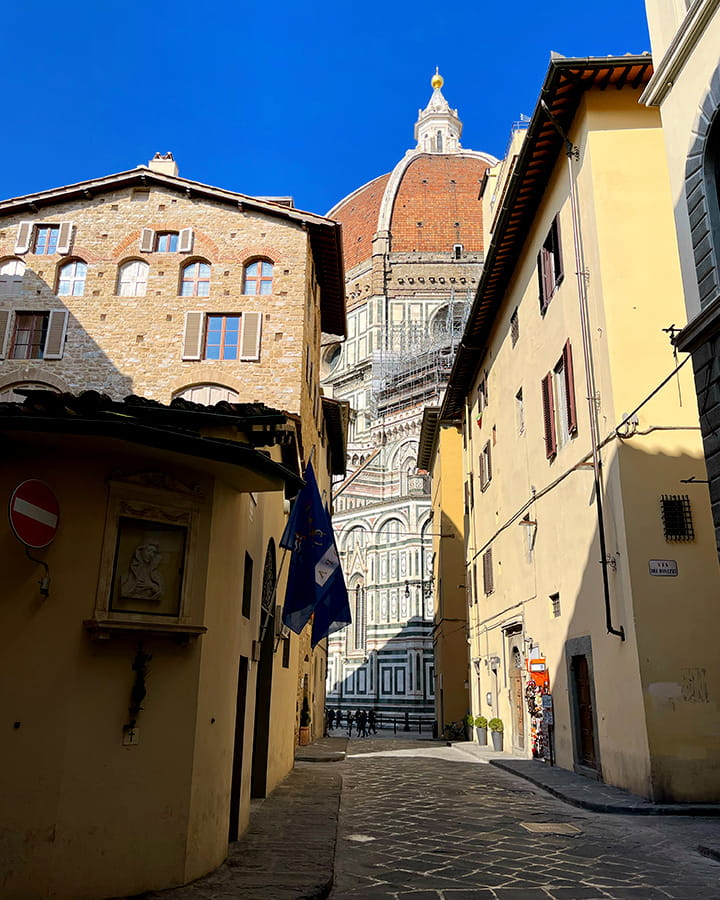 I paused at Via delle Oche across from a tabernacle on the corner. Before a taxi careened past me, I snapped a photo.

As I continued toward the Duomo, I craned my neck to behold more of the façades details. Once in the wide piazza, I gazed at Florences masterpiece alongside me. The city appeared even brighter under the clear blue skies. For weeks, spring has been playing hide and seek with us. One day is cloudy while the next one is sunny.

Cafés and restaurants filled up the sidewalks and a large section of the piazza with tables. Jackets are now unzipped while scarves dangle from peoples necks. The familiar scent of limestone slabs touched by the sun fluttered in the air.

I walked around the Campanile di Giotto, where street artists have set up their makeshift ateliers, and stood on the marble sidewalk. The sun streamed over me and infused me with hope as charmed visitors meandered through the piazza. Four horsesattached to their respective carriagestook a break next to the Battistero to chew on hay from a bag. Pigeons pecked at the stone slabs to grab the pieces they overlooked. Tourists lined up along the steps behind me and gradually entered the cathedral. Tourists sat on the sidewalk, legs stretched in front of them, chatting and absorbing the vibe.

I circled Piazza San Giovanni to enjoy the liveliness before returning to Via del Corso.

Cold bursts of wind whipped past me as I navigated the trails of Giardino Bardini beneath swaths of thin clouds staggering west. Lemon-colored jasmine blossoms basked in the sun, and daffodils danced below the fruit trees. I breathed in springs vibrant energy bubbling underneath the fertile soil. As I walked under the oak tree, its leaves whistled. 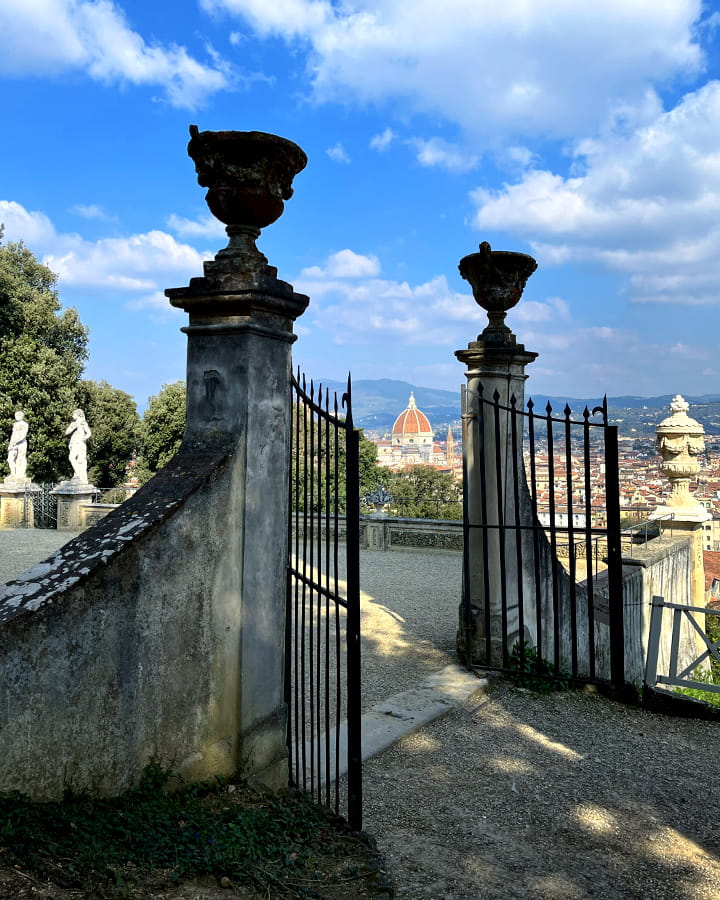 Under the pergola where the wisteria vines were bare, I stepped on broken branches and brittle leaves strewn across the path. A tiny robin with its orange chest popped out of the hedges to rest on a slab of stone. As I approached it, it dove back inside a bush.

The sun warmed my back as I stood on the terrace alone. After a few minutes, I headed to where the vegetable garden used to be near the olive grove. Every time I think of the sunflowers that dominated the area, I sigh.

A few blackbirds chirped as I walked between two rows of olive trees. I scanned the rose bushes between them in search of buds, but only leaves had sprouted from the pruned branches.

When the noon bells chimed, I took cover under an olive tree. I quieted my breath to listen to the city while admiring the Duomo for a few moments.

A pair of pigeons landed on the grass behind me as I headed for the camellia bushes. Their buds exposed slivers of white, pink, and fuchsia. Only a few of them had bloomed.

I navigated the narrow dirt paths lined with laurel bushes. I searched for periwinkle blossoms hiding in the shade. After kneeling to take a photo of one purple flower, a white butterfly caught my eye. It was the first one Id seen this year. I tried to follow it, but it soared over a tall hedge and disappeared.

The sun warmed up the wintry air as I walked down the final set of steps before leaving. Between two patches of lawn, I paused to admire the rooftops and monuments beyond the garden walls.

Between the Battistero and the Duomo, tourists tilted their heads up to take in the cathedrals façade while locals dodged around them. Tables along Via Martelli were set up on the walkway awaiting patrons. Their paper placemats fluttered in the wind. The sun gleamed behind the buildings, drawing lengthy shadows onto the pavement. 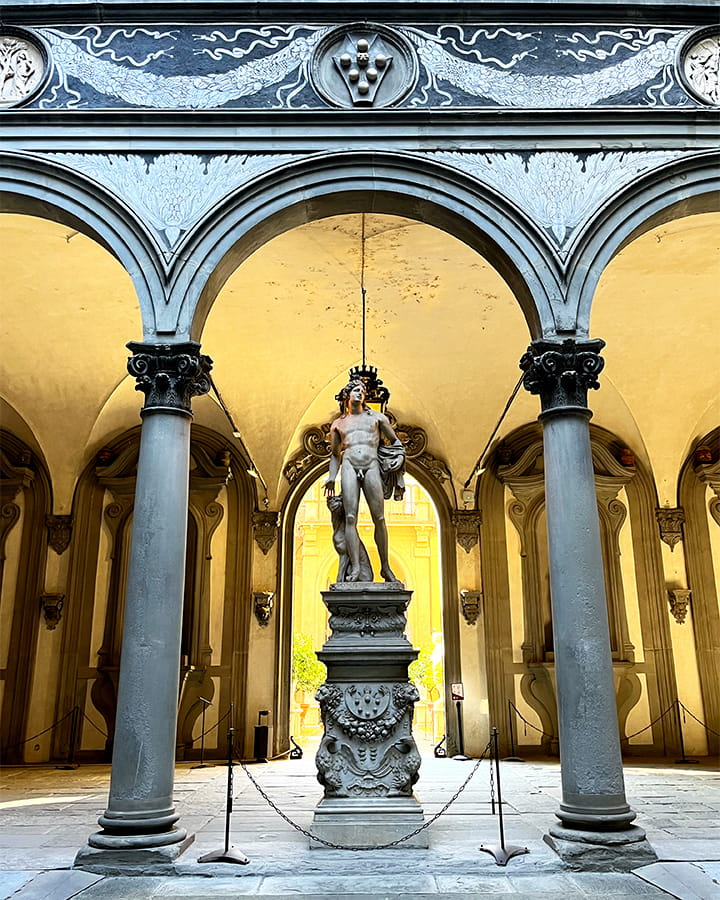 At the corner of Via dei Gori, a long line of taxis made their way toward San Lorenzo. One driver had his elbow hanging out of the window while he drove.

When I passed the first door of the Palazzo Medici Riccardi, I glimpsed Baccio Bandinellis Orpheus in the dim courtyard. By the time I reached the entrance, I decided to visit the museum.

As I climbed up to the piano nobile (noble floor), I felt even more enthusiastic. I could sense Florences powerful yet tranquil energy reverberating within the palazzo.

My heart raced as I tiptoed inside the Cappella dei Magi. Standing in proximity to the frescoes, containing notable Medici family members, gave me goosebumps. My eyes filled up on the vibrant colors.

I sat down in the middle of the baroque gallery to admire the Apotheosis of the Medici by Luca Giordano. To revel in its delightful details, I twisted and turned a few times in my seat.

When I returned to the courtyard, I circled Orpheus once before facing him. A wave of tranquility came over me as the golden light, streaming from the garden, accentuated the marble sculpture surrounded by porticoes.

I strolled through the walled gardens on my way to the exit. Sunlight permeated the entire area with joy. I inhaled the delicate scent of spring emanating from the citrus trees in terracotta pots.

As I stood on Ponte alla Carraia, facing San Frediano in Cestello, the sun-infused wind caressed my face. A mix of the warm scent of the meadow and the cool scent of the water fluttered in the air. The ripples on the river offered a blurred reflection of the riverscape. Canottieri rowed to the edge of the weir, where people sprawled across the sections of dry cement, and then headed back toward the Ponte Vecchio. 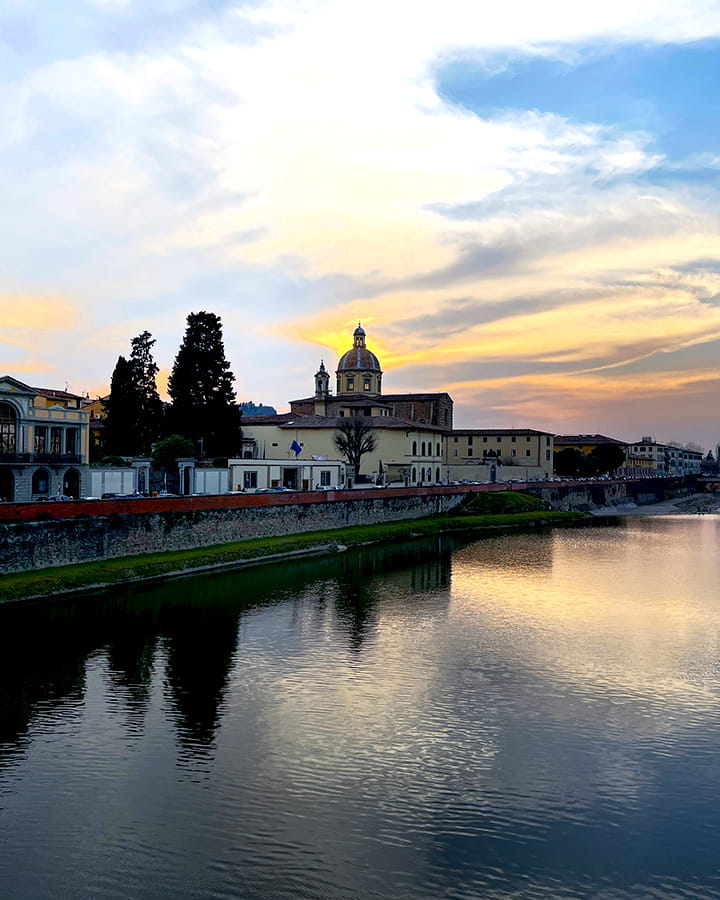 The sun emanated its suffused light through a blanket of white clouds. Behind the basilicas cupola, an opening in the sky allowed the sun to add a bright orange and golden hue.

People were shuffling along the sidewalk while I leaned against the bridges barrier next to a lamppost. As cars and buses were passing by, the bridge trembled.

When the rumble of traffic subsided, I lowered my shoulders and breathed in the sunset. Its vibrant light infused me with both excitement and tranquility. As spring gains momentum, the colors are warming up. The soft pastels that evoked serenity are now being replaced by warmer colors that arouse joyfulness.

After crossing the bridge, I made my way down Lungarno Corsini. After every few meters, I stopped at the brick wall and put my elbows on top to see how the sun was progressing. Other people paused to take a photo of the skies as they darkened.

When I reached the Ponte Vecchio, only a few shards of color still spread across the sky. People sat at outdoor tables on the sidewalk to enjoy the last few moments of the day before the moon reigned and the lights flickered on.