As temperatures soared and more visitors arrived this month, I found solace in Florences embrace. In these anecdotes, I navigated down shaded streets and into wide piazzas, basked in the cool air flowing over the Arno at sunset, and settled under the pergola surrounded by leafy wisteria vines.

My hankering for a vegan wrap prompted me to make my way through the crowds along the river past the Ponte Vecchio. I walked down a shady Borgo San Jacopo and made a few turns to arrive in Piazza Santo Spirito. 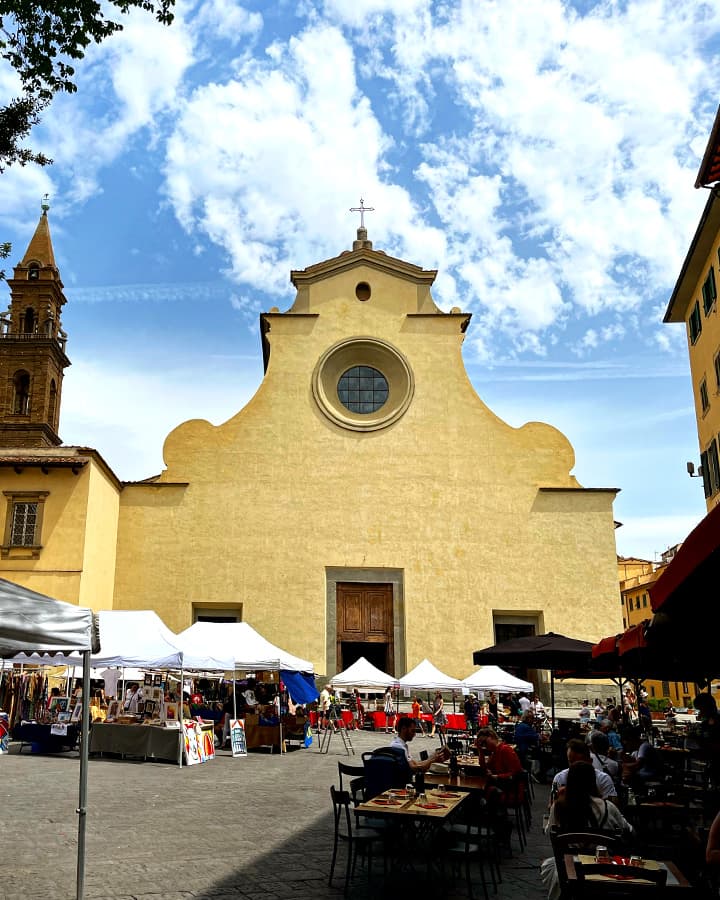 I was surprised to see the piazza filled with colorful stands under white tarpaulins. Even though the mercato is held on Sundays, I often forget its there. Vendors sell fresh fruits and vegetables, household supplies, local honey, artisan jewelry, straw hats, baked goods, and vintage clothes.

As I sipped my smoothie, I walked through the mercato, scanning the stalls. I stopped only twice to peruse the crystals and handmade purses.

People drinking their late morning coffees sat on mismatched chairs around tables on the stone pavement. I enjoyed the relaxing and welcoming vibe, a stark contrast to what I felt around the Uffizi.

As the air was absorbing the sunlight, I slowed down. The wind smelled of dry stones mixed with the sweet perfume of the linden tree blossoms.

While I was standing at the edge of the piazza, the campanile rang its bells. Without looking at my watch, I knew it was noon. I admired the basilicas façade until the chiming was only a whisper.

When I peeked out my apartment windows, the sky had a golden hue to it. I wasnt in the mood to return outside, but I laced up my sneakers and rushed downstairs, anyway. 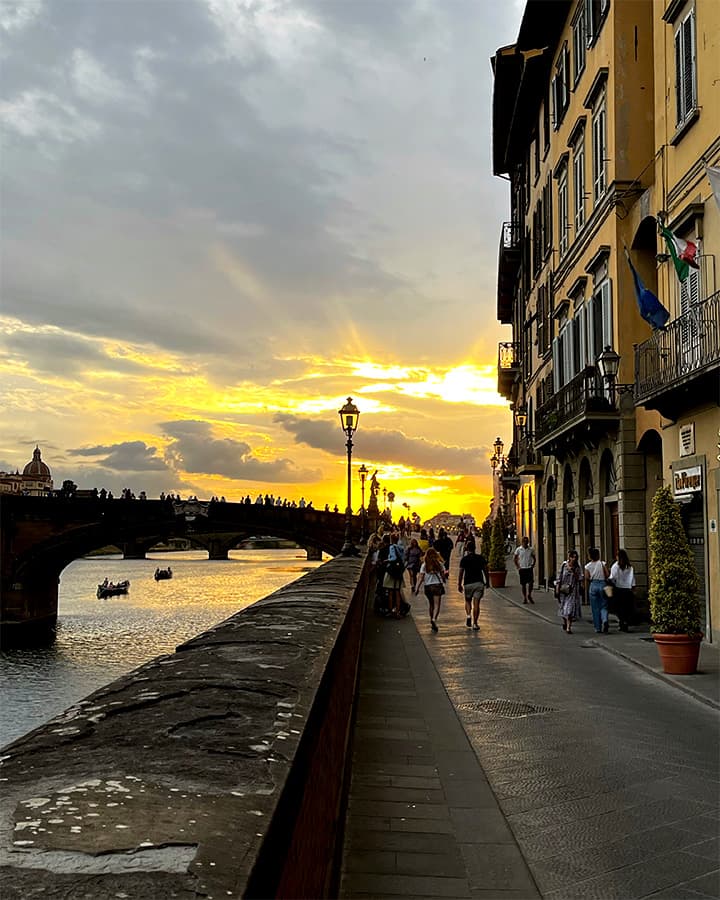 A strong breeze swept my hair back as turned the corner onto Lungarno Diaz. The sunlight radiated under the Uffizis archway. My interest in checking out the evening skies along the Arno added pep to my step.

I zigzagged around couples holding hands and small groups chatting as they ambled down the stone road. A few bicycles passed in both directions, eager to get to their destination.

Once I reached the Ponte Vecchio, I kept my eyes on the sun illuminating the riverscape.

The light streaming down Lungarno degli Acciaiuoli captivated all my attention. I snapped a few photos while walking toward Ponte Santa Trinita. Shards of sunlight stretching from behind the pale clouds set the lampposts aglow.

When I reached the bridge, I paused next to Primavera and filled up on the spectacle and breathed in the light evening air.

A steady wind, smelling of salty seawater, caressed my face while I stood in the middle of Ponte Santa Trinita. The sultry afternoon air cooled down thanks to the scattered clouds overhead. When the gray skies adopted an orange hue, passersby stopped along the bridges stone barrier. Some reveled in the vibrant glow, while others snapped photos. 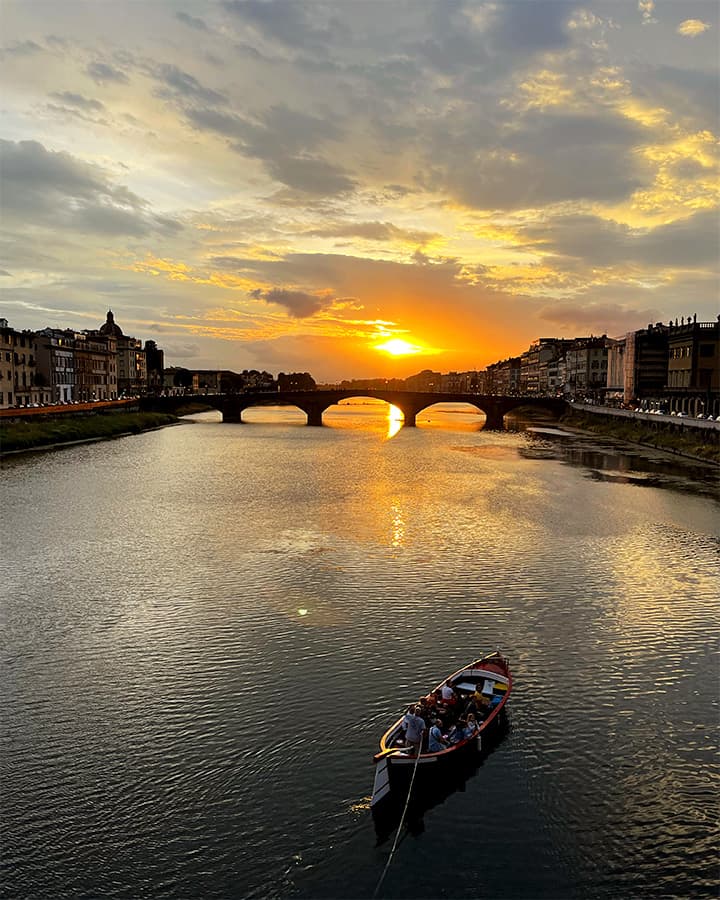 My eyes opened wide when the sun burst through a gap in the clouds, shooting rays of light in all directions. A few moments later, a renaiolo slid out from under the bridge. As the boat made its way toward Ponte alla Carraia, its passengers swiveled in their seats to admire the view.

Scanning the riverscape, I savored the tranquility of the shimmering wavelets reflecting the shadowy sky.

Once the sun ducked behind the low hills, the wind kicked up and the temperatures dropped. The crowds dispersed, fewer cars and motorini traversed the bridge, and seagulls flew solo to the west. I wanted to stay until the streetlights illuminated the river, but it became too chilly.

Before heading down Lungarno degli Acciaiuoli, I paused next to Primavera. The sunsets warm glow had grown pale as the skies were turning blue.

The cool breeze, smelling of grass and roses, embraced me as I strolled around Giardino Bardini. Tiny butterflies, the color of lilacs and lemons, flopped in the air above the rose bushes. While some people headed for the olive grove to lounge under a shady chestnut tree, I stood beneath the pergola. The wisteria vines stretched out toward the city while the gleaming pink and white hydrangeas swayed atop tall branches. Clusters of purple blossoms were hidden behind the leaves. 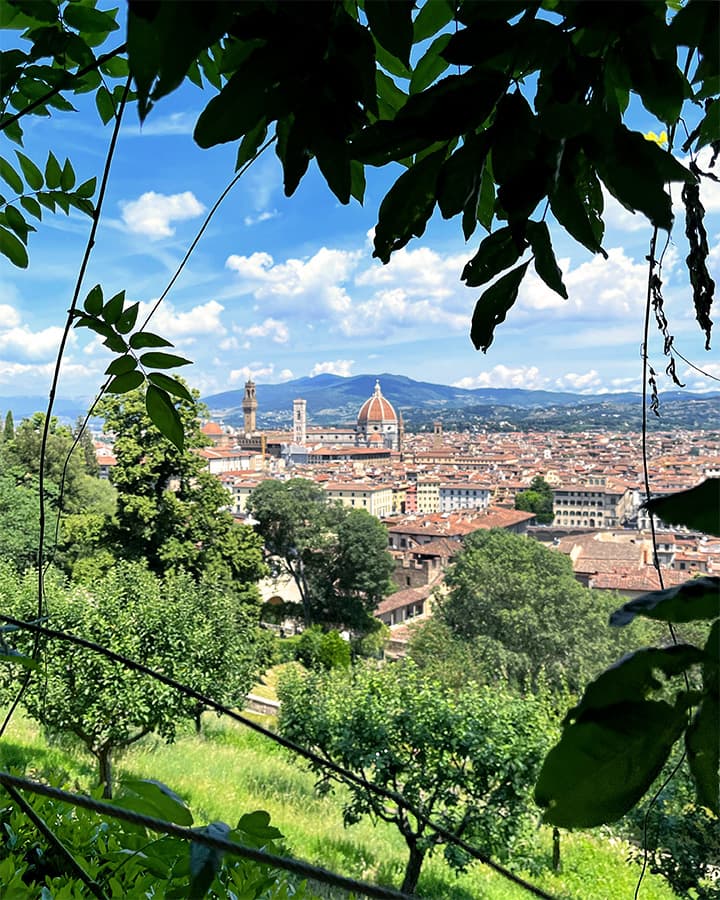 The fluffy clouds added texture to the sky as they inched across the horizon. My eyes were drawn to the Duomo. Framed by the wisteria and fruit orchard, it radiated in front of the dark green mountains. The hum of cars and buses drifting over Lungarno delle Grazie faded in and out of earshot while blackbirds and crows cawed, infusing the garden with life.

Before I continued up the incline, a robin popped out of the hedges and stood on a stone slab at my feet. We both tilted our heads and glanced at each other. On my way out, I paused alongside a towering oak tree to listen to it rustle its leaves as if it were whispering parole damore (words of love).