During the past few weeks, small groups and families dined on restaurant terraces, people ambled through many of the piazzas and streets in the historical center, tourists visited museums and churches, and scenic spots attracted people to watch the sunset. August is a quiet month in Florence when many businesses close for a few weeks. Its the time of year when people prefer beaches and mountains over cities. But this year many Europeans flocked to Florence, hoping to visit it with fewer crowds.

While the temperatures soared in the afternoons, I found great solace walking through gardens, strolling along the tree-lined avenue below Piazzale Michelangiolo, and admiring the sunset from bridges along the Arno. The sultry afternoons invited me to stay home while the early mornings and evenings lured me outside.

In these posts, I wrote about exploring Florences beauty through my senses. Some moments stretched out before me, becoming delightful memories that I captured in both photos and words.

The wind howled in my ears as I walked along Lungarno Serristori. I passed other pedestrians enjoying the shade from the tall buildings next to the wide sidewalk. Across the street, a few bicycles sped by in the red bike lane. As I rounded the corner of Piazza Poggi, the sound of water cascading in a fountain behind the Porta San Niccolò startled me.

I hiked up the cement footpath and stood in front of the renovated Fontane delle Rampe del Poggi, where water trickled into the pristine basin. A bright yellow lotus flower beamed at the sun while I did my best to evade it. I held onto my hair with one hand to prevent it from blowing into my eyes as I navigated the stone staircase bordering the fountain.

Afterwards, I took my time going up the shaded path under the Piazzale Michelangiolo. I caught a whiff of the leafy bushes and trees swirling as a couple scurried past me, each one speaking into their cellphones.

When I arrived to the top of Piazzale Michelangiolo, t-shirts, wooden Pinocchios, aprons, and colorful scarves hanging on all sides of the rectangular stalls were undulating like flags. Most of the vendors tucked themselves underneath parasols, while one street artist made use of Davids shadow.

I backed away from the bannister where I took this photo after feeling the heat wafting toward me. At first, I looked at the Duomo. Then, my eyes jumped to the Ponte Vecchio and the shimmering Arno. A seagull soared high in the sky, pulling my attention back to the Duomo.

I couldnt hear the voices of the couples nearby as the wind continued to sweep by in bursts. I find it refreshing to take in the view of Florence from Piazzale Michelangiolo. There is something therapeutic about rising above the center to appreciate it from afar. The expansive sky, the mountains and hills circumscribing the city, and the buildings of all shapes and sizes give me a sense of tranquility. The intensity of the city disappears and all I see is Florences splendor exhibited before me like a painting.

When the sky grew dark early last night, I peeked out my windows. The moment I spotted a few clouds, I rushed outside. Making my way down Lungarno Diaz, I admired how the sun cast long orange shadows of the handful of passersby onto the road. 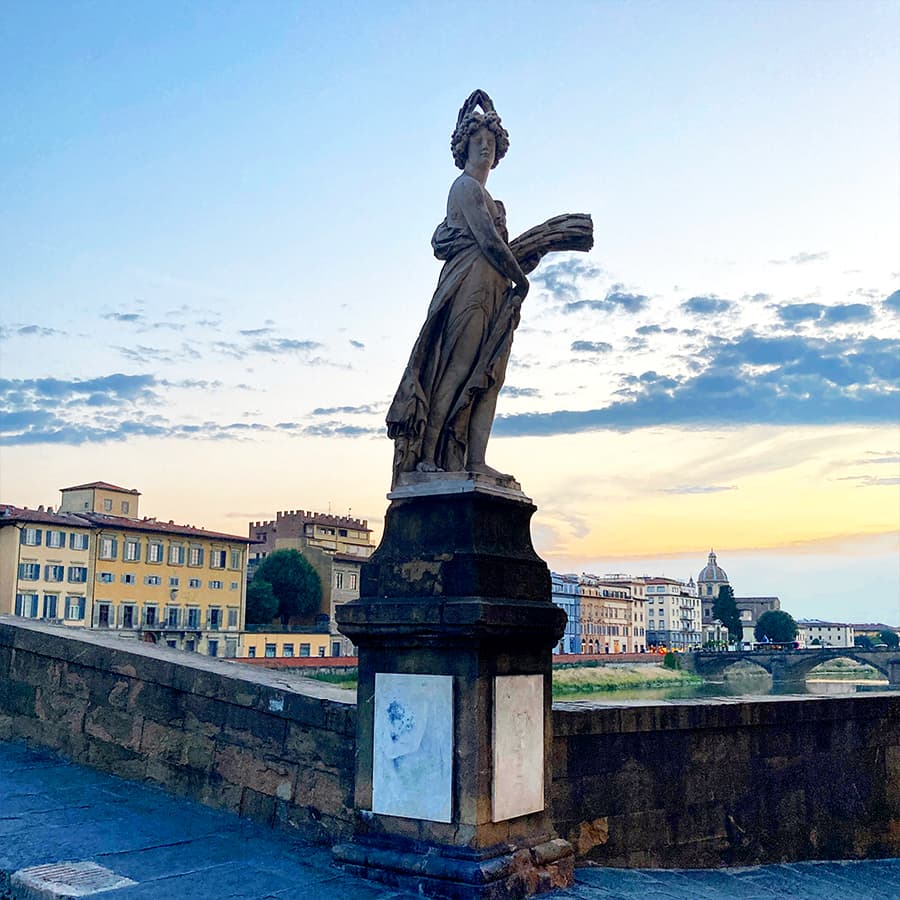 My heart bounced when I reached Lungarno degli Acciaiuoli. After months of it being closed off for work, it reopened to pedestrians. Large terracotta pots containing a tall cone-shaped bush encircled with bright magenta hibiscus flowers stood at the edge of the sidewalk. Big white flags with a red giglio on them waved above the street, giving me a celebratory feeling.

As I approached the center of Ponte Santa Trinita, I glanced over at the Ponte Vecchio. Four people sitting on the railing ate sandwiches wrapped in paper and drank Coca-Cola out of glass bottles. When I arrived in my spot, I first noticed the lampposts glowing on both sides of the Arno. The haze dimmed the sunlight, turning the sky a pale blue.

Leaning my legs against the heat-soaked stone slabs of the bridges wall, I examined my surroundings as if I could capture them in my heart. I pulled my shoulders back to breathe in the steady flow of cool air, empty of any distinct smells. Keeping my eyes on the orange ball as it slid down the sky, I listened to the surrounding sounds.

The bridge was so quiet that I could make out individual voices as the people passed by, the jangling of bicycles as they pedaled by, the faint footsteps on the stone walkway, and the few cars as they rumbled across the bridge. I only looked at the one young man pulling a suitcase as it rattled on the sidewalk.

When the sun tucked itself under a thick band of clouds, the people on both sides of me took off. I followed only a few minutes later. Before turning onto Lungarno degli Acciaiuoli, I peered up at the Estate monument. With no one cars or bicycles passing by, I stood in the middle of the intersection and took her photo. As the street widened next to the Ponte Vecchio, I paused for a moment to face west and smiled.

When the solemn bells of the Torre dArnolfo rang eight times, I headed outside to take a stroll outside. For most of the day, I peeked out at the view from my windows through the half-closed blinds. Only one window where the sun didnt heat the street below was open to let in some airalbeit not that cool. 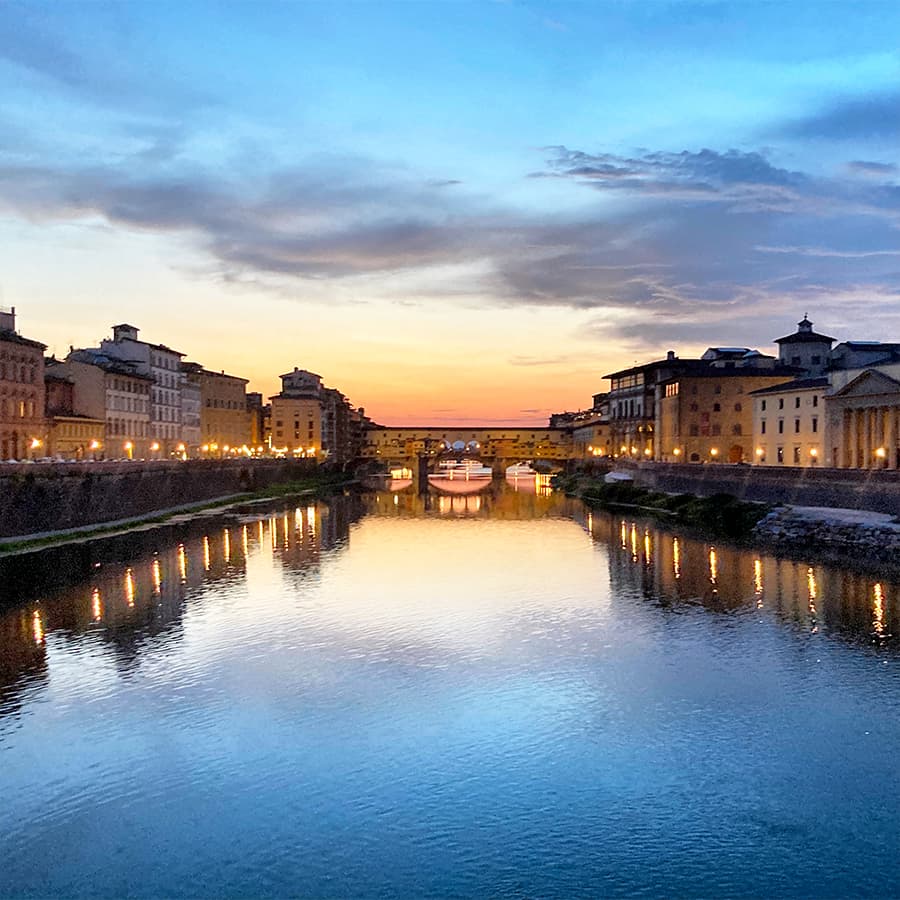 When I reached the corner of Ponte alle Grazie, I hurried to the center of the bridge to admire the sunset occurring behind the Ponte Vecchio. The pink and orange sky glowed as the clouds with golden edges reflected the colors back down to the Arno. Small clusters of tourists stood on the bridge, smiling as they faced west.

Three guys and a girl standing on the weir below me cast their fishing lines into the river. I peeked at them a few times, but kept my eyes on the sunset. I released my shoulders as the light gusts of wind streamed past me, listening to the constant hum of the water flowing over the weir.

A woman startled me when she rushed up next to me. She fixated her eyes on the viewfinder of her camera before capturing a few photos of the sunset. A few others did the same: one young couple took a selfie, and a man walking his dog snapped a photo of a family huddled together. 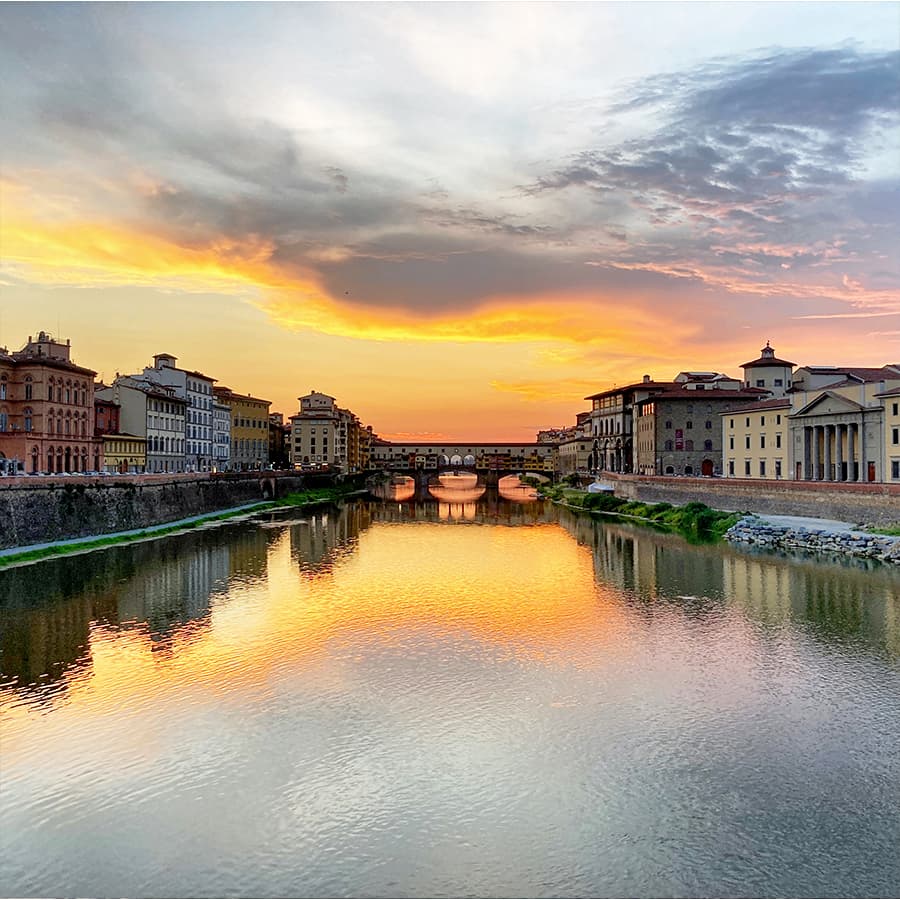 With my elbows on the railing, I leaned forward. As the clouds progressed north, the sky turned blue, leaving a hint of orange and pink glowing above the Ponte Vecchio. I remained in place until the 9pm bells rang. The sound of the water in the background covered up the voices of the passersby.

Watching a sunset, I feel as if time becomes more tangible. When I breathe in a moment, it stretches out before me. Time is like the water flowing in the river: you can only capture a few drops in your hand, but that is enough to experience the water and appreciate it.

Weary couples and small groups of friends staggered through the narrow streets of San Niccolò toward Porta San Miniato. I zigzagged between them, making my way to the Giardino delle Rose. When I saw gardens entrance in the stone wall, I rushed inside and dashed up the steps. I couldnt wait to surround myself in nature. 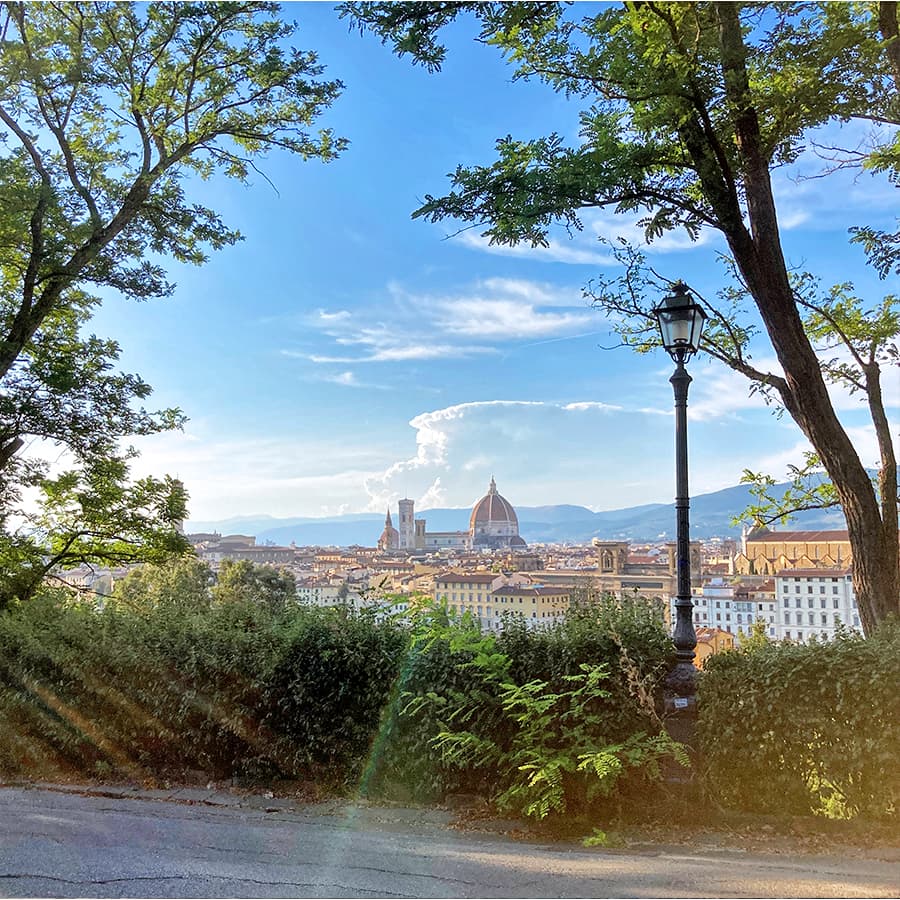 As I walked up the cobblestone pathway, I heard people talking and children giggling. All the shady parts of the grassy areas were full while the sunnier sections were empty.

One gecko leapt under a rosebush as I made my way around the garden. The scent of dry grass whizzed by me as I dipped my nose into a few roses whose petals had sunburnt edges. When my blouse got caught between the thorny branches, I inhaled the sweet scent of the pink rose a second time.

After not finding a shady spot to sit, I exited the Giardino delle Rose. I strolled along the winding road below the Piazzale Michelangiolo. A few people stood against the railing taking photos. My pace picked up when I thought about walking over to the Fontane delle Rampe del Poggi.

The sound of the cascading water filled me with joy. Standing next to the top of the fountain, I scanned the panorama of Florence framed by the pale blue skys wispy clouds. I turned my head to one side to better hear the church bells ringing. People walked up and down both sides of the fountain. One young couple sat on the rocks around the fountains basin and dangled their feet in the water.

I wandered down viale Poggi to return to the Giardino delle Rose, and couldnt resist taking a few photos of the Duomo nestled between the trees. Heading down the scalinata, I crossed paths with people who were trekking up to Piazzale Michelangiolo. One young man marched past me, carrying two pizza boxes. The scent of warm tomatoes and sautéed garlic trailed behind him.

As I walked across Ponte alle Grazie, I looked over at the Ponte Vecchio. The sky was glowing a warm yellow. I closed my eyes and breathed in the balmy air. Glancing toward San Niccolò, I smiled at the crowds seated on the steps of Piazzale Michelangiolo awaiting the sunset.

Standing in the middle of Ponte Santa Trinita, I breathed in the steady breeze brushing past me. If I closed my eyes, I would have thought I was on a boat. The balmy air brought with it the refreshing scent of the Arno. Every time I watch the sunset, its like participating in a magic trick. When I first arrived on the bridge, the sun was a large gold ball glowing behind a veil of clouds. Within only a few minutes, it looked more like a tangerine. 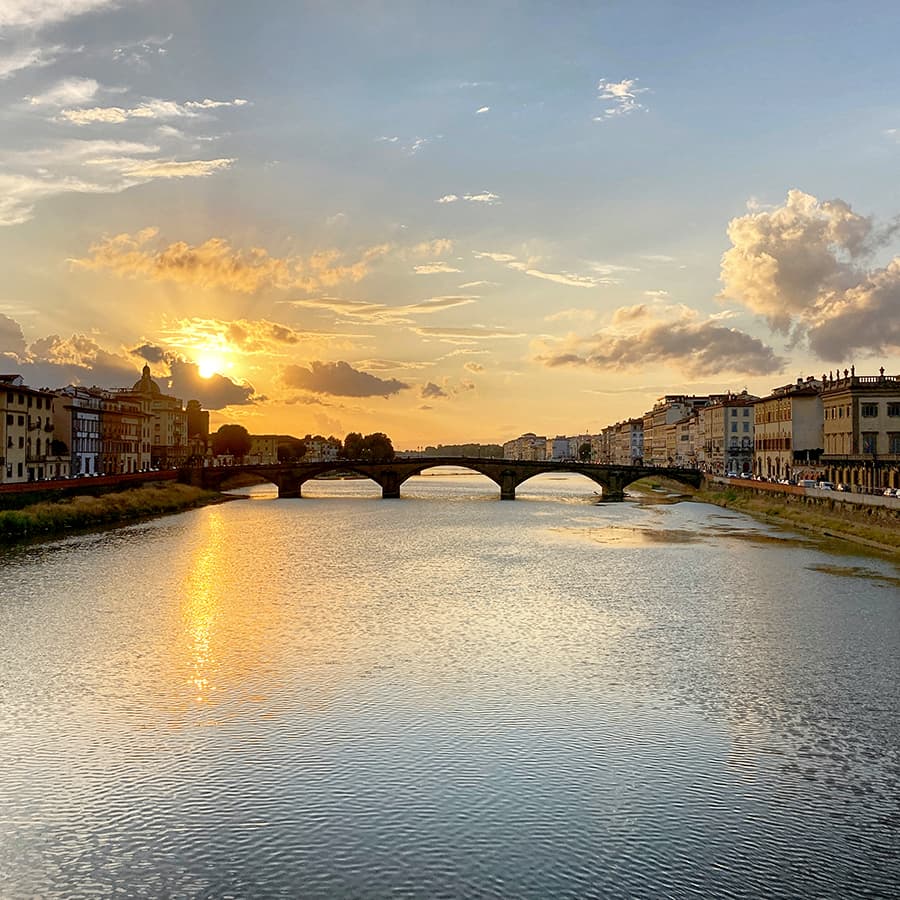 I stared into the horizon, admiring how the colors progressed minute by minute. I diverted my eyes only a few times when fish popped out of the water, leaving ripples in their wake.

A variety of sounds swirled around me, but I remained focused. It wasnt until I heard a 90s tune blaring from a young mans cellphone, sitting only a few meters away from me, that I looked away. By this time, the colors were even more vibrant as the sun cast its golden trail on the Arno. One woman propped her bicycle against the sidewalk behind me to snap a few photos before hopping back on to continue across the bridge. I didnt turn my head to look at her, but I caught a whiff of her freshly sprayed floral perfume.

The wind dissolved the white clouds like a magician pulling a tablecloth off the table. Only a few birds passed overhead as I admired the pale blue sky. They were so high that I could only make out their color (black), but not what kind they were.

I kept my eyes glued on the sun as it crept down the sky, becoming a reddish orange dot above the blanket of haze right before it disappeared. The sky continued to glow as the sun extended its rays as if bidding us all farewell.

Its always difficult to decide when to return home after watching the sunset. I never want to miss out on what Mother Nature has up her sleeve. On this evening, I didnt wait until the blue hour, but I knew it too would be magical.