Living in Florence has taught me to experience beauty more reverently. Instead of perceiving beauty with my eyes, I take the time to absorb it through my senses. I commune with my beloved city by cherishing the details of her splendor, basking in her energy, and lavishing her with my love and appreciation. In these anecdotes, I gazed at the moon glowing above the Duomo, embraced autumn from Ponte San Niccolò, basked in the blue hour above the Ponte Vecchio, revered in the panorama from the scalinata alongside the Giardino delle Rose, and savored the sunset while standing on Ponte Santa Trinita.

My steps were quick as I marched down via Calzaiuoli. When I approached Orsanmichele, I turned the corner to gaze at the statues in their niches. A replica of the Madonna della Rosa, the protector of Florence, brought a smile to my face. Passing alongside Piazza Repubblica, I slowed down to observe the lights at the end of via Strozzi. A few people strolled through the piazza where police officers stood outside their vans and bicyclists delivering food zipped around us.

I kept my head down as I rushed down via Roma to get to a bookstore on via Cerratani. The lights from the luxury shops were on and lit my path. The moment I stepped into Piazza San Giovanni, I looked up at the Duomos façade. The Campanile di Giotto on one side and the Battistero on the other.

As I approached via Cerratani, I noticed a few people taking photos of the Duomo. When I looked up, I saw the almost full moon glowing in the inky black sky surrounded by a veil of clouds above the cathedral. The frigid breeze numbed my fingers as I held my iPhone, waiting for the right moment to photograph the moon. With the murmur of voices and footsteps growing distant, I framed the Duomo in my phones screen. My heart was racing as I snapped a few photos that appeared immediately on my phone.

Afterwards, I stepped to one side, allowing a few others to take their photos. I slowly breathed in the chilly air as I soaked up the majestic sight of the moon adorning the Duomo. Right before I walked away, the Campanile di Giottos bells rang six times, reverberating off the buildings and echoing throughout the piazza. Even after they stopped, a tranquil hum lingered.

Seeing the moon anywhere in Florence is always a treat, but to behold it shining above the Duomo while the bells are ringing is magical.

Before November ended, I left my place early for an appointment so I could stroll along the Arno. Dry leaves tumbled toward me with every step I took on Lungarno Cellini. A few crunched under my boots as I marched against the oncoming wind. I smiled at the grass poking through the edges of the stones below my feet. 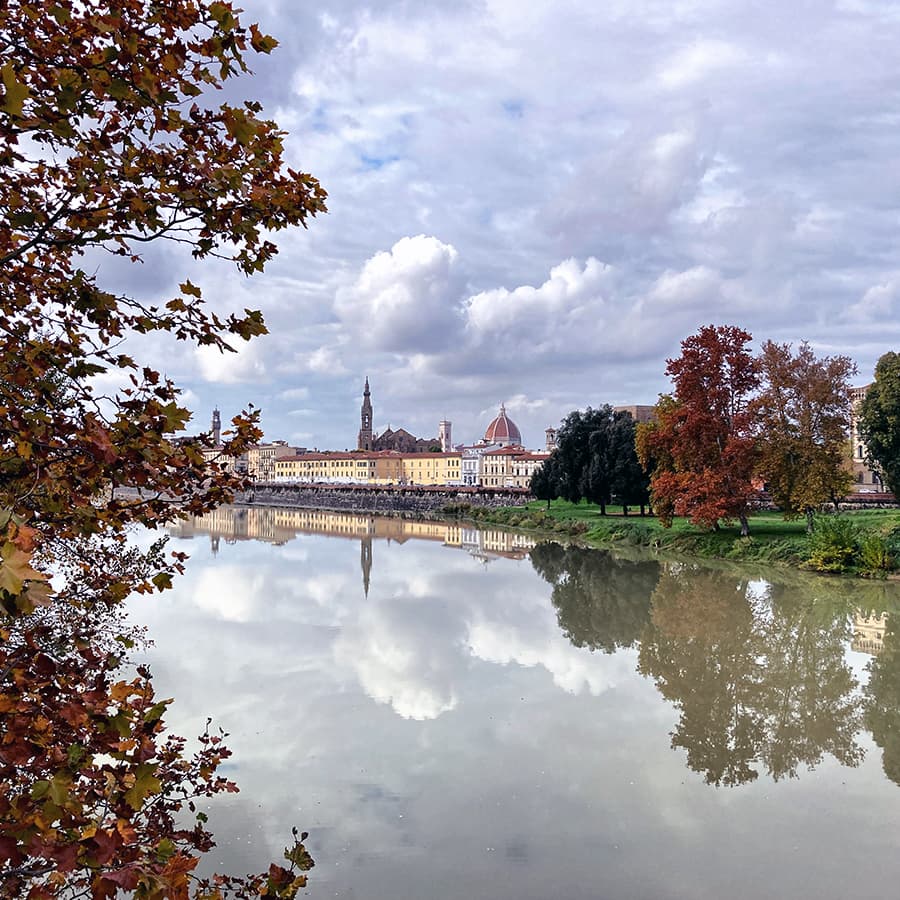 Since I arrived early, I walked past my destination to make it to Ponte San Niccolò. Cars whizzed across the wide bridge and halted at the red light. Their motors hummed as a couple of motorini zigzagged around them to position themselves in front.

Once I peered at the bright colors framing the Duomo, I didnt look back again. I leaned over the metal railing of the bridge as a rust-colored leaf twirled from a branch and landed on the water. At first, I didnt take a picture and instead basked in the view through my senses for a few minutes.

Inhaling the crisp air that made the London Planes branches dance and its leaves whistle filled me with serenity. The scent of soggy leaves and river water tickled my nose.

My heart fluttered as I scanned the entire view. The bright green grass across the river, the rust-colored leaves still clinging to the trees, and the pristine reflection of the buildings on the water. Everything else around me seemed to fade: I no longer noticed the traffic or the pedestrians passing behind me. As I stared at the cupola, the campanile di Santa Croce, and the Torre di Arnolfo, I felt a wave of appreciation come over me.

Beauty has a way of filling up my senses. It enters through my heart and permeates throughout my body. If I were to describe autumn in Florence, this photo would sum it up: the mixture of clouds in the pale blue sky, the autumnal colors in nature, the cool glow of the sun, and the tranquil Arno.

The roar of the Arno echoed throughout my apartment this morning. When I opened my shutters, two pigeons crouched together on a ledge of a neighboring building caught my eye. The sky was a blanket of gray while the water was a murky beige. As I watched it swirl around and head toward the Ponte Vecchio, I thought about how I stood on Ponte alle Grazie yesterday afternoon just after sunset. 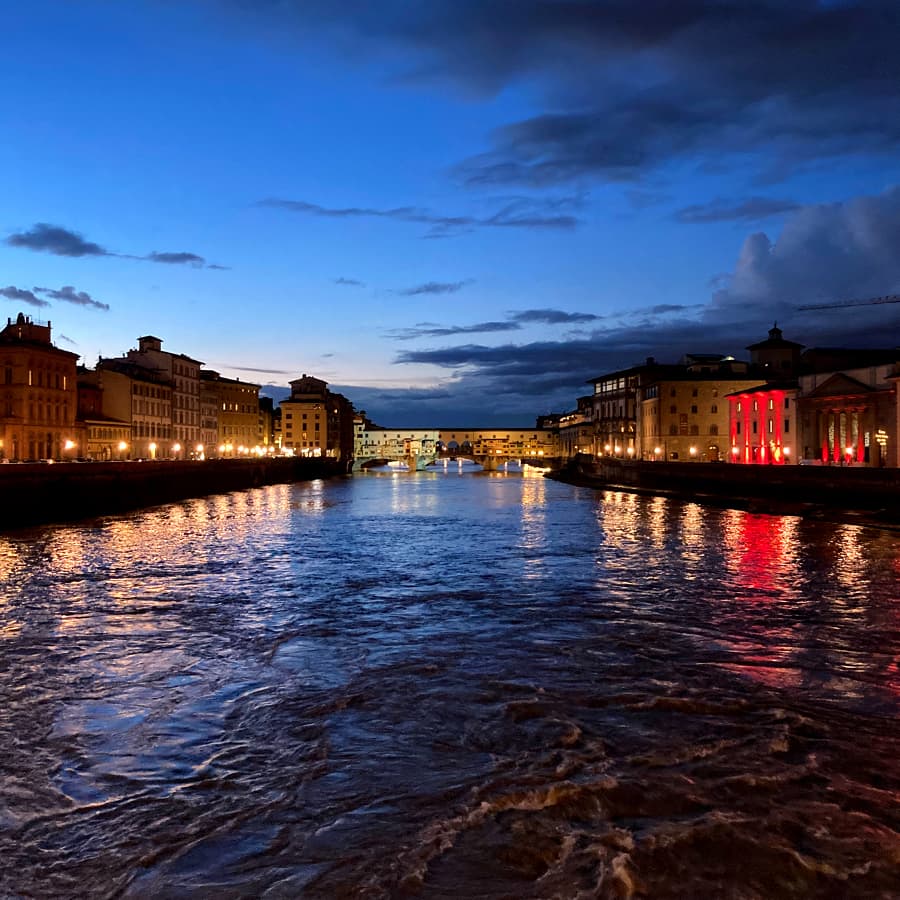 I stared up at the subdued sky with strips of shadowy clouds crowning Florence as I strolled across Ponte alle Grazie. When I reached my spot in the middle of the bridge, I looked over the metal railing at the water cascading over the weir. As the golden light from the lampposts glistened on the rivers surface, I breathed in the cheer emanated by the illuminations on the Ponte Vecchio and the Camera di Commercio.

After tightening the scarf around my neck, I hugged my waist and let my gaze sweep from left to right. I inhaled every time my eyes grazed the Arno. The fresh scent of wet pavement rippled through the crisp air. When I caught sight of the submerged area where the esplanade is, I gasped.

The sky darkened by the minute, sending a chill through me. A few people crossing the bridge admired the view, but only one woman stopped to take photos.

Before returning home, I took a short video of the riverscape. Listening to the sound of the raging water is mesmerizing. I imagine the mighty waters revitalizing Florences energy so she can continue to radiate her creativity, passion, and love to us all.

As I walked toward via dei Benci, I looked on the other side of Ponte alle Grazie. I smiled at the Torre di San Niccolò gleaming red under a dark sky. All the multicolored lights infuse Florence with joy, especially now that the sun retires before five oclock.

With sun shining overhead, I traverse Ponte alle Grazie and head straight for San Niccolò. I hike up the incline to the Giardino delle Rose. When the bells from different churches chime, I pick up the pace and enter through the wrought-iron gate. Breathing in the gardens sweet perfume, my body relaxes. Bright grass and weeds frame the stones on the pathway beneath my feet. The rugosa rose shrubs golden leaves welcome me as I walk by. 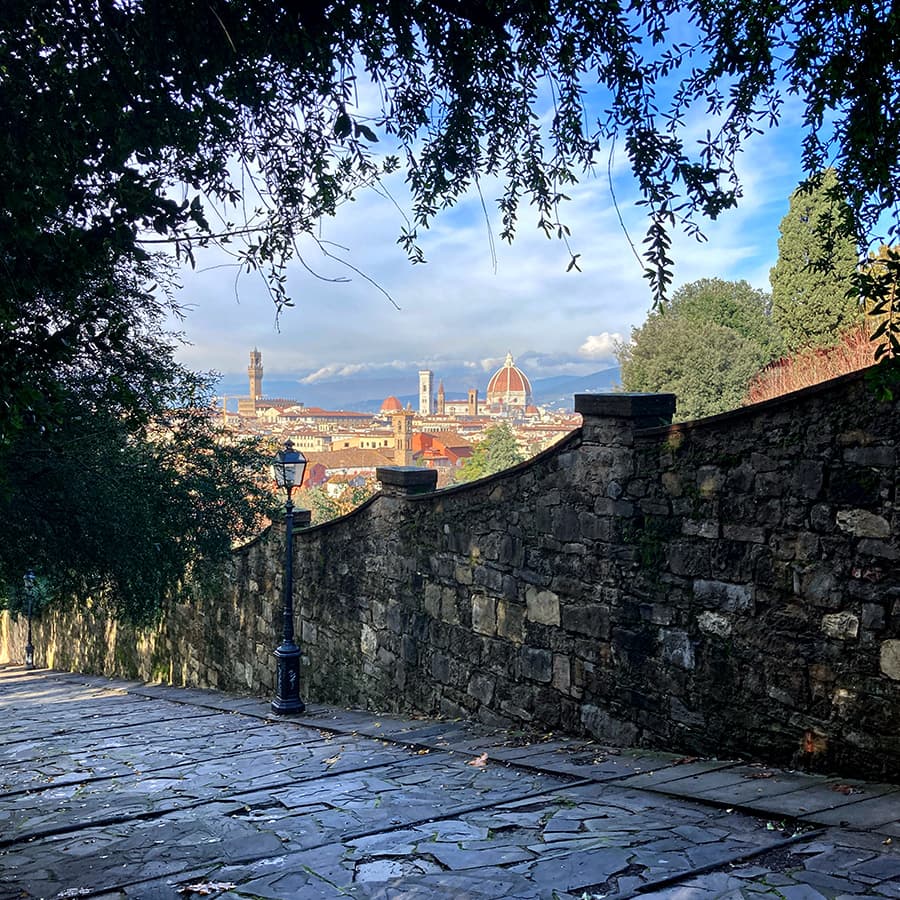 As the bells continue to ring, a wave of gratitude comes over me. Other sounds sneak in as well, like the water trickling in the fountain, hushed voices, the hum of the city, and tiny birds chirping. The chilly air, filled with the scent of damp and fertile soil, revitalizes me with each inhale.

My heart melts when I look down at the grass glistening in the sunlight. The raindrops on the blades of grass appear like diamonds. The sun fades in and out behind a thin veil of clouds, glowing white and then glowing a warm yellow.

I meander around the rosebushes, planting one foot on the ground before picking up the other one. It isnt until I spot a rose that I make a mad dash to it. I delight in the roses with raindrops hanging off its petals. I sniff a few of the blossoms, but their scent is faint. The rose bushes with soggy rust-colored leaves around their base expose their thorny branches. Little daisies sprouting from between tall blades of grass fill me with glee.

One woman walks around the roses in the opposite direction while another woman darts up the path to reach Piazzale Michelangiolo. Two other young women loll in front of the fountain, chatting.

When the church bells ring again, I pause where I am on the pathway behind the fountain. The heartwarming sound creates a link between the city and the garden, thus harmonizing them together.

After circling the Giardino delle Rose many times, going up and down the different paths and orbiting the rose bushes, I opted for another perspective of Florence. I exit the garden at the top and stride down the scalinata to go home. After stopping for a few moments to bask in the view framed by trees and bushes, I sighed.

At four oclock, the sunlight seeped through the clouds and cast a golden light over the city. I cheered at the sun for having pierced through the bleak skies that dribbled water all day. Zipping up my jacket, I scampered down the Arno and delighted in the patches of pale blue sky appearing with every step. My excitement intensified as I headed toward Ponte Santa Trinita, where I went to watch a sunset over three weeks ago. 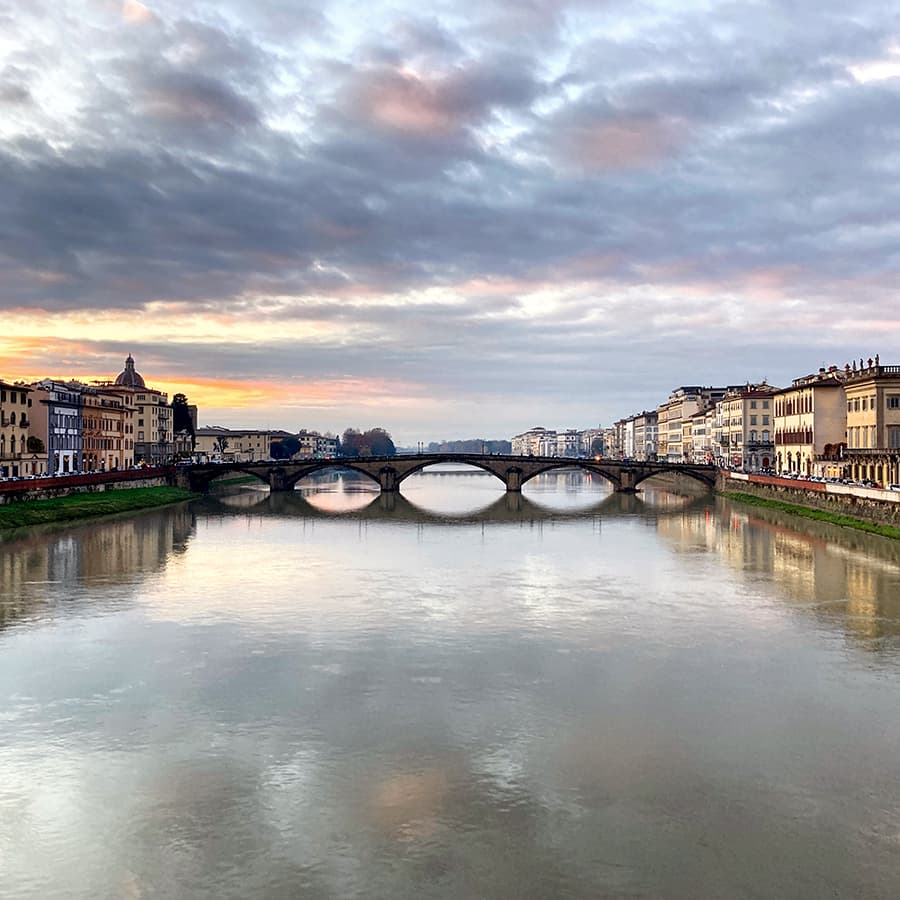 The scent of wet limestone filled the air as I navigated the slick road, zigzagging around people and avoiding dips in the stones. As I made my way under the Corridoio Vasariano, I paused a few times to admire the lights hanging in the windows on the Ponte Vecchio.

The moment I stepped foot on the Lungarno degli Acciaioli, I breathed in its expansiveness. A few bicyclists rode by while pedestrians ambled down the street, browsing shop windows and peering at the Arno.

After I reached the middle of Ponte Santa Trinita, my heart burst open. I snapped a photo of the silvery mist hovering above the river and hugging Ponte alla Carraia. One young woman, dangling a camera from her hand, looked at the riverscape. I thought she too would take a picture, but she continued on her path.

Seagulls flew over the bridge, racing west as if trying to catch up with the sun, while a few small groups lolled against the stone wall, chatting and taking selfies.

The brisk gusts of wind felt refreshing at first, but over time became chilly. As the clouds staggered above, I smiled at the ones with a pink glow on them. The moment a burst of yellow and orange radiated behind San Frediano in Cestello, I pulled my iPhone out of my pocket and took a photo.

I lingered in the sunsets embrace until the sky grew pale. Before taking off, I inhaled the crisp air and let out a sigh. Nestling my hands back into my pockets, I crossed Ponte Santa Trinita and dawdled home.