Beauty seeps into my heart with a single breath every day when I am present with my surroundings. Over the past two weeks, I appreciated so many moments, like when the sun filtered through a window in the dome of San Frediano in Cestello, the Duomo appeared from beyond an olive grove, the Ponte Vecchio materialized through the arches below the Corridoio Vasariano, and the full moon glowed in the sky above and on top of the Arno. Each time that I breathed in Florence, she infused me with a sweet mix of emotions: tranquility, delight, and love.

The moment I reached the corner of Ponte alla Carraia and Lungarno Vespucci, my ears perked up. Hearing the roar of the water flowing over the Pescaia di Santa Rosa hastened my step. I smiled at the long branches bobbing on the surface of the Arno toward the weir.

I positioned myself to the right of the weir so I could watch the water as it cascaded over it. The sound was so loud I couldnt make out what most passersby were saying. Although one young boy walking his bicycle in the bike lane got my attention after he called out to his dad, Guarda!

Rainwater from the eastern hills filled the air with the sweet scent of fertile soil. My heart melted as I noticed how the clouds floating in the sky soaked up the suns last rays. Birds of all kinds flew in both directions: seagulls, sparrows, and black cormorants. One bird with a yellow streak on its tail perched itself on the brick wall above the dam.

The greenish beige water shimmered like silk before crashing into the river and creating a blanket of white bubbles. I enjoyed watching the water swirl around a few times as if not wanting to go to the sea right away.

When the chilly air whipped past me and tousled my hair, I zipped up my jacket and tightened my scarf. The wind blew me back toward Ponte alla Carraia. Every few steps down Lungarno Vespucci, I peered at San Frediano in Cestello across the river. I stopped along the brick wall when the sun was directly behind the church. I gasped at the sunlight bursting above the dome and through the churchs windows.

While relishing in the view, I took a few photos. A woman startled me after she rushed up next to me. She leaned over the cement wall and photographed the church. She smiled at her camera and then at me before continuing on her journey.

When San Frediano in Cestellos faint bells chimed and wafted across the river, I took in a few deep breaths as Florence held me in her embrace. It wasnt until after the sun faded behind the church a few moments later that I headed home.

Yellow is the color of spring as displayed by the mimosas, buttercups, jasmine blossoms, golden moss on olive trees, dandelions, and clusters of leaves sprouting from branches. 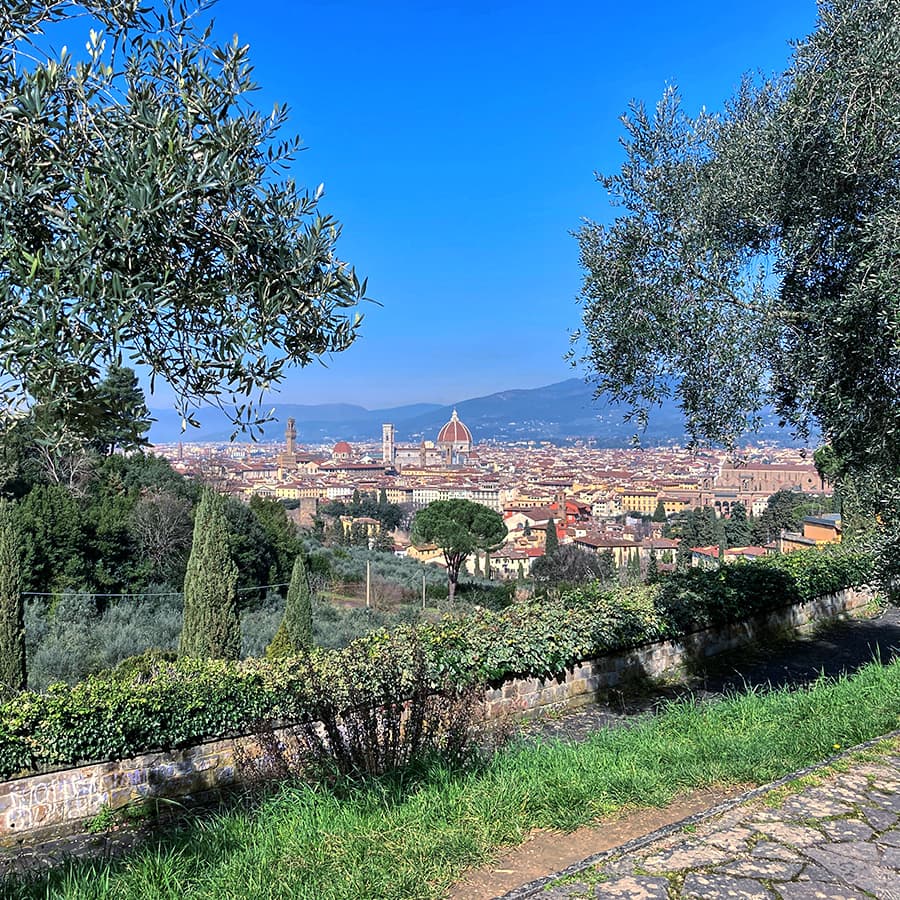 On my run down Lungarno Cellini this morning, I relaxed my shoulders by dangling my arms. I welcomed the cool air with its hint of sun floating past me. The hushed sound of the river uplifted me as I zigzagged around the pedestrians and bicyclists near the Terrazza Marasco.

As I made my way up the winding avenue, the frost-covered weeds and grass glistened. The sunlight glowed through the tall iris leaves and the bushes bordering the trail. Instead of encountering only runners, I spotted many couples occupying the habitually empty benches tucked behind the trees. While spring inspires nature to flourish, she nudges us to open our hearts.

When I arrived at Piazzale Michelangiolo, I detected the faint sound of church bells. I walked past the fountain across the street from David and continued to my favorite spot below Viale Galileo.

I sat down on the stone pathway, stretching my feet onto the grass. As the sun warmed up my back, I gazed at Florence just beyond the olive grove. No matter where I looked, my eyes returned to the golden sphere atop the Duomo. I couldnt help but smile at the glistening star dominating the city.

A row of bushes behind me muffled the sounds along the viale. When there was a lull in traffic, I enjoyed the silence. Every time I tuned in to a chorus of birds chirping from the cypresses and olive trees, my heart bounced in my chest.

When the church bells chimed again, I jumped up. I relished their sound as it wafted in the air and savored the rich scent of nature bursting to life. After they no longer whispered through the trees, I headed to the gravel path below San Miniato al Monte. After passing Piazzale Michelangiolo, I ran down the tree-lined avenue and back into the arms of Florence.

I find great solace in the gardens, but this afternoon I ventured to the Ponte Vecchio, where I stood above the river at its narrowest point in Florence. 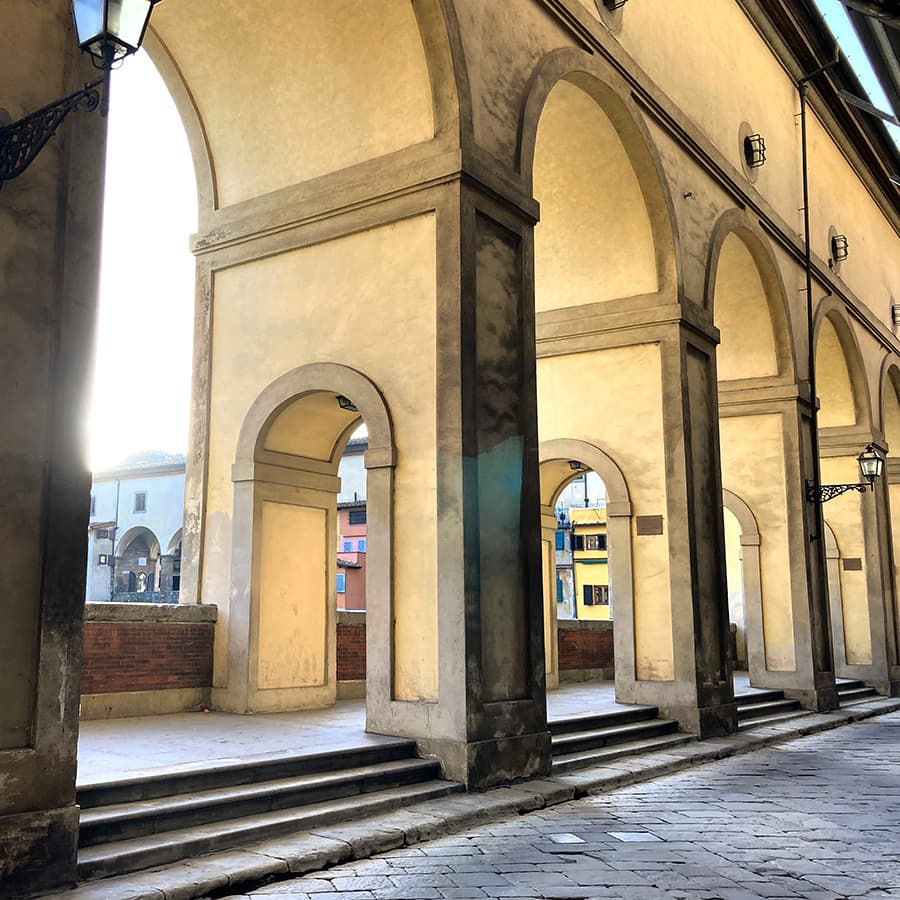 I made my way to Lungarno Anna Maria Luisa de Medici, where the Uffizi was on my right and the Arno was on my left. The sun hung above the buildings along Lungarno Torrigiani where it glowed in the sky while a faint outline of the moon loomed above the Uffizi. I smiled at couples straddling the brick wall above the Arno to face each other and one man reading a book with his back against a lamppost.

I stood next to the water fountain under the Corridoio Vasariano. Opposite me was Cellini, who surveyed the goings-on from the corner of his eye. The hazy sky hid the hills beyond the tall trees in the Parco delle Cascine.

As I leaned against the stone barrier, I unzipped my jacket. Pedestrians walked by with their jackets open and their scarves flapping around their necks. No one could resist the delight of the sun-kissed air brushing against our bodies. A woman lugged a suitcase behind her, rattling between Cellini and me, and stopped to peruse the flashy necklaces in a brightly lit display case.

After I turned around to look at Ponte alle Grazie, I leaned over the wall where the pale yellow buildings on Lungarno degli Archibusieri shimmered on the Arno. Seeing the rowers make their way to the Ponte Vecchio and hearing their oars pierce the water filled me with glee. Black-headed gulls soared high in the sky while pigeons pecked near my feet, hoping to find a few crumbs.

Bicyclists zigzagged through the crowds, and couples pushed strollers across the bridge. Two guys milled about offering red roses from the bouquet they held in one hand. A police car coasted over the bridges stones while pedestrians strolled in a leisurely pace.

Before the five oclock bells rang, I headed home. As I walked alongside the Corridoio Vasariano, the sun glinting above the Ponte Vecchio caught my eye. When I turned around, I breathed in the unhindered view for a few moments.

At the beginning of the blue hour, I spotted the moon nestled between the cross and the buildings encircling the Duomo. With a shopping bag in one hand, I rushed toward the Arno. The shops along via Por Santa Maria lit up the street. My heart pounded in my chest as I zigzagged between the pedestrians and slow-moving cars. 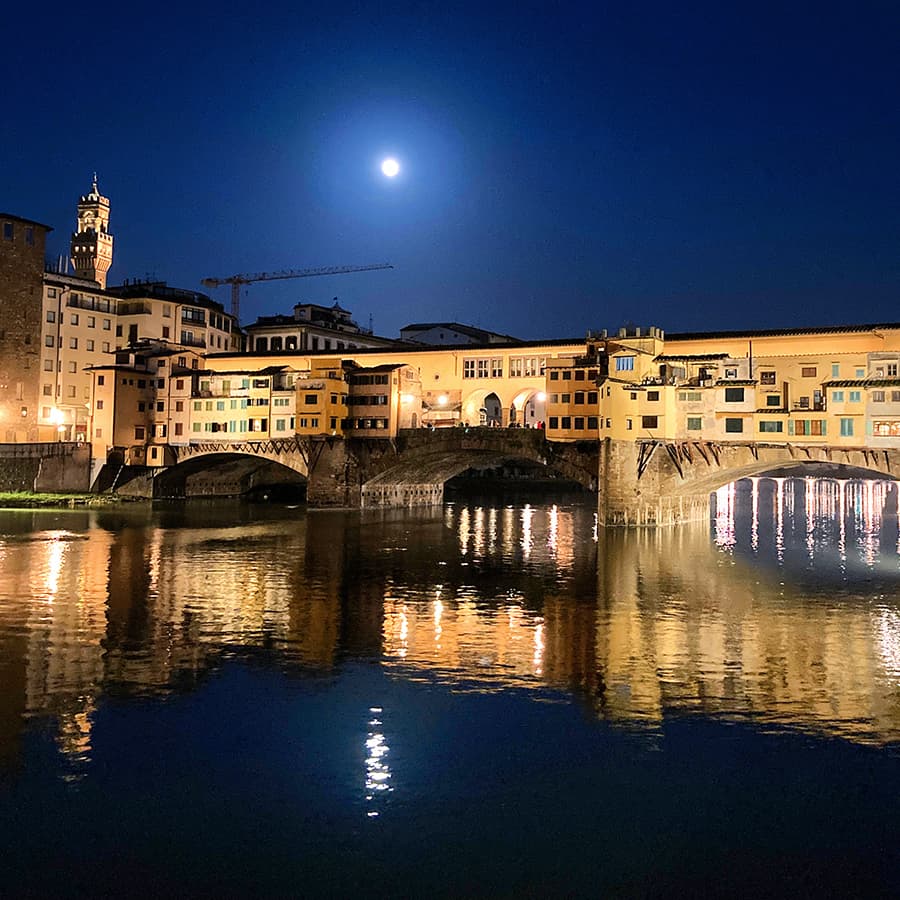 As I marched through the open section of the Ponte Vecchio, couples and small groups of people leaned against the low barrier next to Cellini and underneath the Corridoio Vasariano. I chortled when I peeked through the archway and spotted the moon shining above the Uffizi.

I bolted down Borgo San Jacopo, hopping into the street to pass up a man texting while walking on the narrow sidewalk and a couple strolling arm in arm.

I hurried down the steps to reach the terrace above the river in between a hotel and a posh B&B. In the poorly lit area, I noticed one woman gazing at the moon while talking on the phone. I smiled at her before standing in front of her to take a photograph of the Ponte Vecchio.

After snapping a couple of photos, I moved back to let her have an unobstructed view. I leaned my hip against the metal railing between two bushes in rectangular pots. She stood next to me and looked at me. È bellissima. I glanced at her for a moment. Sì, è imbarazzante. Her eyes glistened with joy

Another man arrived and snapped photos behind us. When no cars or scooters passed by, my mind drifted off with the soft sound of the water lapping against the buildings and voices reverberating along the river.

When I was alone, I breathed in the sweet scent of the shimmering Arno. A cool breeze swept past me, infusing me with a great sense of hope and tranquility. Focusing on the moon lighting up the sapphire sky cracked open my heart even more.

When the skies turned black, I headed toward the Ponte Vecchio. I couldnt wait to get home to share tonights full moon.