In the first half of June, summer came into full swing. The days are longer, the temperatures are higher, the colors are brighter, and the streets are more crowded. Strolling outside of the city center and visiting the gardens is a delightful way to tap into Florences true essence.

Along Viale Poggi, I marched past the cars parked in single file up the winding road, glimpsing the Duomo through leafy trees. As I approached the open gate of the Giardino delle Rose, a mellow breeze encircled me with the sweet-smelling perfume of roses. Upon stepping onto the pebble path, my pace sped up.

Below the terrace where visitors were snapping photos of the panorama, I paused next to a rosebush with yellow roses. The green lawn was a backdrop for the bursts of color sprinkled throughout the garden. My eyes jumped to the clusters of red, white, yellow, orange, pink, and fuchsia roses, which were of different shapes and sizes.

Hopping onto the grassy area, I rushed toward the rosebushes, dipping my nose into the open blossoms and avoiding to step on the rose petals scattered at the base of the bushes. The roses smelled of lemons, apricots, vanilla, and plums, which I savored by inhaling them a few moments longer.

Fluffy clouds drifted across the sky, letting the sun shine through tiny openings that highlighted pockets of the city. The air warmed up quickly as the sun burst through the clouds.

After the 1pm church bells chimed, most of the visitors exited the gardens. For at least ten minutes, I pranced through the gardens alone, darting from one rosebush to the next and sniffing as many roses as I could.

When a small group arrived to meander around the rosebushes, I sat down on a cement bench below the stone wall. I chuckled at how my knees were higher than my waist.

The roses perfume swirled around me, infusing me with a tranquil sense of joy. Bees dangled their legs in front of inviting blossoms and gracefully crawled on their petals. I smiled at the tiny red thorns along the branches, where green leaves fluttered in the wind.

Before exiting the gardens, I zigzagged between the rosebushes one last time. When I spotted the Duomo above the yellow and red rosebuds, my heart cracked open. I took in a deep breath and felt the gardens beauty nestle itself in my heart.

A steady breeze swept past me as I stood in the middle of Ponte Santa Trinita. The sun glowed above a thick ribbon of gray clouds, and an orange haze sat above the hills to the west. Sandwiched between two couples facing the Ponte Vecchio, I propped my legs against the bridges limestone barrier and stared into the distance. Most of the people chatted amongst themselves, observing the passersby. Only a few watched the sun as it set. 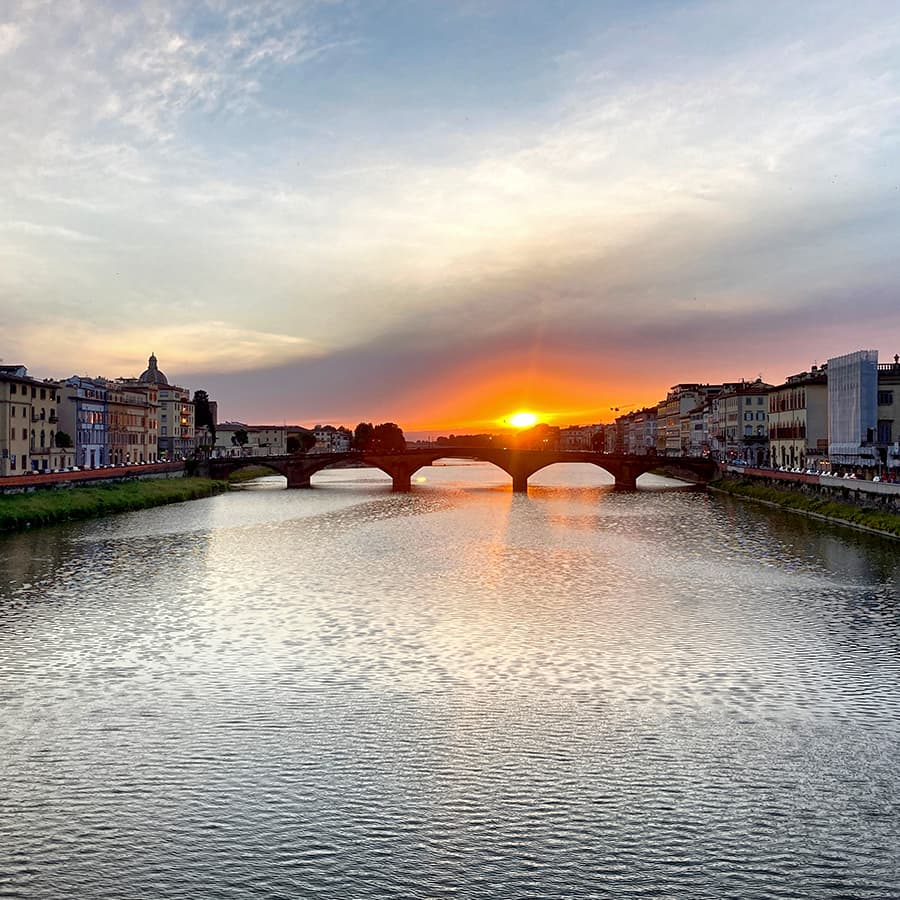 Bikes zipped by, ringing their bells to announce their arrival behind the pedestrians walking in their lane. Swallows flapped their wings and squeaked as they circled overhead. I looked back at the Ponte Vecchio, almost colorless compared to the sunset. One large group of friends caroused on the other side of the bridge. Beer bottles and open pizza boxes sat on the barrier as music blared from a portable speaker.

When I turned back around, I stared at the ripples on the river. A sense of calm washed over me. As I focused on the riverscape, everything going on behind me seemed to vanish. When I engage fully in a moment, I find joy. And in that joy, I feel my connection to Florence.

The meadows on both sides appeared unruly, with overgrown grass and weeds. As the sun crept down the sky, it reappeared as an orange ball further north, extending sharp rays of light. The lampposts along Ponte alla Carraia gleamed.

Within a few seconds, strokes of lavender and pink bled through the clouds and spread throughout the sky. A large fish popping out of the water distracted me for a moment.When the Arno and the skies became a cool blue, my heart melted. As they embraced the city, they allowed it to sparkle before the sun departed for the day.

Only a few moments after nine oclock, the wind subsided, and the sky grew dim. On my walk home, small groups lined up against the brick wall flanking the river. The lampposts flickered a gentle light that became brighter. Before I turned off the lungarno, I glanced at San Miniato al Monte and smiled.

The morning began with swallows circling under the wispy clouds as sparrows chirped from rooftop nests. Even though the sky became overcast, I rushed outside. As I crossed Ponte alle Grazie, sprinkles of cool water fell from the sky. Unwilling to pull out my umbrella, I pointed my face to the sky and let the rain caress my cheeks. The scent of wet pavement filled me with glee. 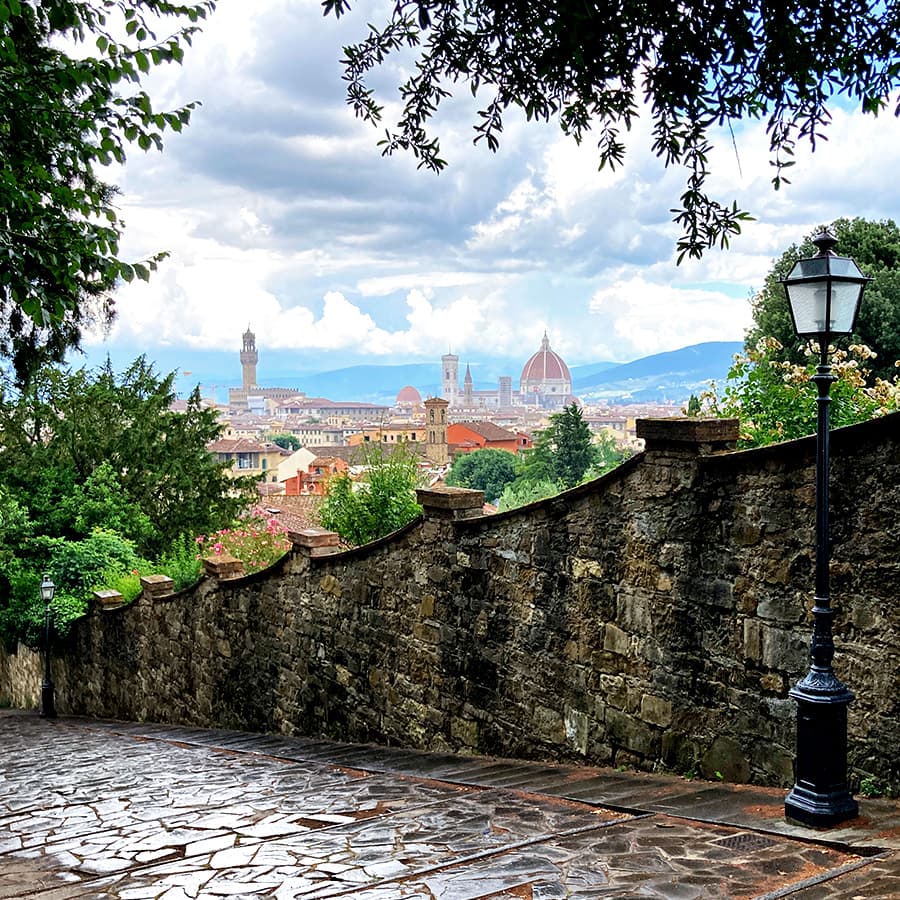 After I arrived inside the Giardino delle Rose, the colorful rose blossoms, weighing down the rosebushes stems, startled me. Many of them were inches from the ground. I smiled at the raindrops plucking petals from the flowers to buffer their descent to the stone pathway.

With my eyes closed, I inhaled the sweet delights of the grass, dry leaves, and roses. I tromped through the garden to admire the brightly colored roses shimmering above the bright green lawn. Two young women sat under the bushy hazelnut tree eating lunch. The soft whisper of rain became a steady hum, drowning out the singing birds.

Meandering around the rosebushes, all I could hear was the rain. The pitter-patter of the water falling on the rose leaves filled me with serenity. A blackbird hopped past me with a worm dangling from its beak. I smiled when a robin arrived a few meters from me before flying away.

Approaching the top of the garden, I headed to the scalinata where I took cover under the tall cypresses. My heart embraced a clear view of the cityscape. I reveled in watching the rainfall at a distance.

The sky became opaque and the cityscape a blur. It wasnt until the water fell even heavier that I pulled out my umbrella. The clouds appeared motionless as they poured more water on Florence. When Santa Croces church bells rang, my shoulders relaxed.

With only two tiny patches of blue sky, the rain subsided. Nearby construction workers resumed sawing and hammering, and a few couples reappeared. The suns glow warmed up the air almost instantly. The scent of the roses became even more intense. On my way to the exit, I paused in the middle of the lawn and inhaled a few times. The gardens intense perfume embraced me and permeated my heart. I came to revel in the roses and ended up relishing in the rain.

When I reached the top of the scalinata, I drifted away from Piazzale Michelangiolo. Groups of people milled around it, basking in the expansive panorama. Cars, trucks, and motorcycles hurried by in both directions, not lending to the tranquility of my surroundings. I walked down wide sidewalk flanking Viale Galileo, weaving through evergreens and past olive groves above the city. 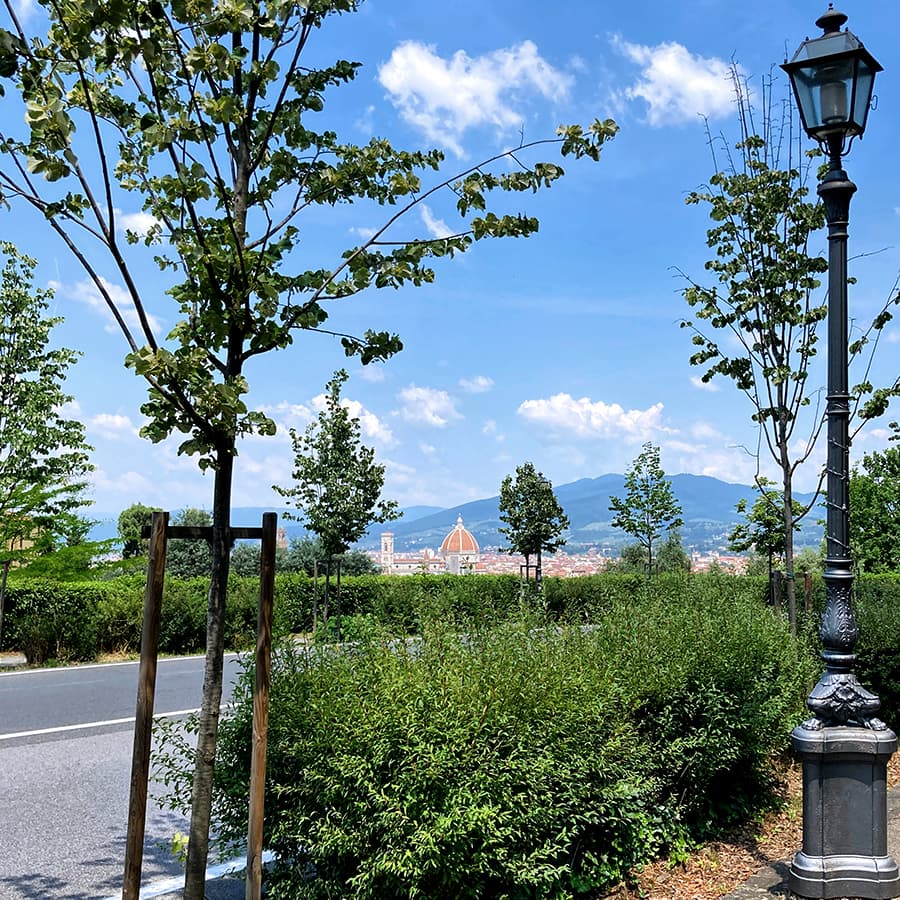 A small group of runners raced next to me along the walkway full of cracks and crevices. I smiled at a couple marching up the white marble steps to San Miniato al Monte. When traffic slowed down, I could hear the blackbirds chirping from the wooded areas.

A bay laurel hedge bordering one side of the sidewalk and scanty bushes on the other side accompanied me on my stroll. A light breeze coursed through my hair and made long tree branches bob up and down. The moss covering the stone barrier that was translucent green a few weeks ago has now become a mustard color. The air had no temperature of its own: it warmed up in the sun and cooled down in the shade.

I entered a small area where immense cypresses pointed up to the sky. As I wandered down the dirt path, I breathed in the sweet scent of the woods. My eyes followed a bright yellow butterfly dancing overhead. I marveled at how the stone pine trees formed billowy masses, like clouds, with their crowns. The faint sound of the basilicas bells rang, enhancing the serenity of the moment.

When I reached Piazzale Galileo, I headed back. I glimpsed the city from between the trees across the avenue. I paused when I spotted the Duomo nestled between a linden tree and a lamppost. Whiffs of an unseen jasmine bush swirled around me.

With every step toward Piazzale Michelangiolo, my smile widened. After I passed San Miniato al Monte, Florences monuments came into view. The Synagogue, Santa Croce, the Duomo, San Lorenzo, and the Palazzo Vecchio.

I delighted in imagining the missing pieces of the city from afar. When I saw them all together again, a surge of joy rippled through me.