In July, locals flee to nearby beaches and mountains for their summer break. As temperatures soar, tourists wander around town to enjoy Florences delights. While crowds fill the streets, I opt for brief excursions around my beloved city. My favorite moments are when I savor the tranquility of the gardens and bask in the cool air above the Arno while watching the sunset.

A warm breeze, carrying the Arnos tranquil energy, brushed past me as I traversed Ponte alle Grazie. The sun appeared like an immense golden ball above the Ponte Vecchio. My initial thought was to watch the sunset closer to the water, but soccer fans had gathered along the beach area at a makeshift bar. Large groups of people sat at tables positioned in front of a big screen playing highlights of the two previous matches.

People of all ages scurried along the sidewalk before the next match began. Excitement and anticipation swirled in the air.

When I arrived at a spot along Lungarno Cellini where oak and poplar trees framed the Duomo, I sat down on the low brick wall and leaned my back against the lamppost.

I inhaled the scent of the humid meadow along the Arno where wild grass, taller than me, swayed in the wind.

The kickoff coincided with the sunset and the chiming of the church bells. I took it as an auspicious sign. My eyes welled up when I heard so many people singing the Italian national anthem from different areas along the river, including a few apartments next to the street.

As the sun dipped behind the buildings, the cityscape became a silhouette, with the sun shimmering through the trees leaves. The sky became a canvas where the sun splashed warm hues across it. My heart melted when I glimpsed the shadow of the Santa Croces Campanile on the Arno.

After about thirty minutes of play, a roar echoed throughout the city. Fans cheered, applauded, and tooted their horns; cars honked as they drove over Ponte San Niccolò.

The suns warm orange glow inspired most people to look, but only a few photographed it. One woman with a cigarette dangling from her mouth leaned in front of me to take a photo of the view.

After the first half ended a blanket of serenity lingered in the air. A handful of cars passed along the two-way road while food delivery cyclists zipped by.

I waited for the lampposts to flicker on across the Arno before heading home, delighting in the blue hour as it began.

Rushing down Borgo dei Greci, I looked past the two street vendors, selling t-shirts and hats, to glimpse Santa Croces façade. A few people milled around the square while others strolled alongside jewelry shops and restaurants, taking advantage of the narrow strip of shade. At 11am, the sun had almost reached the summit of the basilica. 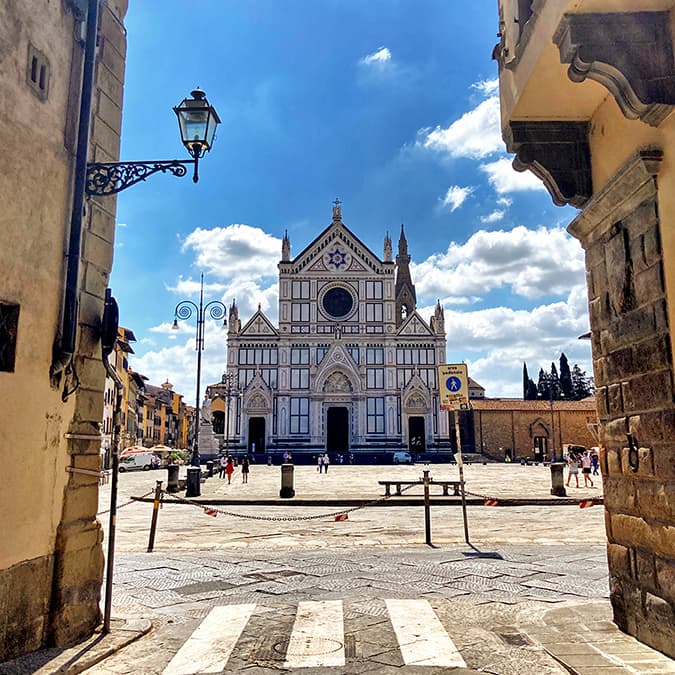 The air warmed up as I passed the taxi stand packed with white cars. As I stepped up onto the piazza, I glimpsed the fountain behind me. With no cars parked in front of the chain that bordered it, I crossed the street and stood on the sidewalk. I marveled at the expansiveness of the piazza. Pigeons and sparrows pecked at the stones in search of crumbs. As the sun pierced through my clothes, I sought cover.

I turned the corner of Via Torta in search of shade. The sun beamed overhead, casting a bright white light onto the basilica. My eyes relished in the details of Santa Croces marble facciata. The basilica framed by two buildings filled my heart with joy. Its as if the city naturally embraces her most cherished monuments.

I stepped back and raised my iPhone. In my first photo, the hood of a red truck appeared. A bicycle with bags of groceries in its basket passed in the opposite direction before I took another shot.

The restaurant terrace was preparing for lunch. Silverware clanged and glasses chimed. The scent of sauteed onions and sweet tomatoes whirled around me.

A soft breeze scurried past as waves of heat wafted up from the pietra serena (gray sandstone). I hurried across the street as a bus careened toward me. Visitors teetering around the piazza gave off a relaxed vibe. I slowed down my pace even though I was running late for my appointment. I smiled at couples sitting on covered terraces, enjoying their coffees and pastries while perusing their guidebooks.

Before passing Dante, I paused. I scanned the entire piazza, from the shady areas to the empty center. A wave of gratitude enveloped me when I spotted where I stood only a few minutes earlier.

Throngs of people lined Lungarno degli Acciaiuoli on both sides. I spotted only a few empty seats on the bars terrace and a couple of vacant spots along the brick wall. The pastel-colored sky was aglow. I zigzagged around tourists taking impromptu photos of the cotton candy clouds that embraced the city. 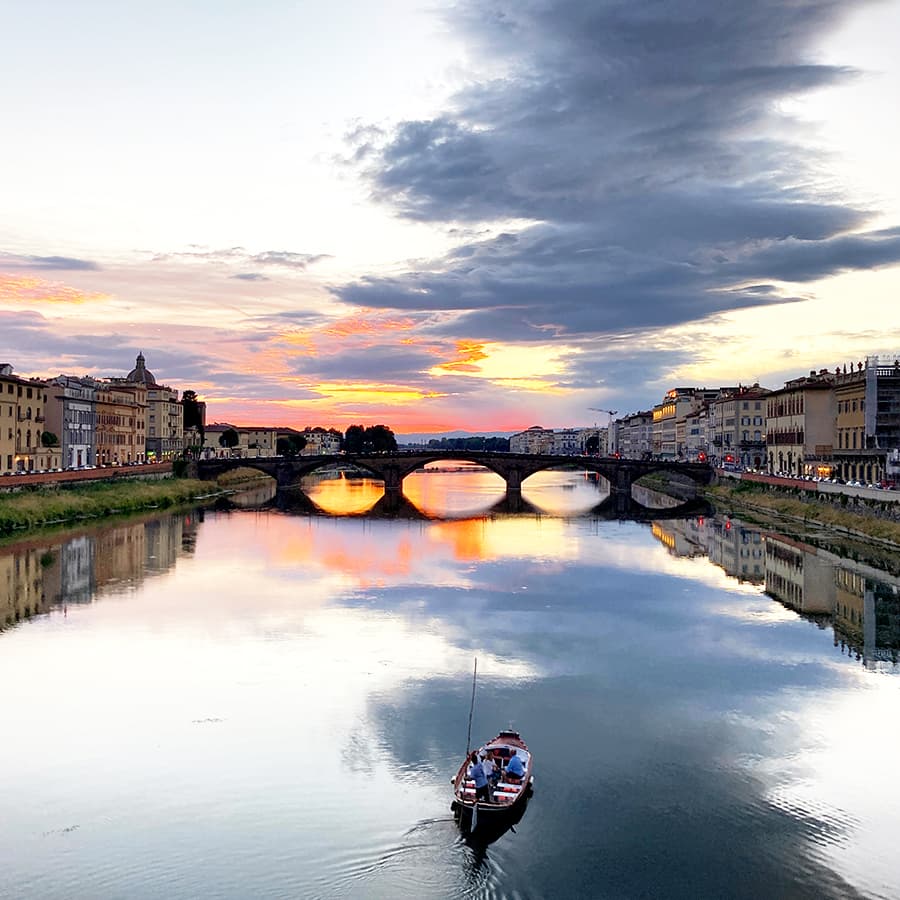 A guitarist, singing in front of Cellini on the Ponte Vecchio, filled the humid air with his voice. Determined to arrive on Ponte Santa Trinita, I plotted my path through the crowds, sometimes jumping onto the sidewalk to avoid oncoming bicyclists and pedestrians pausing abruptly.

When I arrived at my spot on the bridge, I took in a deep breath and sighed. The Arnos delicate scent of grass and water lingered in the air, filling me with tranquility. With a golden streak of sunlight along the horizon ablaze, a thick snake-like cloud staggered across the sky.

As the half moon shined brighter by the minute over my left shoulder, I gazed at the sunset. A family crowded around me to photograph the spectacle. One toddler, who leaned against my leg, made me chuckle. She too lost herself in the sunsets magic.

My heart raced when a renaiolo carrying wide-eyed tourists sailed west toward Ponte alla Carraia. The sand digger boat cut through the glossy surface of the water where specks of light shimmered and reflections of the riverscape gleamed.

Onlookers took off after the sun disappeared. I remained in place until the lampposts along the river flickered. As I ambled home, I looked back at the royal blue sky to admire the moon sparkling on the water.

The sky rumbled in the west as I crossed Ponte alle Grazie. Once inside the Giardino delle Rose, I scanned the rose bushes for roses. The church bells rang at half-past eleven as the thunder grew louder. Large raindrops splattered on the stones, leaving behind gray blotches the size of a quarter. 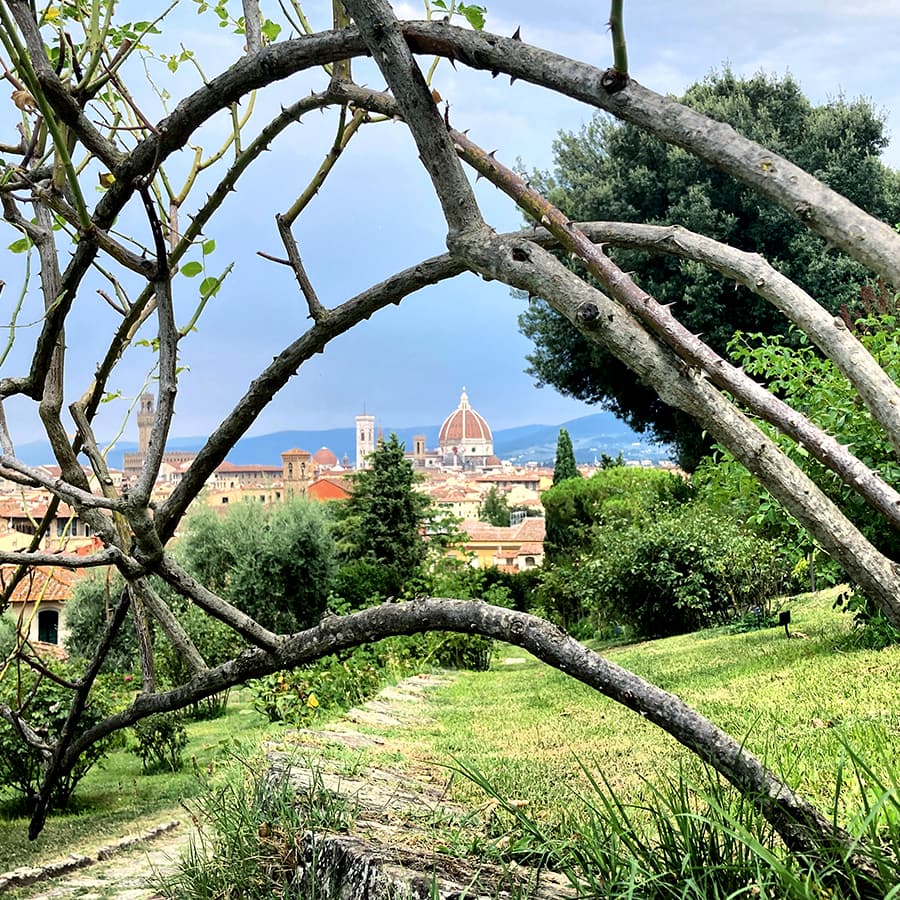 I took cover under a linden tree brimming with heart-shaped leaves. The cicadas song muffled the sound of the water trickling in the fountain. A few voices from the scalinata wafted over the stone wall. After leaning back on the wooden bench, I sighed.

A blanket of gray clouds covered the sky, highlighting the pastel-colored buildings. The delicate melody of raindrops tapping the thick green leaves overhead filled me with glee.

Visitors either exited the gardens or took refuge at café tables positioned under white umbrellas. The rain fell swiftly, not allowing anyone to go far without getting drenched.

A resounding grumble passed even though the clouds appeared immobile. Intermittent gusts of wind did nothing to take away the sticky air. However, it brought with it the fragrant scent of wet grass and leaves.

One man walked down the stone paths with his camera at the ready, holding it with arms raised at shoulder level. He snapped photos of the garden and the view of Florence before exiting.

A flash of lightning above the Torre di Arnolfo startled me. Only a few moments later, thunder rumbled so loud that it reverberated in my chest. Santa Croces church bells rang undisturbed by the summer storm.

When the rain became more of a drizzle, I marched down the stone steps to admire the handful of roses in full bloom. Their colorful petalsfuchsia, orange, white, red, and yellowattracted my attention. Two blackbirds hopped on the lawn, poking their beaks into the soil, and flew away as I darted past them.

Raindrops fell on my skin, refreshing it for a few seconds, and then evaporating. I dipped my nose into the roses scattered around the garden to savor their sweet perfume before heading home.