As fall arrives, the temperatures are lower, the light is cooler, and the air is milder. Florence adapts to a new rhythm. On some days, fewer people roam the streets and on other days, the streets are bustling with crowds of people arriving in the morning and leaving before sunset. Besides heading to the gardens and San Miniato al Monte, the sunsets offer much tranquility and delight. Between the golden light and the blue hour, the sun splashes vibrant colors across the sky at sunset. To breathe in the riverscape from a bridge or the cityscape from afar is a pleasure I indulge in whenever I can.

A mild breeze flowed from the west as if the sun were exhaling. As I faced San Frediano in Cestello, a canottiere glided toward the weir, turned around, and returned to where he came from. When the rowers oars sliced into the river, he pulled them back with all his might. His boat jerked forward, passing near the suns shimmery reflection on the water.

My fingertips grazed the bridges limestone barrier. With my eyes half open, I inhaled as deeply as I could to savor the Arnos crisp algae scent. As I breathed out, my shoulders relaxed.

Everyone seemed to be in a hurry. Individuals, couples, and small groups shuffled their feet along the sidewalk behind me. Leaning toward the sun, I turned my head slightly to listen to the river. The water lapped onto the meadows as if kissing the overgrown grass. A flock of cormorants flew high in the sky, not making a sound.

The milky clouds blurred the sun and dimmed its light. Behind me, the intersection was not as serene as the riverscape. Buses clanged down the rocky pavement, an ambulance howled across the bridge, bicyclists rang their bells, and at least one car honked when the traffic light turned green.

A handful of us, standing meters apart, on Ponte alla Carraia admired the Arno. Half of us facing the Ponte Vecchio, the other half watching the sunset.

Nothing deterred me from watching the sun as it slid down the sky, bidding us farewell. A domani, I whispered as it hid behind the mountains.

Along Viale Michelangelo where I run, cypresses line one side of the paved path while lamp posts the other side. The morning sun cast long shadows, almost touching my feet. Running in Florence is when I feel most connected with her. With every inhalation, her energy permeates my body and pulses inside of me. And with every exhalation, I send her my love. 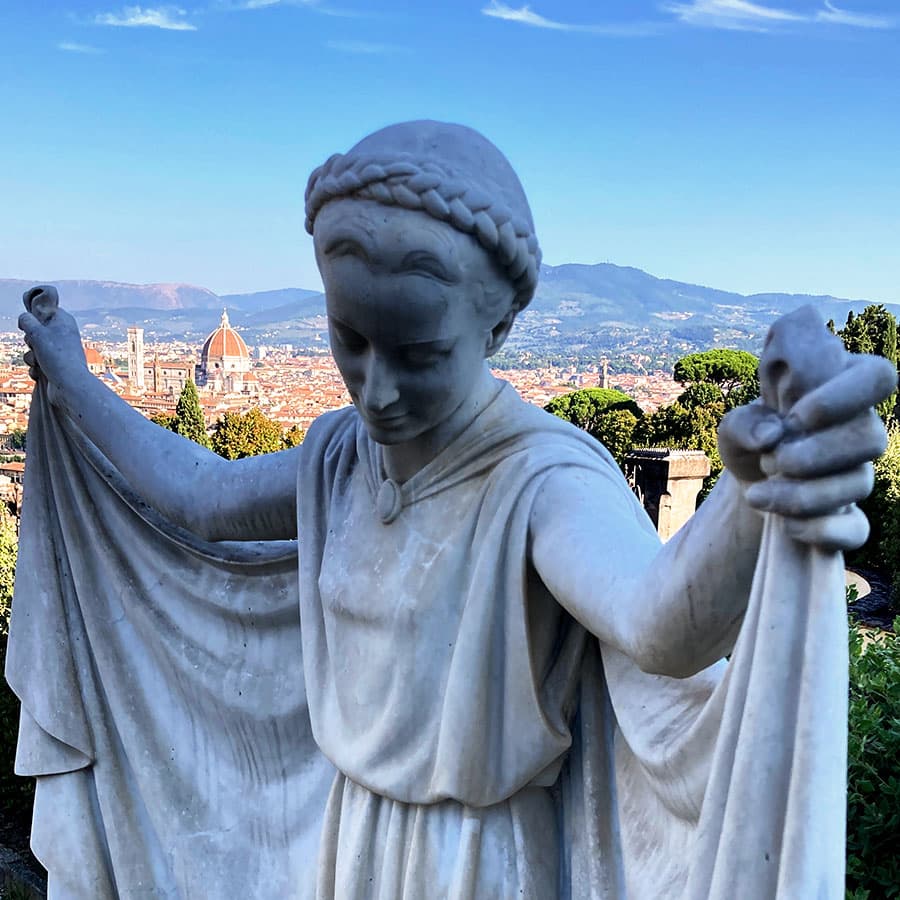 At a lone oak tree, I stopped to admire one of its leaves in my hand. Walking up the avenue where tall Tuscan pine trees stood in pairs, a thin mist hovered above the countryside.

I examined the irises, hibernating until next spring. Their green stalks had faded and turned beige. Sniffing the air, I reveled in the fragrant scent of the soil, damp from the previous days rain.

After two runners raced by, I sprinted up to Piazzale Michelangiolo where David hid behind white sheets where hes being restored. Walking past the stands selling various trinkets and t-shirts, I approached the railing and leaned my hip against it.

When a tour group arrived, I went to one of my favorite spots along Viale Galileo. I sat on the path under an olive tree filled with shiny olives. Bells from many of the churches rang, infusing Florence with serenity and glee.

I navigated the uneven stone sidewalk and hiked up to San Miniato al Monte. Parishioners sauntered up the wide steps toward the basilica. I couldnt keep my eyes off of the golden mosaic on its façade that radiated in the sunlight.

Because the terrace was crowded with onlookers, I entered the cemetery and admired the view from one of my favorite spots where an angel holds the Duomo in her embrace. Standing in the basilicas shadow, Florence appeared to glow in the rising sun. When I glimpsed the sea of terracotta rooftops and pastel buildings, my heart expanded. This is my home. While the bells chimed before mass, I headed down the steps and ran down to the river.

Church bells chimed as I crossed Ponte alle Grazie. The brisk, warm gusts of wind tousled my hair. Determined to arrive at the Giardino delle Rose, I didnt pause at the incline after passing through Porta di San Miniato al Monte. As I passed three teenage girls trudging past via dellErta Canina, one of them placed her hands on her hips and watched me enter the garden. 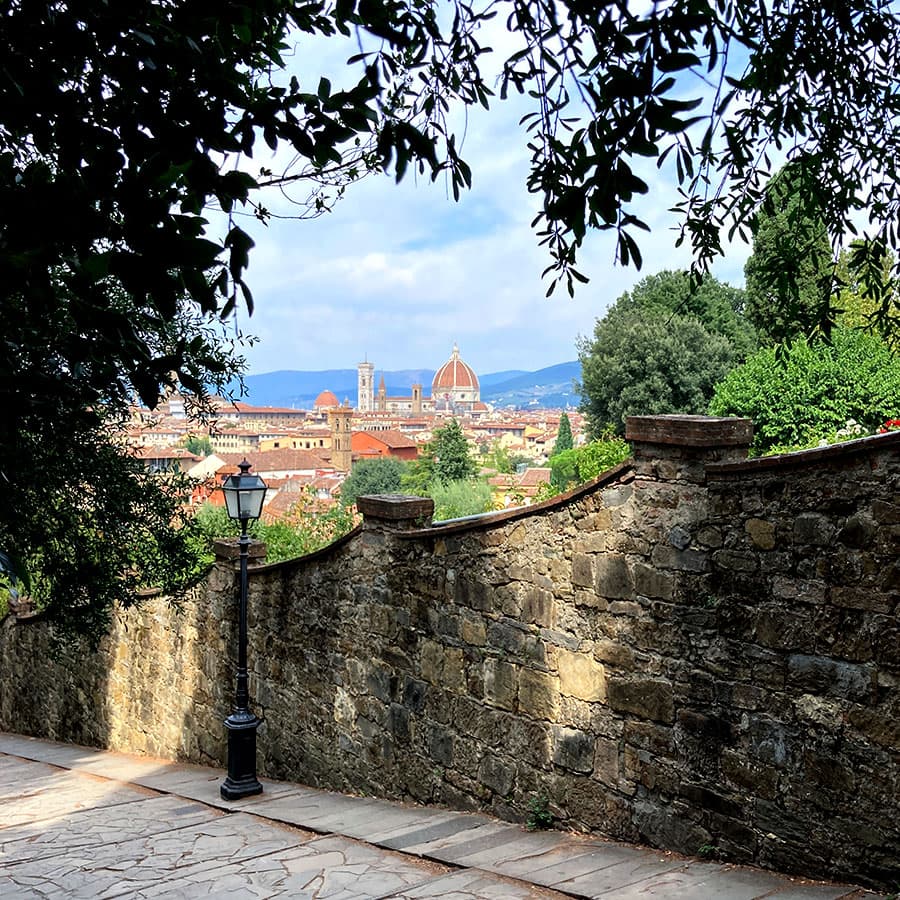 A veil of clouds staggered across the pale blue sky. As I stepped onto the grass, I noticed a group of people gathered near the fountain. The women wore colorful dresses and high heels, accompanied by men in light-colored jackets and loose ties. Children ran around the rose bushes, shrieking with joy.

When I spotted three flags representing Florence, Italy, and Europe standing near the terraces metal railing, I realized people were getting married under the white tent.

I sat on a wooden bench next to the terrace under a leafy linden tree to watch the ceremony. As the Duomo glowed under a diffused light, I caught a whiff of the roses and cypress trees.

A piece of classical music, coming from small speakers, floated in the air. Friends and family, standing in front of plastic chairs, cheered as soon as the bride arrived.

As the music softened, the couple sat down and the master of ceremonies gave some details about the Giardino delle Rose, which she said was a masterpiece in Florence, the città dei fiori (city of flowers). She talked about how Jean-Michel Folons Partir sculpture of an open suitcase represented a voyage and explained how getting married was like a voyage of two people meeting and continuing their lives together.

When the wedding concluded, all the spectators applauded and wished them well.

Gazing at the view of the rose bushes, trees, and grass below the cityscape, I thought about how weddings would only add to the gardens already romantic vibe. Upon my next visit, I will not only admire the roses that emanate love but also remember those couples who set sail together from the Giardino delle Rose.

Standing above the Arno facing west, I breathed in the cool, rain-infused air as it swept by, carefully lifting my hair off my shoulders. As the light dimmed, the temperatures lowered, and the mood shifted as the misty breeze created ripples on the water. 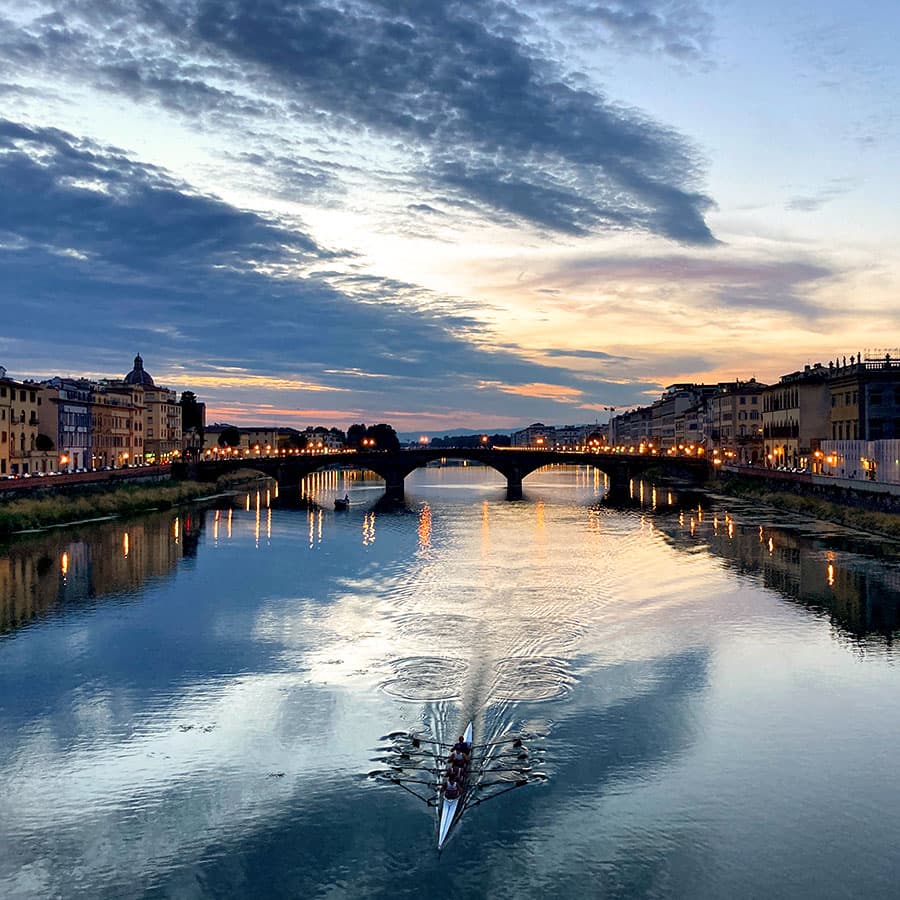 Passersby took slow steps across the bridge, turning their heads to glance at the Ponte Vecchio, peering over the edge of the bridge, and admiring the soft colors painted across the sky. Muffled snippets of conversations drifted by with each person. The mood was mellow, no voice louder than another. Intermittent cars and motorini rumbled over the patchwork of uneven stones as bikes flew by, ringing their bells to announce their arrival.

My eyes remained fixated on the shimmering Arno that absorbed the colors from the sky. Canottieri (rowers) and renaioli (sand digger boats) navigated the river, going past Ponte alla Carraia, turning around and heading back toward Ponte alle Grazie.

The tourists on the renaioli took photos of those standing along Ponte Santa Trinita while the rowers never looked up.

I placed my hand on my heart when the lampposts flickered on. Their pale golden lights, outlining the river, grew brighter with every blink of my eyes. Like twinkling stars decorating the riverscape, I inhaled their joy and felt a wave of tranquility envelop me.

As we celebrate the end of the day, Florence rejoices.