Florence is a museum, a city to contemplate. When walking along her river and through her streets and piazzas, I look at her through my hearts eyes. Always open to embrace more of her beauty. She continually inspires me whenever I watch a sunset from Ponte Santa Trinita, visit the Giardino Bardini, and stroll up to my favorite spot along Viale Galileo. To love Florence is to appreciate her from near and far.

As stated on the Britanica website,The word museum has classical origins. In its Greek form, mouseion, it meant seat of the Muses and designated a philosophical institution or a place of contemplation.

It wasnt until I saw wispy transparent clouds glide across the sky that I rushed outside. I zigzagged my way through the crowd, hopping off the sidewalk twice to get to the middle of Ponte Santa Trinita. I stood a meter from a photographer snapping photos of the Ponte Vecchio. The sun hid behind San Frediano in Cestello, infusing the heavens with her warm light. The cool air lingered on my cheeks. 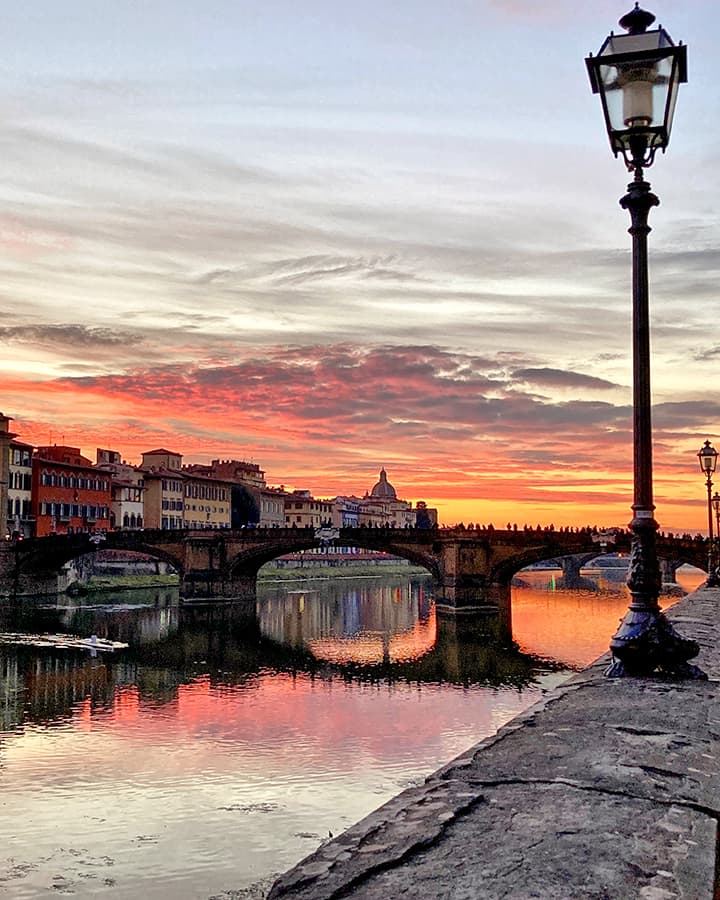 Birds flew so high that they almost reached the clouds. As the sunlight dimmed, a few canottieri (rowers) headed up and down the river, slicing through the wavelets. Circles appeared where fish popped out of the water. The ripples spread out until they disappeared. The clouds absorbed the suns muted light and reflected it as pale yellow, pink, and orange. A wave of serenity came over me, prompting me to take slower and deeper breaths.

After the pastels faded and the skies became gray, I snaked my way through the sightseers along Lungarno degli Acciaiuoli to get home. Walking along the narrow sidewalk, I stopped abruptly when a young woman leaped in front of me. She leaned over the brick wall and took a photo of the sunset. When I saw how the sky glowed magenta and orange, I wanted to run back to Ponte Santa Trinita. I didnt have time to reach the bridge before the intense colors disappeared, so I perched my elbows on top of the wall and savored the sunsets final moments.

As crowds gathered around, their faces lit up. Some stood in an embrace, others took selfies and photos of the sunset. After a small group of friends encircled me, I stepped into the street and headed home. Before I arrived at the Ponte Vecchio, I looked back. I sighed as the streetlights flickered on along the walkway, lined up with people still admiring the sunset.

Wispy clouds graced the soft blue sky this morning. Walking across Ponte alle Grazie, where two men were painting the railing, the sun sat on my face as a cool breeze caressed it. The subdued colors of the buildings and the Ponte Vecchio infused me with serenity. 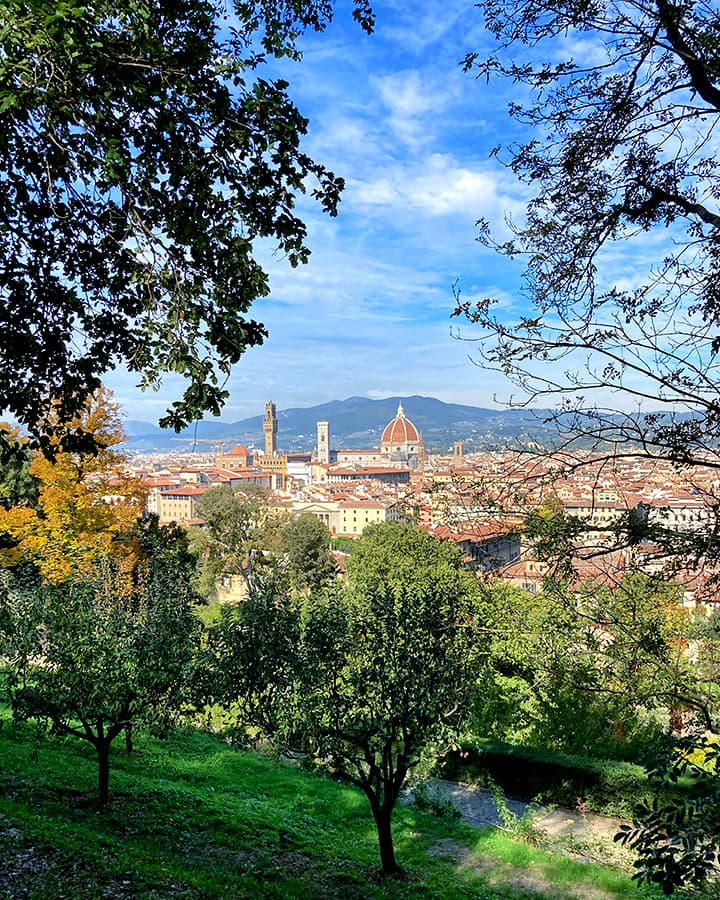 Marching up the gravel path, I heard baby birds chirp from inside the bristly bushes. As I walked past the upper garden below the terrace, a linden trees golden leaves floated in the air like snow and fell on the ground.

I marveled at the wisterias long pods swung overhead as I made my way through the pergola. I paused every time I glimpsed the Duomo centered by the curly vines reaching out to the centro storico.

In the olive grove, I stepped through large patches of nipitella (lesser calamint). Their tiny lilac-colored flowers poked through the grass. My mouth watered as its distinct minty scent brought back memories of sautéed porcini mushrooms with a sprinkle of its chopped leaves on top.

With the citys old stone wall towering behind me, I gazed at the panorama from a weathered bench. The sky was a pale blue that called forth hope and peace. Bunches of dark purple and green olives dangled from the olive trees while hundreds of shiny chestnuts, both in and out of their shells, lay scattered around my feet.

Only a few birds sang their songs from the neighboring trees whose dry leaves whistled every time a burst of wind swept through the gardens. My heart softened when the Santa Croce bells rang a few minutes before noon, followed by those of Campanile di Giotto.

I relaxed my body against the back of the bench and sighed. The fragrant air soothed me while the city held me in her embrace. To fill up on beauty is to fill up on love.

I lifted my arms to brush aside the silvery leafed branches, stretching across the narrow passageway between the olive trees. Reveling in the scent of fertile soil, I took in long, deep breaths. I lifted each foot slowly and posed it on the ground so as not to crush the chestnuts and olives scattered about. 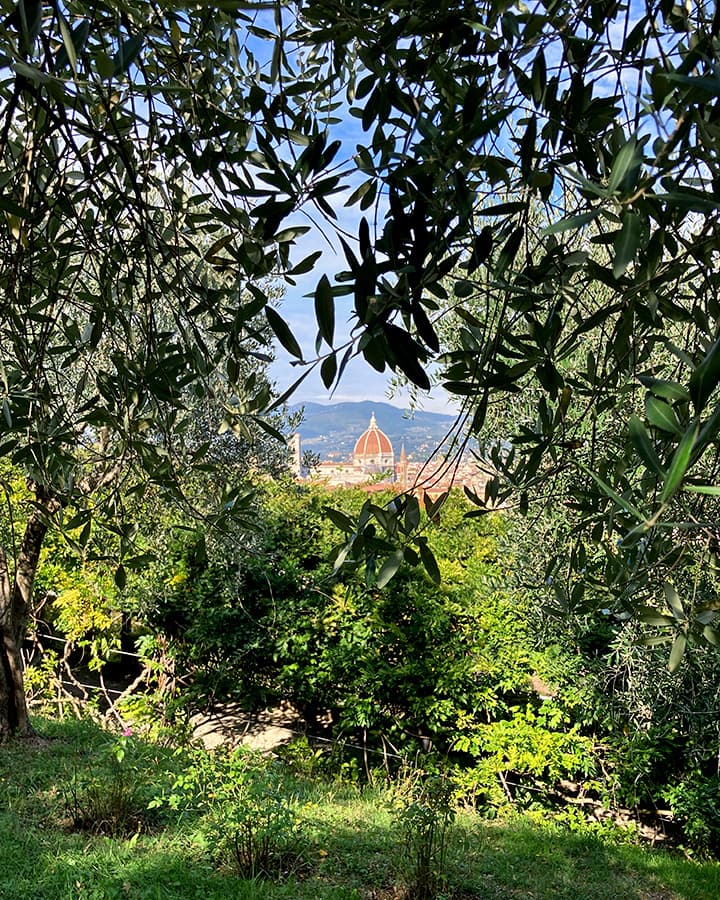 My eyes jumped from the bright green grass beneath my feet, the lone chestnut tree waving its golden leaves, and the wisteria vines flitting in the wind.

As soon as I spotted the Duomo in the distance, I paused. My heart raced at this occhiolino dal Duomo. It felt like the cathedral was winking at me through the gardens bounty.

That brief sighting of the Duomo reminded me that Mother Nature inspires all beautynatural and man-made. She infuses us with her energy into us so that we may create beauty in our way and share it with others.

After seeing the long line at the Giardino di Boboli this afternoon, I continued down via Maggio toward Porta Romana. The sun blazed high above the winding road lined with shops, warming up the chilly air. When I arrived in front of the Giardino delle Scuderie Reali, I entered through its large gate. Crispy, golden leaves covered the grass and dirt paths near the Linden, London plane, and chestnut trees. Couples lounged on the lawn, enjoying their lunches, while children played on the playground. 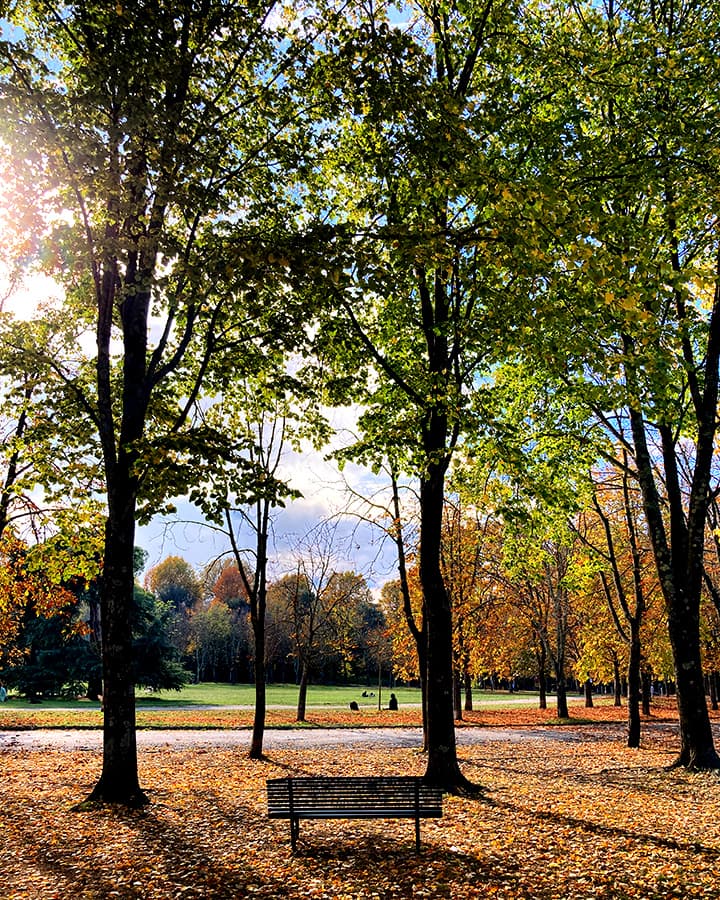 I exited the Garden of the Royal Stables and headed up Viale Machiavelli. Yellow and rust-colored leaves crunched under my feet along the pavement. Wrought iron fences enclosed pastel villas lining the street like Monopoly pieces. When I heard a parrot singing, I stopped to figure out where it was. I smiled when I saw its lime green body perched on a branch.

Only a handful of people passed me on my trek up the stone sidewalk to Piazzale Michelangiolo. Just as a red double-decker tour bus zoomed down the tree-lined avenue, I looked away from it and saw the golden sphere atop the Duomo.

When I reached my favorite spot along Viale Galileo, I descended the gravel path. Four teenagers stood around a bench at the other end of the area while I remained near the lamppost. For the first time, I sat down on the slanting barrier alongside the steps and crossed my arms. 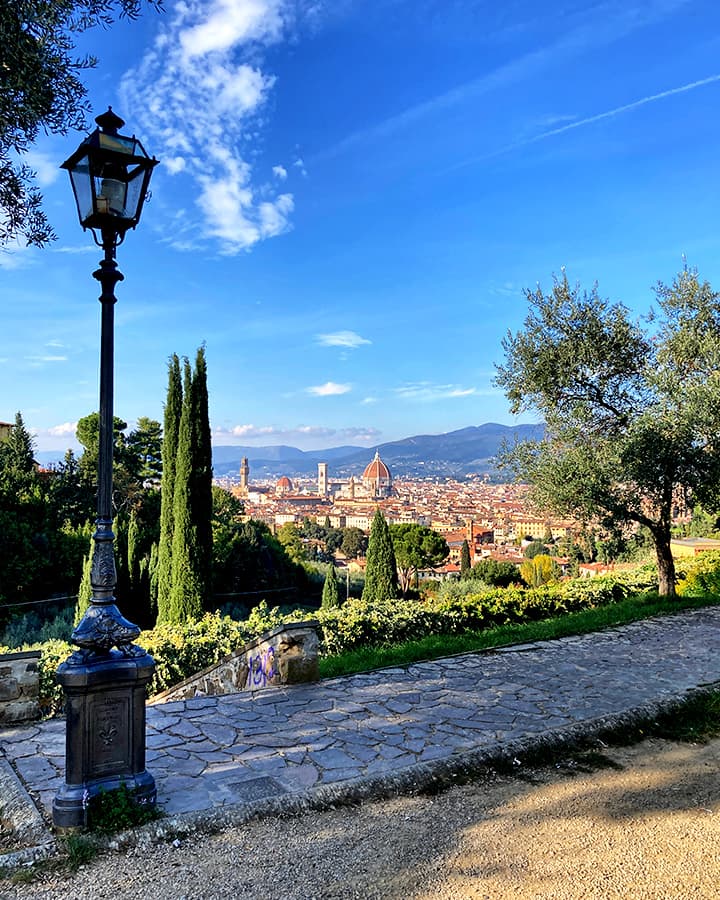 The scent of tall grass and crushed olives wafted through the air. The sunlight gently swept across the sky, casting its golden rays onto Florence. With my eyes on the Duomo behind the valley of olive and cypress trees, I relaxed my shoulders and exhaled.

I contemplated the view until San Miniato al Montes bells chimed twice. Strolling up the mosaic stone path to return to the sidewalk, I gazed at the cityscape. The rush of cars passing by in both directions surprised me. I looked back and took in a deep breath.

I took this photo on Sunday, October 31st. It wasnt until later in the day that I realized the significance of my jaunt to contemplate Florence. On that day in 1737, Anna Maria Luisa de Medici signed the patto di famiglia. Without her astute mind and deep love of Florence, this city would not be what it is today. All of her familys treasures would have been dispersed throughout the world like many previous dynasties.

She conserved not only the entirety of Florences masterpieces but also placed them into the hands of the Florentines to take care of and to share with those who travel here.