The city quieted down after the festivities. People wandered through the streets and piazzas at a slower pace. The wintry, yet unpredictable, weather accompanied me as I ambled around Florence to commune with her. From walking up to San Miniato al Monte, watching the sunset above the Arno, basking in the full moon above the Duomo, admiring the foggy view near Ponte alle Grazie, glimpsing the cupola from Piazza Santissima Annunziata, and reveling in the blue hour from Ponte Santa Trinita.

After the morning rain subsided, I rushed outside. The gray clouds blanketing the sky announced more wet weather, but I took my chances. The chilly air whipped past me as I crossed Ponte alle Grazie. I headed toward San Niccolò where restaurants were preparing their terraces for the lunch customers, and a small crowd gathered at the corner café.

Wandering up the incline, the church bells echoed along the narrow street. I ducked inside the Giardino delle Rose and inhaled deeply when I reached the gardens. Bright green moss poked out between the jagged stones, imbuing the path with hope.

The rose bushes flaunted dainty rosebuds surrounded by fall-colored leaves on thorny branches. I tiptoed around the tiny daisies sprouting through the grass to sniff the few remaining blossoms. The scent of damp soil overpowered the faint smell of the roses.

Something nudged me to view Florence from above so I could hug her with my gaze, so I exited the gardens. The sun seeped through the clouds and set the sky aglow when I reached Piazzale Michelangiolo. I meandered down Viale Galileo away from the crowds.

I sped up the moment I spotted San Miniato al Monte framed by two leafless London plane trees. With each step up the wide marble staircase, a wave of appreciation rippled through me.

The terrace in front of the basilica was lined with tourists. People snapped photos while listening to their tour guide. Instead of continuing up, I turned around. Leaning my hip against the stone wall, I took in a deep breath. A hint of rain-drenched pavement encircled me. After a few minutes, the sun pierced the clouds, evaporating them with her light. When a snippet of pale blue sky appeared above the Duomo, I sighed. My heart swung open to welcome Florence just like this sacred gate.

Every other lamppost on the brick wall was lit as I strolled down Lungarno degli Acciaiuoli. People sat at sidewalk tables under heat lamps to carouse and watch the goings-on. Gray clouds slithered across the sky above a somber city where few had ventured to walk along the river. I smiled at the ribbon of yellow and orange lingered above the hills in the distance. 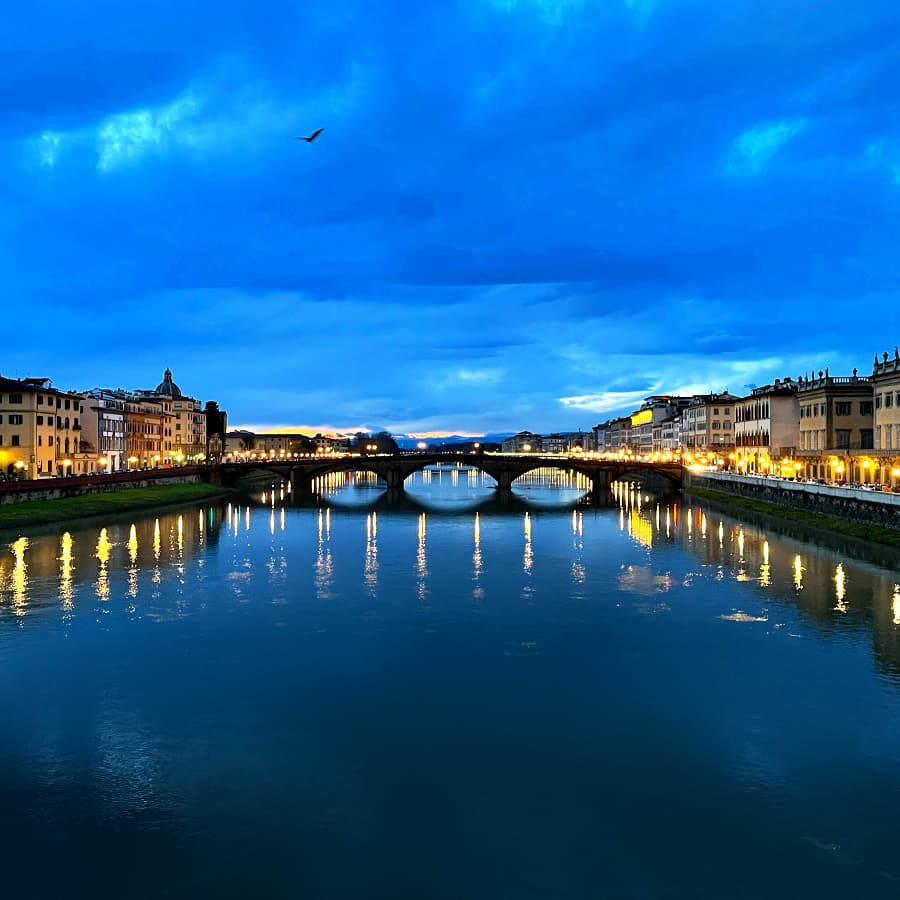 Cold gusts of wind left ripples on the shimmering water and tossed my hair about. Pedestrians shuffled behind me, keeping their heads nestled in their scarves and their hands shoved deep in their pockets.

Even though the temperature was dropping fast, I remained in place. I was waiting for the sky and the river to embrace Florence during the blue hour. I closed my eyes to revel in this moment above the river. To smell the crisp air, to feel the wind caress my face, to hear the cars traverse the stone road, and to rest my fingertips on the limestone block. When I opened them up again, the streetlights along the Arno and over Ponte alla Carraia enlivened the entire riverscape.

Two herons followed each other toward Ponte Vecchio while another one skimmed the waters surface. A large group of seagulls--only distinguishable by their dark shapes--flew away from the sun as if following the other birds.

On my walk home, I paused along Lungarno Anna Maria Luisa de Medici in between two couples. We all faced the Ponte Vecchio to watch the holiday illuminations. When the five oclock bells rang, I quieted my breath to hear their sweet melody reverberate off the buildings.

As more people arrived, I left my spot to wander through the Piazzale degli Uffizi. I focused on the cupola, peeking above the palazzi in Piazza della Signoria, before turning down via della Ninna.

As the shops were closing for the day, people were withdrawing from the centro storico. The deserted streets surprised me after large groups of friends and families swarmed the streets in the afternoon. The mood of those meandering through the city center was that of leaving a party: slow pace, long faces, and weary bodies. The excitement of the weekend disappeared as the new week was about to begin. 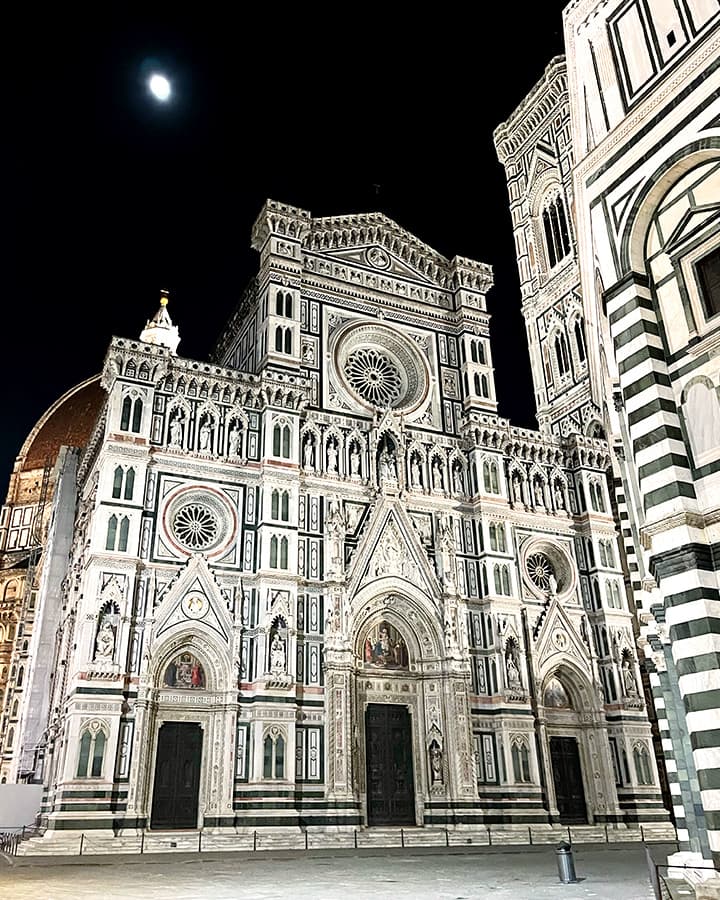 After strolling through Piazza della Signoria, I headed down via Calzaiuoli where colorful signs announcing the annual sales were plastered in the windows of unlit shops. Holiday lights continued to flicker along the side streets.

When I reached Piazza San Giovanni, I circled the Battistero to stand in front of the cement benches toward the back near via Roma. The full moon glowed above the Campanile di Giotto in the pitch black sky.

Bicyclists lugging yellow and light blue food delivery backpacks sped by, ringing their bells. One zipped behind me as my head was tilted up and created a gust of wind that pushed my scarf forward.

A handful of people quietly sat on restaurant terraces. Three young women took selfies in front of the Duomo next to me. The chill of the wintry air seeped into my clothes. To keep warm, I shifted my weight from one leg to the other.

I walked to the other side of the Battistero where the moon gleamed above the cupola. When I noticed no one was passing by, I opened my iPhone to take a photo. In rapid succession, I gleefully tapped my index finger on the screen. When a couple with their Labrador retriever passed in front of the church steps, I stopped.

I soaked up the moons rays as more people flowed in and out of the piazza. When a hush came over the city, I too retreated home.

As I opened my shutters this morning, excitement fluttered in my chest. My eyes welcomed the fog that had descended over Florence during the night. It was so peaceful except for a tiny sparrow chirping on the roof of a neighboring building. 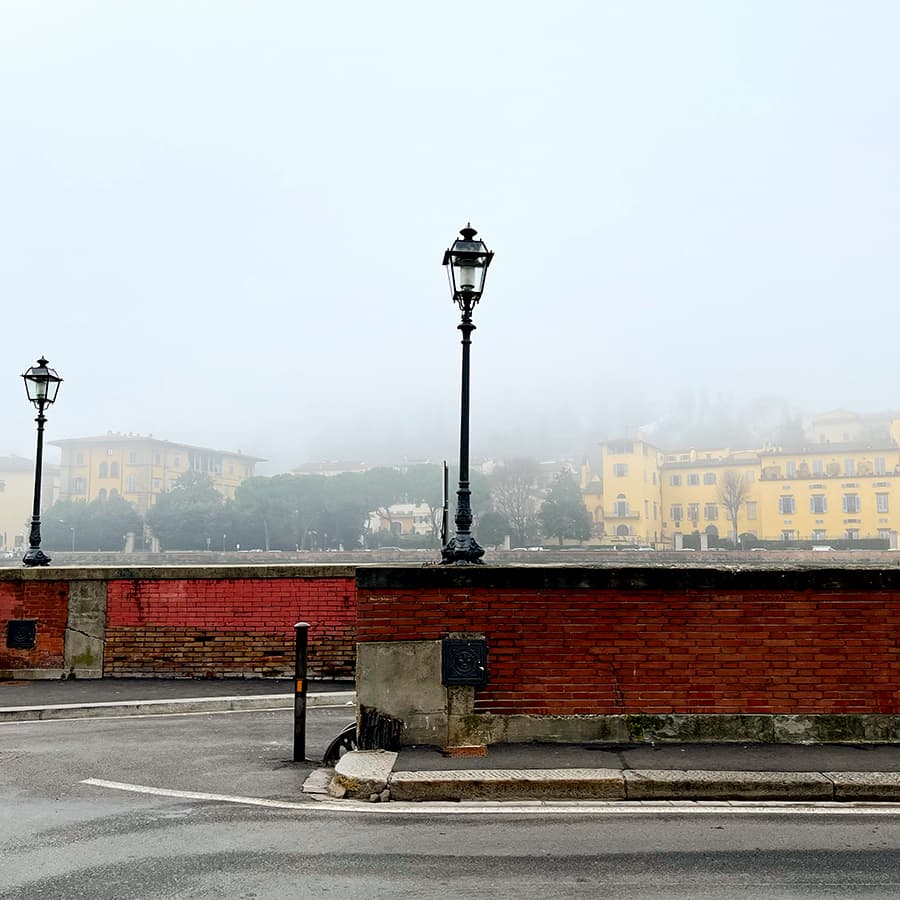 I rushed outside to navigate the foggy city. I love watching it descend after dusk, but I prefer seeing it dissolve in the morning.

Before reaching the Arno, I paused on the corner to admire the riverscape. I peered over the red brick wall after a motorino zipped by with the drivers yellow scarf flailing behind her.

A cool mist gathered on my face after it breezed through my hair. I walked to Ponte alle Grazie and stood in the middle. Stretching my shoulders back, I faced west and scanned the vista. A faint haze shrouded the rooftops of the pastel buildings as the sun was rising. My eyes examined the Palazzo Vecchio because the top of the Torre di Arnolfo was hidden. 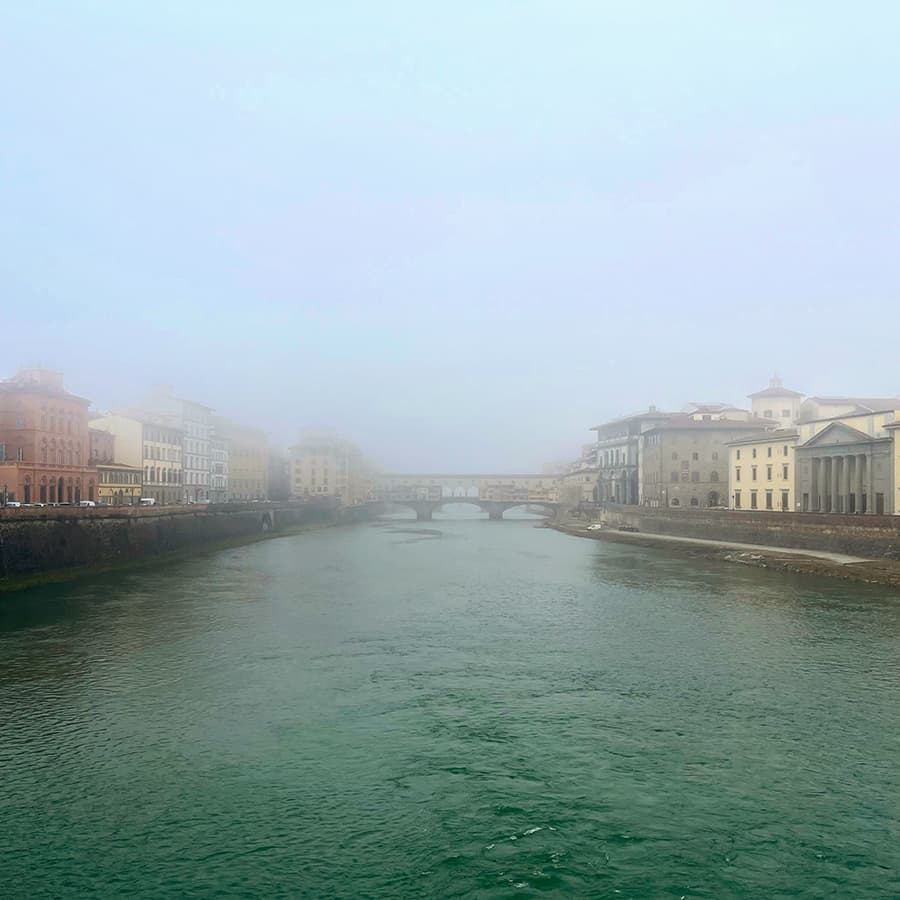 The sound of the river flowing over the weir relaxed my body. I breathed in the crisp air that smelled of mountains and rainwater. The dreamy color of the opaque water with its white caps infused me with a soothing yet powerful energy.

A couple leaned against the railing a few meters from me. The sunlight grazed their smiling faces as they smiled with the Ponte Vecchio behind them.

I kept my eyes on the sun as I continued across the bridge to San Niccolò. It diffused its golden light and evaporated the fog to expose snippets of pale blue sky. My heart expanded as I celebrated the new day being unveiled minute by minute.

As I passed in between the Battistero and the Duomo, I tilted my head back to delight in the cathedrals marble façade. I considered visiting it since only about ten people stood in line, but continued walking toward via dei Martelli. When I came to the end of the steps, I circled behind the Duomo. 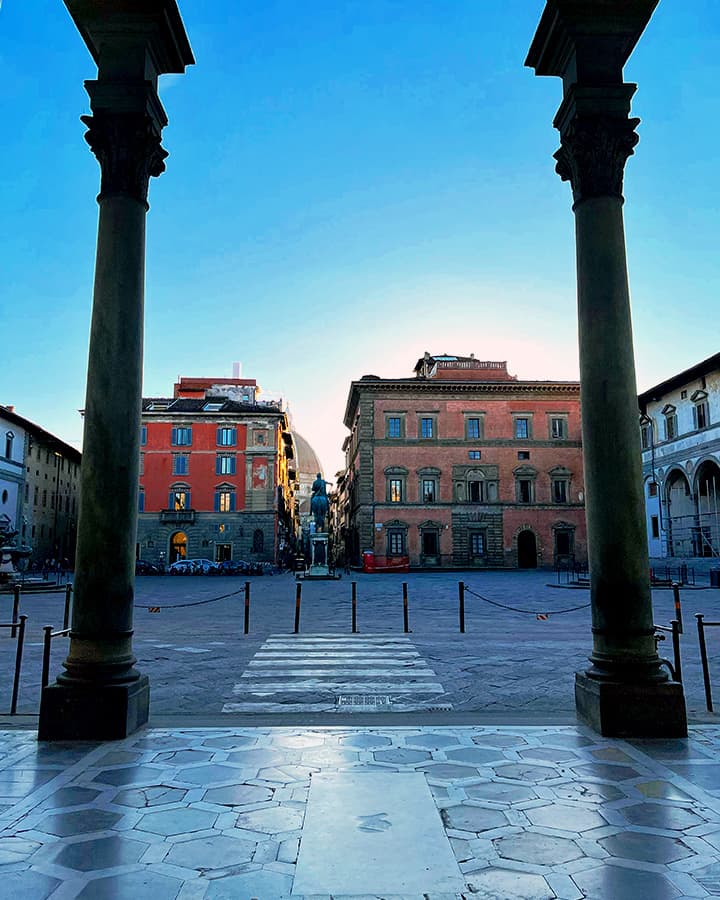 At via dei Servi, I turned left. Some shops were opening after their lunch break while restaurants were preparing to close. I peeked into storefront windows along the one-way street without stopping.

Before I knew it, I had arrived at Piazza Santissima Annunziata. I paused in front of Ferdinando I de Medici and smiled. I walked to the back of the bronze and stood between the Fontane dei mostri marini. Water from the sea monsters escaped the large seashells and splashed onto the cement. I slowly breathed in the chilly air as I admired the piazza.

I backed up to the piazzas railing and leaned against it. Every few minutes, a bus would rumble over the bumpy road. It either popped out of the archway or disappeared under it.

When I turned around to look at the Santissima Annunziatas portico, a bearded friar opened the basilicas tall wooden doors. I rushed across the road and ducked inside. Upon entering the Cloister of the Vows, the frescoes glowing under the glass ceiling enchanted me. Each one was more stunning than the previous one.

I paused alongside the Annunziata Chapel after stepping inside the basilica. Unlit candles sat atop the barrier and dangled from lanterns. The scent of incense and candle wax hovered in the air. I took my time admiring the chapels as I walked up and down the nave. At one of them, I lit two candles and sat down a moment.

As I headed toward the exit, I passed the same friar, wearing a long black robe. We both glanced at each other and said buonasera before looking away.

Passing through the Cloister of the Vows, I spotted the Duomo just beyond the piazza. The setting sun illuminated it and bestowed upon it a golden haze. To glimpse the cupola from afar is always such a delight.

The wind fluttered on my face as I gazed at the horizon. The billowy clouds traversed the sky en masse above Ponte alla Carraia, creating a colorful crown above San Frediano in Cestello. I watched how the splashes of yellow, orange, and pink contrasted with the darkening skies. As they became bolder, the golden light from the lampposts glistened on the water, infusing me with a celebratory vibe. 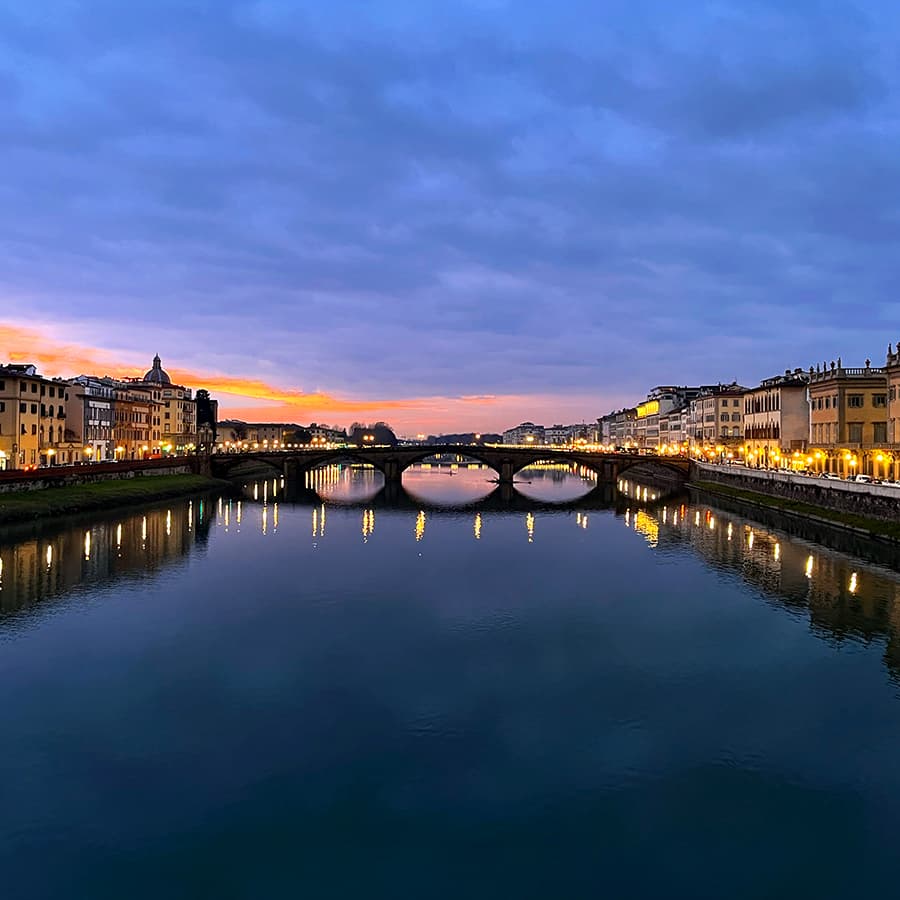 The sunset infused me with so much joy that I hoped everyone would stop to experience it. I looked at the passersby to see their reactions. One group of friends was absorbed in conversation and didnt look at their surroundings. A young couple, walking hand in hand, admired only the Ponte Vecchio. I also marveled at how it glistened between the clouds and the water, both the same shade of blue.

As I turned around to face the horizon, two girls rushed alongside me with their mobile phones at the ready. The glow of their screens illuminated the excitement on their faces as they stood above the bridges stone barrier. They giggled as they compared their photos with each other on their way toward the Oltrarno.

My shoulders relaxed as a canottiere (rower) strode upon the dark surface of the Arno. Ripples of harmony spread across the water as he glided west. I took in long, deep breaths of air wafting up from the meadows. The scent of fertile soil nourished by the elements delighted me.

A few minutes after Santo Spiritos bells chimed, the thrill of the sunset diminished. The sky dimmed, and the wind kicked up. Before leaving my spot on Ponte Santa Trinita, I blew a kiss to the riverscape.