When Florence is abloom, the air is infused with joy. I was drawn to visit Giardino Bardini, Giardino dellIris, and Giardino delle rose. I strolled through multiple times, even more than I wrote about, not wanting to miss any of Mother Natures gifts that come to life. Through intermittent rain, all of nature thrives: trees and bushes sprout new leaves, flowers develop buds, and grass grows taller. When the sun returns, everything reaches up to greet her as robins, blue tits, and blackbirds sing from the cypresses.

The rising sun highlighted the peaks of the water flowing over the weir below Ponte alle Grazie. After two days of gray skies and intermittent rain, this morning was a glorious change. 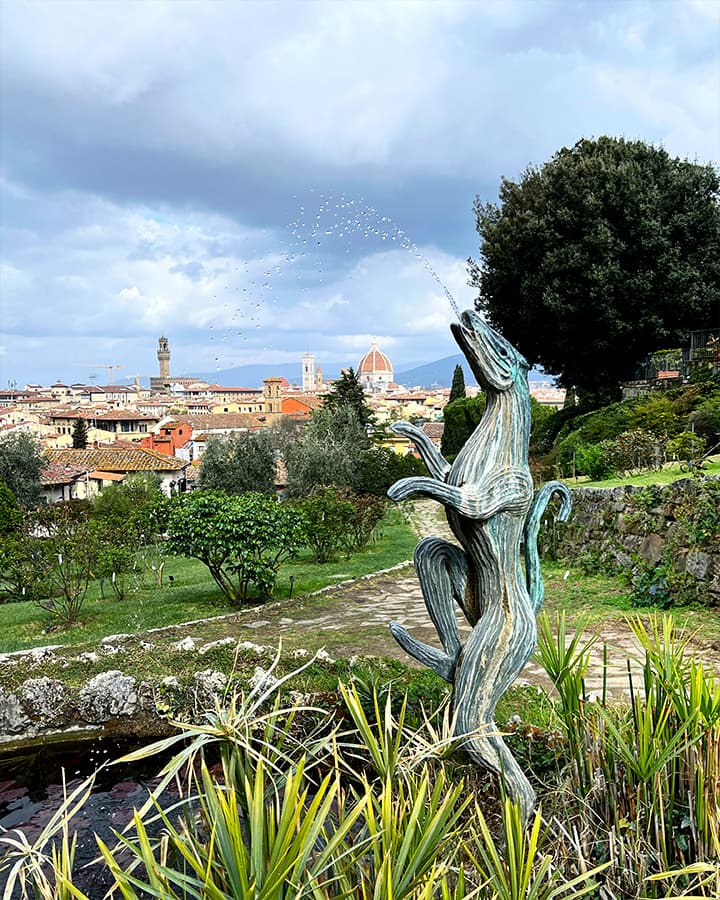 The long, thin clouds revealed the pale blue sky as I strolled through Giardino delle Rose. A blackbird twitched its tail as it poked its orange beak into the grass. Before flying off, it wiggled the worm out of the earth. Two pigeons wobbled along the stone path away from me while a group of crows cawed as they flew overhead.

The soft melody of the water cascading into the pond filled with lily pads enhanced the view of the Duomo.

I circled the leafy rosebushes in search of rosebuds. The green and burgundy leaves unveiled nothing but thorns. A lilac-colored butterfly the size of a quarter flopped above one rosebush and then another, infusing the lush garden with delight.

Voices entered and exited the gardens while birds chattered from the unruly cypress trees along the scalinata. The sun played hide and seek behind the slow-moving clouds.

On my way to the upper garden, my feet sank into the pebbles, forcing me to slow down. Before continuing up to the top, I stood at the fountain where wisteria bushes had blossomed. The light purple blossoms emanated their sweet perfume while water dribbled into the pond where orange fish swam.

After passing a peony bush and hiking up the steps, I navigated the rosebushes near the olive trees and found a handful of rosebuds. I walked past the Judas tree to check up on the wild irises. Some were in full bloom and some were preparing to open up.

As the wind escorted some wispy clouds north, it ushered in darker ones that hinted that rain would soon follow.

After entering the villas tall wooden doors, I navigated Giardino Bardini to see what delights spring has graced us with. Along the incline, tiny buds had sprouted atop the branches of the rose bushes. The fruit orchard welcomed daffodils, buttercups, dandelions, and daisies around the fruit trees. Each treepear, apple, and peachdistinguished itself with its white or pink blossoms. 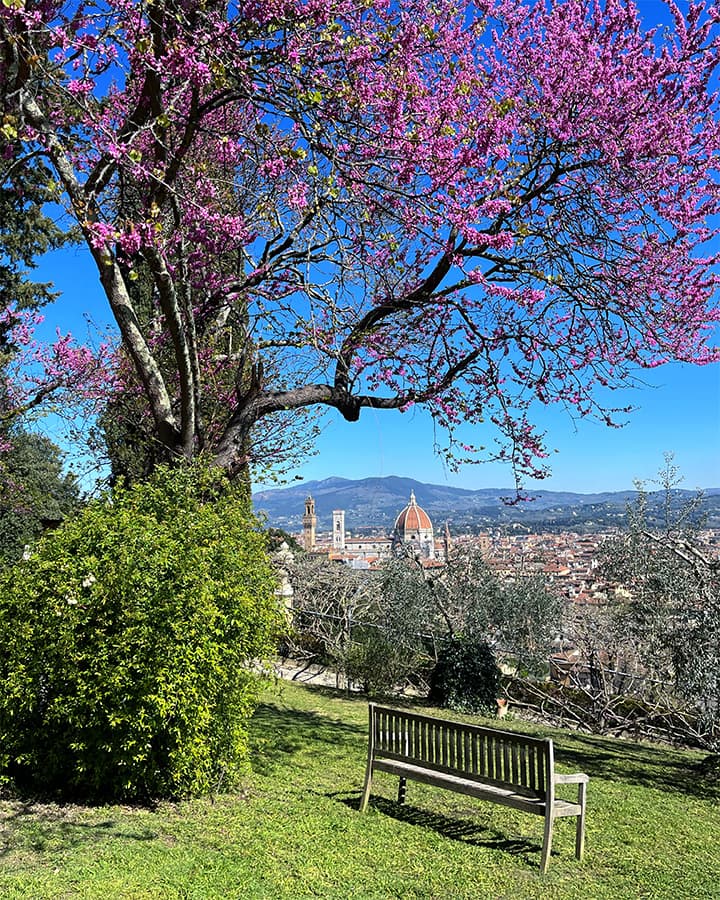 Behind the coffee house, camelia bushes were abloom with pink, red, and white flowers. Some reaching high to bask in the sun while others weighed down the branches that they touched the ground. Petals were scattered at the foot of each bush like confetti.

After my stroll, I sat on a wooden bench under a Judas tree with its vibrant pink blossoms. The sun shined above me and warmed up the light breeze. I listened intently to the church bells from different areas of Florence ringing, people talking as they navigated around the gardens, and birds hidden inside tall cypress trees chattering. The sun sketched shadows of the trees twisted branches on the freshly cut grass whose scent infused me with joy.

The Duomo stood behind the pergola where wisteria was beginning to bloom. Where the sun shines the most, there are blossoms. The dark green surface of Monte Morello in the distance emphasized the cathedrals white marble and its faded terracotta cupola.

As people arrived in the olive orchard, I made my way back down the dirt paths to the exit. Every few steps, I glanced at the view of Florence while admiring the vivacious trees, bushes, and flowers surrounding me.

The last place I expected to visit today was the Giardino dellIris. As I was walking up the incline of the Fontane delle Rampe del Poggi, I spotted a pamphlet about the gardens on the pavement. Instead of going to the Giardino delle Rose, I headed up to Piazzale Michelangiolo. I rushed past the tourists, admiring the panorama, to see if the gardens were open. I thought they werent opening until May 2. When I reached the gate, I took in a deep breath and descended the steps. A woman greeted me and handed me the same leaflet. 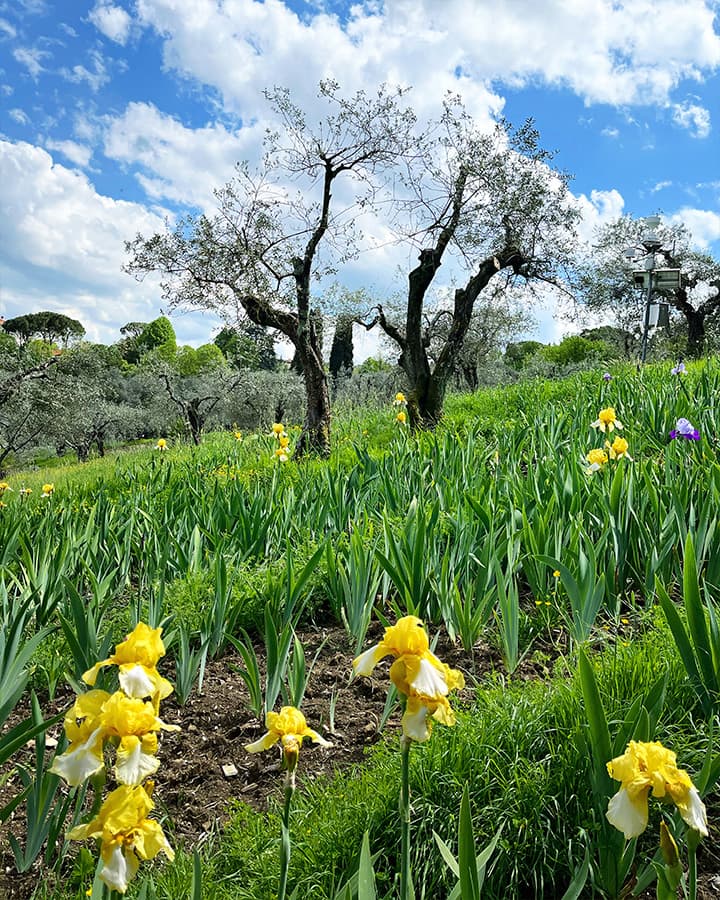 Bold rays of light illuminated the garden as the wind nudged the fluffy clouds out of the suns path. The air was infused with the delicious aromas of spring: green grass, flowers, and fertile soil. I meandered along the brittle stone paths to appreciate the multicolored irises in the olive grove. A few were in full bloom while most of them were waiting their turn. I dipped my nose into many of them, cherishing each ones unique perfume. Butterflies flopped over the blossoms while bees dove inside to taste their nectar.

Visitors, speaking a variety of different languages, roamed around the garden. Some relaxed around the pond in the shade while others paused on benches near the grass.

I sat down under a tiglio (linden tree), where I had a clear view of Fiesole. With the constant hum of the city streets in the background, I tuned in to the melodies the blackbirds sang. The tiglio whispered in my ear as refreshing puffs of wind passed through its branches and rustled its leaves.

Upon reaching the exit a second time, I paused. Without wanting to leave, I headed down another path so I could remain in Mother Natures embrace a little longer.

After I circulated the gardens, I paused once again. Before I ascended the steps, I said arrivederci. We will see each other again.

As I crossed Ponte alle Grazie, I listened to the opaque water from the eastern mountains rush over the weir. Their hypnotic sound encouraged me to slow down. 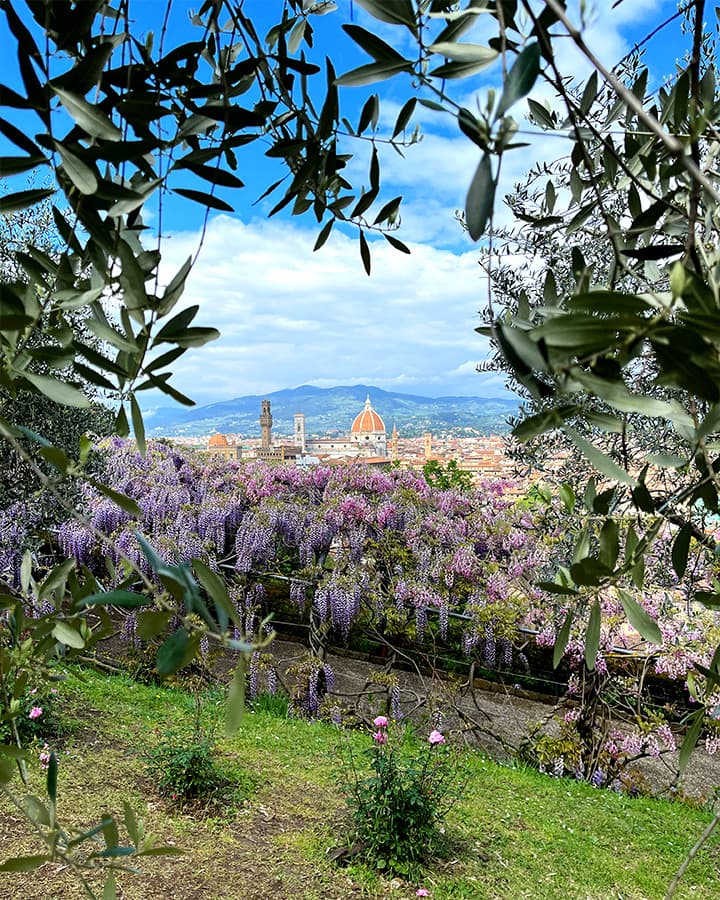 A handful of people stood on the uneven sidewalk waiting to enter Giardino Bardini. With great élan, I rushed inside the building, up the stairs, and out to the garden. I inhaled as soon as I stepped foot on the gravel. As I hiked up the incline, I slowed down and deepened my breaths. The fresh scent of the tiglio (linden) trees rippled through the gentle breeze caressing my face.

Now that the glicine (wisteria) has blossomed, people have flocked to savor these precious blossoms. For the last week, I took a peek at them while I was walking along Lungarno Diaz.

Tiny buds graced the tops of the rose bushes on my right. I peered over my shoulder to glimpse the Duomo and revel in its splendor. As soon as I rounded the corner under a towering oak tree, my eyes zoomed in on the purple and pink blossoms dangling from the branches strewn across the pergola. The glicines sweet perfume infused my heart with a sense of lightness and serenity.

People posed for photos with the glicine as buzzing bees dove into the buds. I stopped every so often to immerse my senses in such ephemeral beauty. After making my way past the many visitors, I headed for the olive grove.

White and light gray clouds gravitated east as if Fiesole, perched between two hills, was calling them forth. Patches of blue sky appeared and then disappeared. When the sun pierced through, it warmed up the air almost instantaneously.

I meandered through the olive trees and admired the roses on the dainty rose bushes. The music playing at the coffeehouse, where people enjoyed drinks and snacks, fluttered through the gardens.

Before I took off, I sat on a wooden bench next to the villa. When couples and families arrived on the terrace, they photographed themselves with the Duomo in the background, radiating its love.