The shorter days inspired me to wake up when the skies were still dark. I wanted to have the time to stroll around town and visit the gardens. In the early afternoons, I could watch the sunset and even catch the blue hour. My favorite moments always happen spontaneously. Every time I head in one direction, I'm always guided to a scene that captivates me.

My entire body relaxed as I stepped out of the villa and onto Giardino Bardinis gravel path. The pebbles crunched under my feet and forced me to slow down. I reveled in Mother Natures welcoming scent. When I rounded the corner, I kicked up the dried leaves gathered along the edges of the walkway. 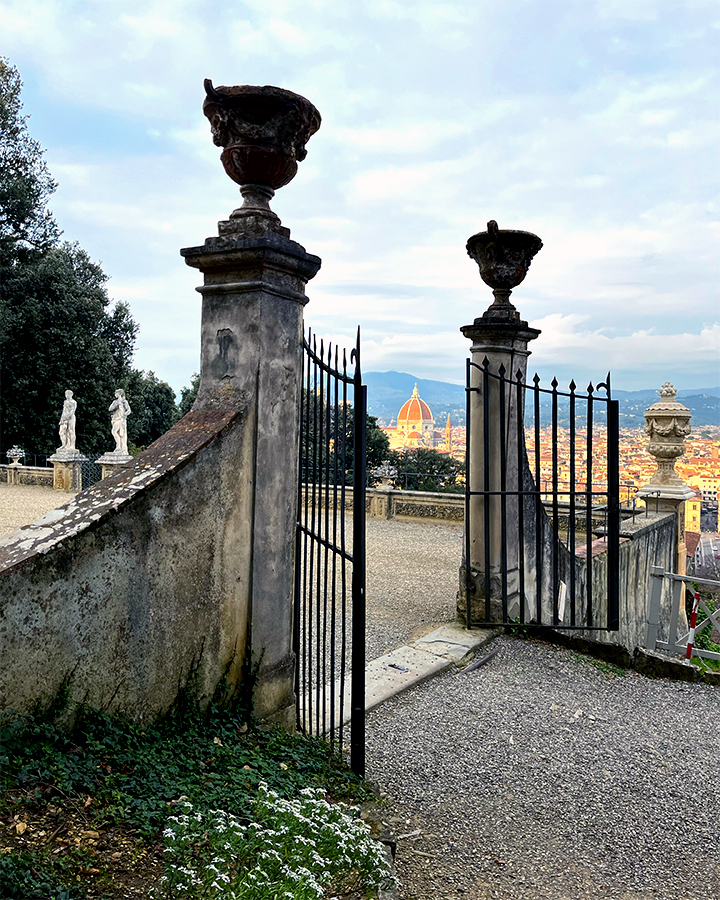 The bright green grass on both sides of the stone steps surprised me. The brisk air I encountered crossing Ponte alle Grazie felt milder as I walked amid the tall trees and luxuriant bushes.

A few birds chirped from inside the trees, interrupting the hum of traffic along Lungarno della Zecca Vecchia. After looking at the city on my right, I tilted my head up to gaze at the wisterias long brown pods hanging down from the yellow leaves intertwined around the pergola.

When I reached the terrace, I sat on a wooden bench and peered at the panorama. Under the billowy gray skies, a layer of fog hovered above the lush area below Fiesole. When a couple paused at the low barrier to cherish the view, the sun peeked through the clouds and cast its golden light onto the city. All the colors of the buildings warmed up while the cupola radiated its love.

I headed to the olive grove for a few moments and delighted in the crisp pink roses in full bloom. I tiptoed through the tall grass where blackish purple olives had fallen. The olive trees were so enchanting that I lost track of time. I rushed to the exit when I heard the announcement regarding the garden closing.

My fingertips skimmed the cool slab of limestone when I reached the middle of Ponte Santa Trinita. I breathed in the final moments of the day. The crisp air swept up from the Arno encircled me, uplifting my spirits. The sun had already dipped behind the skyline, streaking a few clouds with a golden hue. 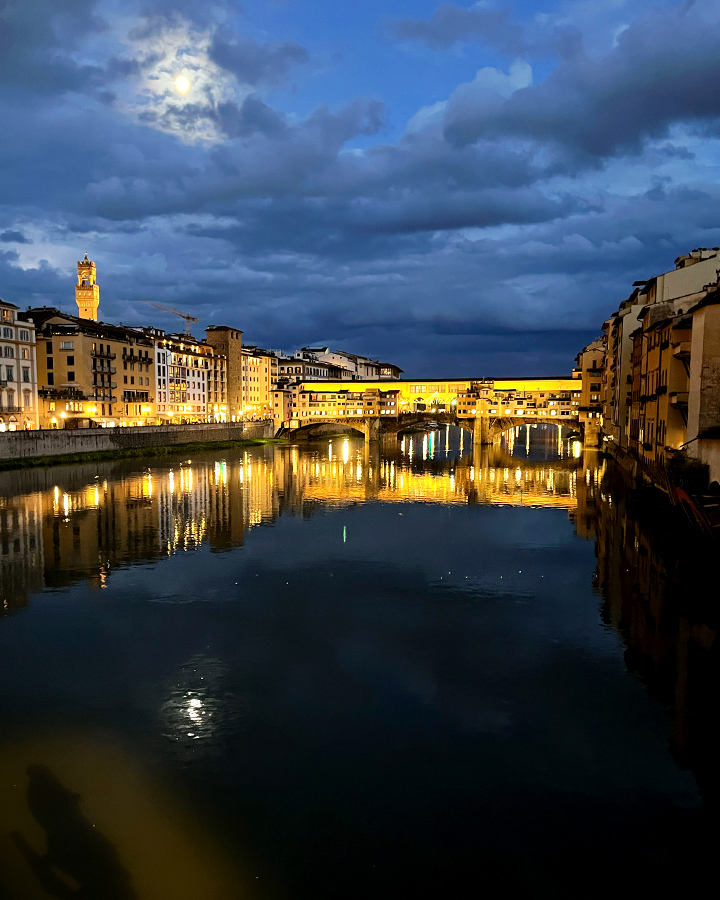 The melodious ripples on the river infused me with tranquility. A white heron passed before my eyes, landing on the opposite riverbank as a flock of starlings spun around overhead to create fascinating formations.

As pink clouds migrated north and the skies grew dim, I headed toward via Maggio instead of walking back to Lungarno degli Acciaiuoli. I cut across the street and centered myself to face the Ponte Vecchio. The golden lights draped above the middle section gave the bridge a festive vibe.

When a light drizzle began, raindrops landed on the rivers surface, disrupting the skys pristine image. From the corner of my eye, I saw the moon peeking through the clouds. I paused again to examine the riverscape where the bridge gleamed under the almost full moon. For me, the most enchanting was the moons reflection and the Winter statues silhouette adorning the waters surface.

Few people were on Ponte Santa Trinita when I arrived. Some were strolling along Lungarno degli Acciaiuoli, while others were walking down Via Tornabuoni amid the unlit Christmas decorations. 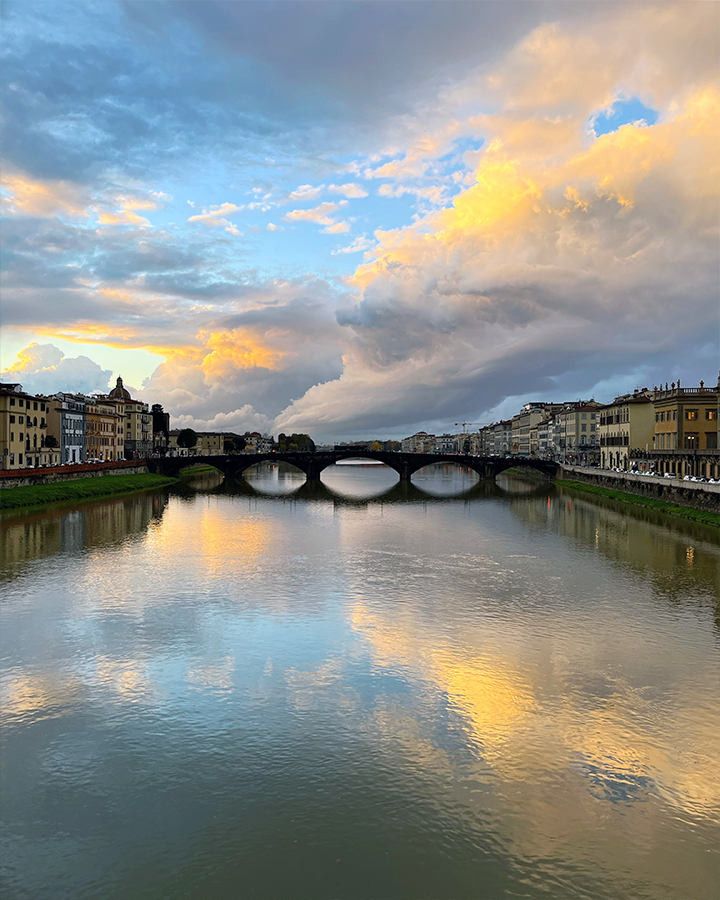 The sun surged through the white clouds and splashed them with gold. I inhaled the brisk air as it made its way over the undulating water.

Facing west, I immersed myself in the riverscape. The patchwork of buildings along the Arno, San Frediano in Cestellos cupola, the curves of Ponte alla Carraia, and the sky reflected on the river embraced me with a sweet sense of serenity. When the skies darkened, the streetlights flickered on.

As I watched the day end, my heart swelled with both gratitude and hope.

The moment I walked out of my apartment, the rain ceased. As I crossed Ponte alle Grazie, I admired the vastness of the gray clouds stretching from the east to west. Everyone I crossed paths with was bundled up in down jackets and long coats with scarves around their necks. Some wore knitted bonnets while others dangled umbrellas from their wrists. 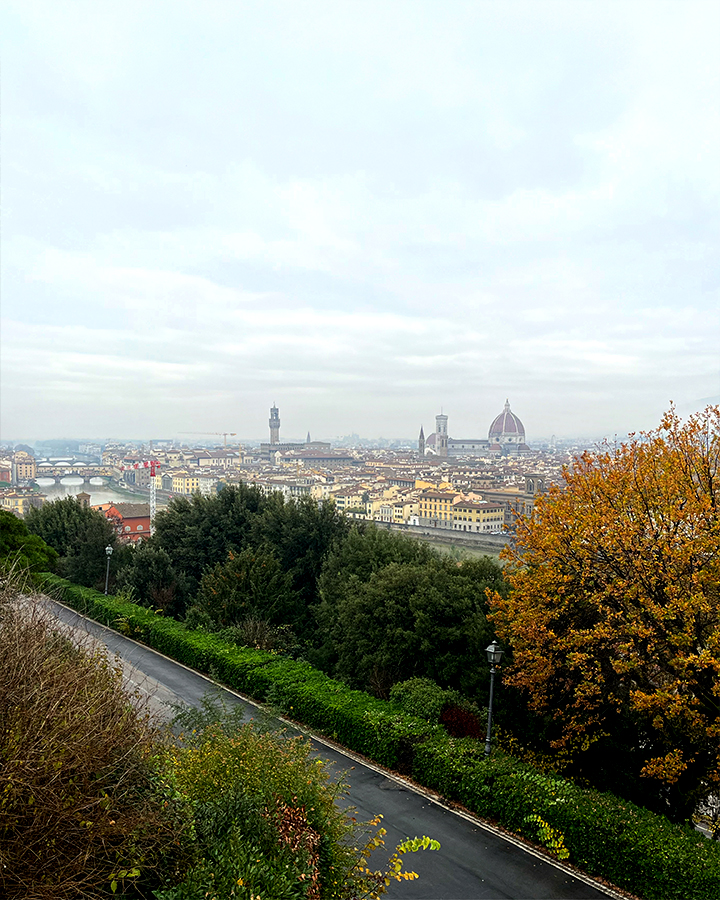 Even though more rain would come, I still walked through San Niccolò to reach the Giardino delle Rose. I reveled in the sound of soggy brown leaves under my feet as I walked up the stone steps. Once I reached the wet grass, my shoulders dropped. I took in a deep breath and enjoyed the sweet scent of the tall grass and muddy soil.

I traipsed around the garden in search of roses. I smiled at the raindrops dangling from the velvety petals and thick branches. When I spotted a vibrant pink rose, which was the last one on the bush, I bent forward to sniff it. Only with my eyes closed was I able to delight in its faint perfume. I was so close that a water drop remained on my nose.

My search for roses led me to the top of the garden. Instead of circling back, I hiked up to Piazzale Michelangiolo. After a small group left to board their bus, I stood along the pale yellow railing and gazed at my beloved city. As my eyes swept the panorama, my heart opened. Florence appeared to be enclosed by fog as if in a snow globe. Nothing else seemed to exist beyond the city limits.

It wasnt until another group arrived that I then walked back down to the Giardino delle Rose. As I looked at the roses before heading home, a misty air caressed my cheeks and a wave of love enveloped me.