Over the past few weeks, I hiked up to Piazzale Michelangiolo, strolled through the Giardino Bardini, visited Palazzo Pitti, caught a brilliant sunset from Lungarno Corsini, and delighted in seeing the moon alongside the Campanile. In my last post, I wrote about how Florence is an open museum, but also an open church. I dont see Florence as a church in the religious sense, but as more of a sanctuary. A place where one finds respite and gains insight. Florences artwork, museums, bridges, gardens, river, and buildings inspire us to be present and see the beauty that is all around us. When we perceive the beauty at the center of every person, place, and thing, then we know love.

The steady stream of cool air whisked me across Ponte alle Grazie last Thursday. I peered above my sunglasses to marvel at the fluffy clouds passing overhead. Whenever I long to see the entire city, I hike up to Piazzale Michelangiolo. Basking in this broader view of Florence instills me with a sense of tranquility.

After walking through San Niccolò, I hiked up the scalinata (stone staircase) next to the Giardino delle Rose. Every time I pass by the garden I hope they have reopened it, but the gates remain closed. I stopped halfway up the wide stone step where the rosebushes peek over the gardens stone wall to admire the view. I always love seeing Florence embraced by nature.

A few moments later, I continued my hike up the scalinata. Immediately after the gardens gate, I noticed long purple wisteria blossoms hanging off the vines. I got on my tippy toes to smell it, but could only catch a whiff.

Instead of heading to Piazzale Michelangiolo, I turned right to walk toward my favorite spot below Viale Galileo. I smiled when I saw two men sitting on separate benches reading. When I reached the stone pathway surrounded by wild grass and olive trees, I took in the view while the sun warmed up my back. The clouds inched along the sky, casting shadows onto the buildings below. At one point, the area surrounding the Duomo was dim, but the sun shined directly on the dome.

As I admired the buildings in Florence spread out and extending up the low hills, I suddenly remembered an exhibit I saw last year at the Uffizi where I discovered Leonardo da Vincis theory that Florence was underwater thousands of years ago. Ever since that exhibit, I see Florences buildings as extensions of the earth emerging from the sea. I wonder if that is why the colors of the buildings are all muted earth tones and the roofs are topped with terracotta tiles.

Thanks to da Vincis theory, I see Florence as a lotus flower, the flower of regeneration. Florences creative energy, which is as fertile today as it always has been, contains the richness of the sea brought to the earth. Its no surprise that Florence holds the space for both creativity and rebirth.

With only one free hour yesterday, I dashed across Ponte alle Grazie to visit Giardino Bardini. I couldnt help but look both ways to admire the views along the river and to smile at the clusters of clouds in the sky. The heat from the sidewalk penetrated the rubber soles of my sneakers. The warm air, wafting up from the pavement and sweeping over me from the sky, relaxed my body from the inside out. 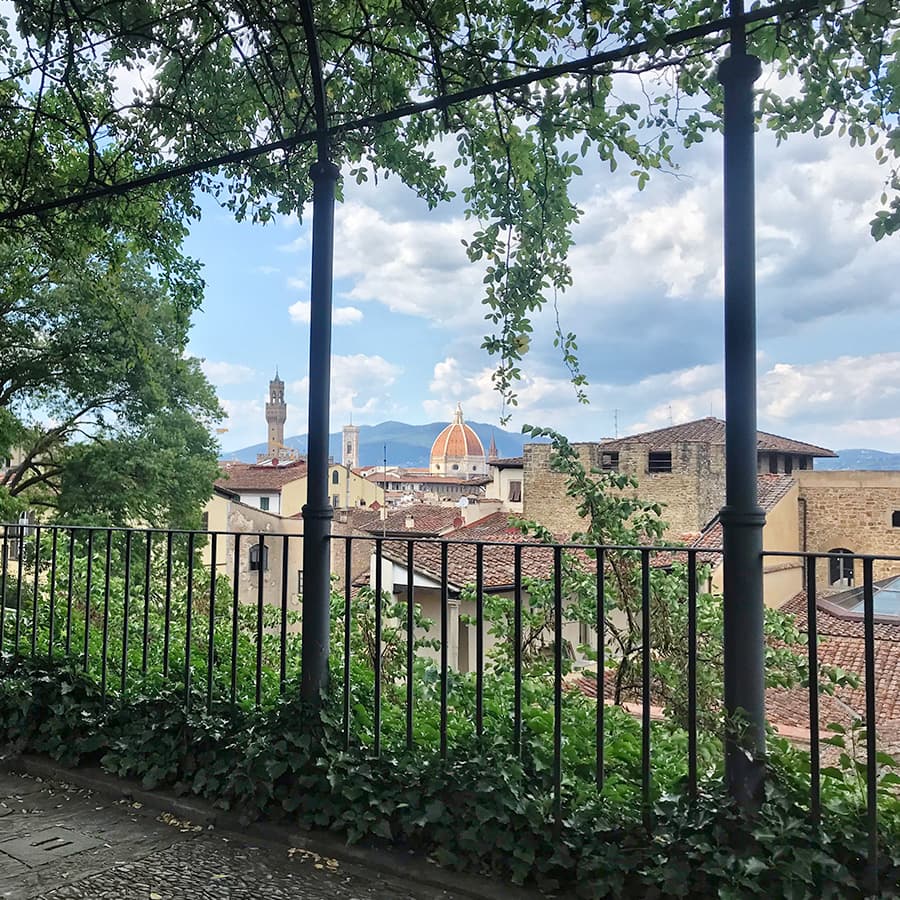 Dried leaves crackled under my feet as I strolled under the rose-covered pergola. I sat down on the red bricks in the cement inlet, the size of a bench, at the end of the pergola. Since last week, the yellow roses have now fallen to the ground.

A puff of warm humid air brought with it the scent of leafy bushes, grass, and fertile soil. While birds were chirping from the trees, I heard a few cicadas chime in every once in a while. I smiled when I looked up at the Duomo, the Campanile, and the Torre dArnolfo perched above the rooftops, framed by rose bushes.

When I return to the same spots, Im able to embrace the changes occurring around me and discover more of the beauty around me.

Before taking off, I wandered up to the top of Giardino Bardini to check out the rosebushes and the olive trees whose leaves were turning yellow. I stumbled over a chestnut nestled at the base of a rosebush when I tried to snap a photo of its single pink rose.

After making my way back down the gravel paths, I exited the garden and stepped onto the sidewalk. Everything looked different, serener and more delightful. I placed my hand on my heart, which was bursting with love, and smiled.

The wide steps welcomed me into Palazzo Pitti. Excitement bubbled up inside of me as I hiked up the staircase with a flow of cool air accompanying me. With each step on the red carpet in the Palatine Gallery, I gazed at the marble statues lined up on both sides of me. Chandeliers hung low from the ceiling, creating a sense of grandeur. 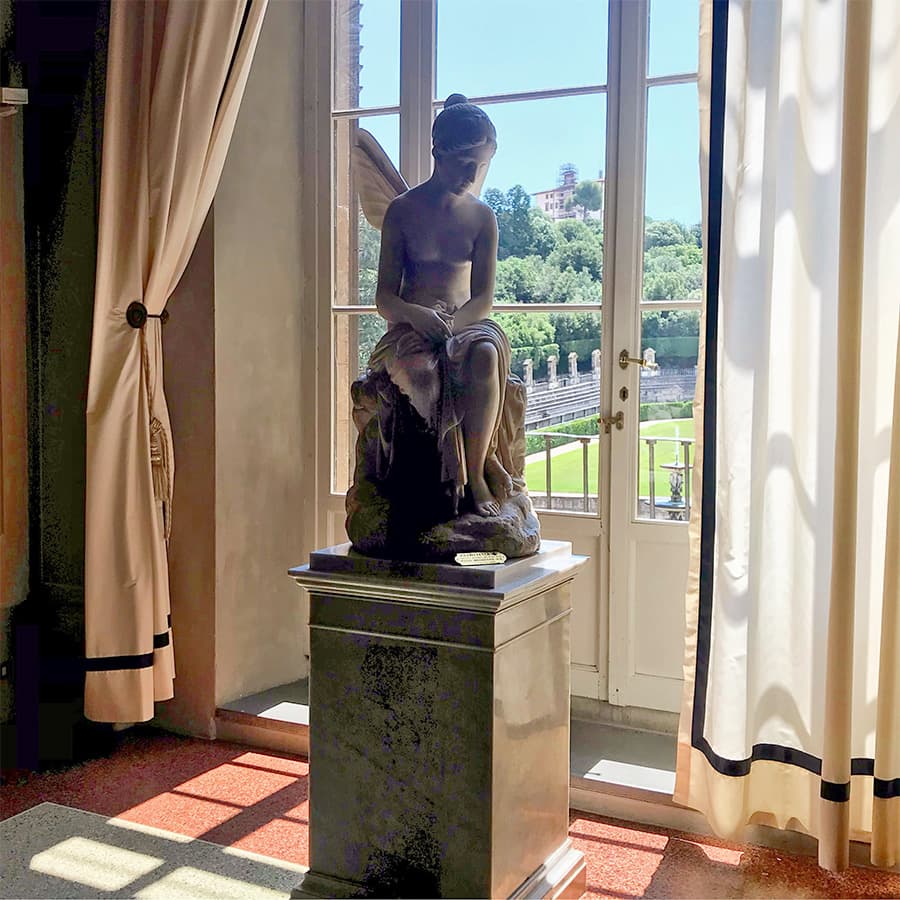 After meandering through the rooms where paintings covered the walls and vibrant frescos adorned the ceilings, I sat down in the Sala dellIliade for a break. A handful of people shuffled around me while I contemplated the details of the artwork and the room itself.

I dont know why my regard hopped between both of Andrea del Sartos depictions of the Assumption of the Virgin (Passerini Assumption and Panciatichi Assumption). Usually, Im more attracted to the portraits of those who once lived in Florence and now continue to exist in the museum.

My heart raced when I realized I was alone in the Sala di Venere. Muffled sounds of the piazza below slipped through an open window. A refreshing breeze caressed my back as I revered Venuss sculpture at the center of her room.

I let out an audible sigh when I entered the Salone Verde. A sensation of tranquility washed over me. The green silk tapestry and the two canvases of women lounging on sofas caused me to slow down my breath.

Inspired to see more artwork, I walked up to the second level to the Galleria dArte Moderna. When I glimpsed the Giardino di Boboli behind the sculpture of Psyche Abandoned, I decided to visit the gardens before returning to the city.

After marveling at the colorful flowers and listening to the parrots chirping from the tall trees, I exited the gates of the garden. Pedestrians rushed past me in one direction while cars whizzed by me in the other on via Romana. On my way toward the Ponte Vecchio, I scanned the massive stones that make up Palazzo Pittis facade and smiled. Florences masterpieces are safely tucked away for others to enjoy and appreciate.

When I headed outside for a walk along the Arno, I didnt think I would capture a photo of tonights sunset. I hadnt taken a photo of the sunset from Ponte Santa Trinita in weeks because the sky was bare in the evenings. The sky was already glowing when I walked along Lungarno degli Acciaioli. I stopped along the stone wall to finish my gelato while I admired the Ponte Vecchio. When the San Jacopo soprArno church bells ringing, I pulled out my phone to record a video of the view. 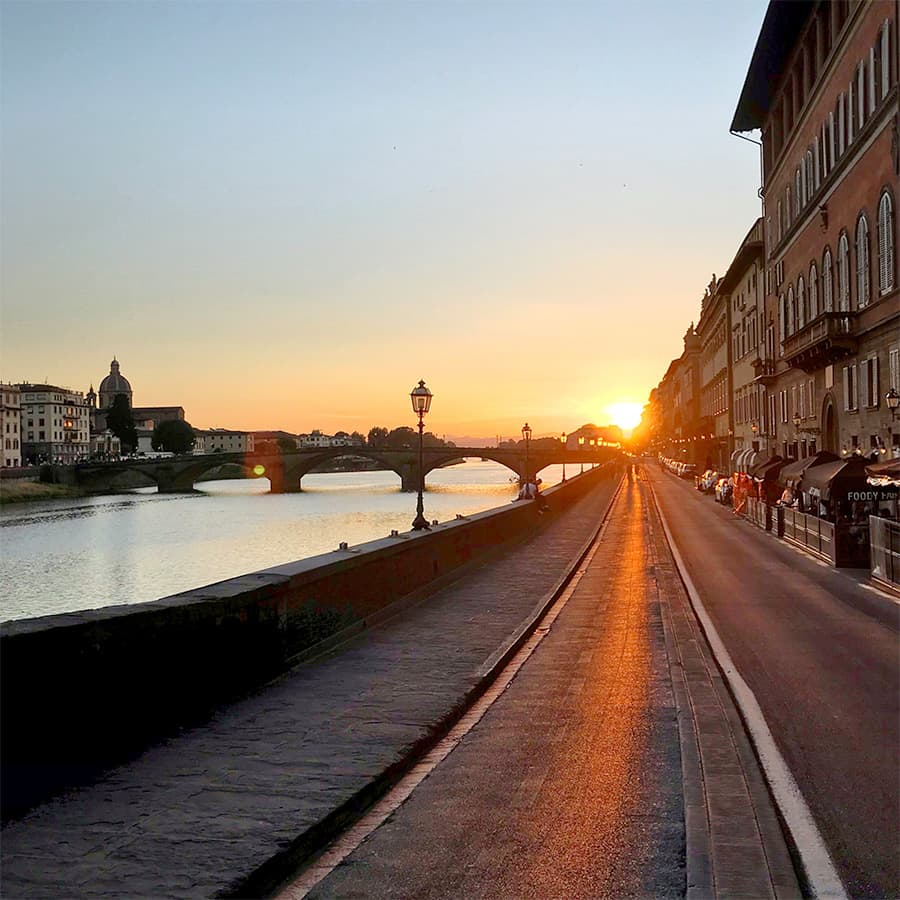 The sound of a street musician singing and playing guitar on the Ponte Vecchio swirled around me as I passed by a terrace whose tables spilled out into the street. Couples and small groups of people were drinking cocktails and eating dinner at candlelit tables. I smile every time I see a new makeshift terrace on the sidewalk around town because of the inviting atmosphere they create.

Before I even reached the Ponte Santa Trinita, the large orange glow of the sun stretched toward me down Lungarno Corsini. I dashed across the street and stood on the cement barrier between the bicycle lane and the street to snap a photo.

My plan this evening was to take advantage of the cooler air passing through the city above the Arno. At first, I thought catching the church bells ringing was my treat for the day and then I caught sight of the sunset along Lungarno Corsini. Sometimes the most delightful moments are the ones we dont expect.

I was eager to meander through the city center this evening and feel the balmy air sweeping through the streets and piazzas. I first walked down via dei Neri where people had already lined up to order their panini and then zipped through Piazza della Signoria. The shops along via Por Santa Maria were closing as I made my way to the Ponte Vecchio. Standing along the low stone wall, the sun stretched my shadow to the middle of the walkway. A few people stopped for a few moments to take selfies, the wind tossing their hair around their faces. One girl held her skirt down as she rushed across the bridge. 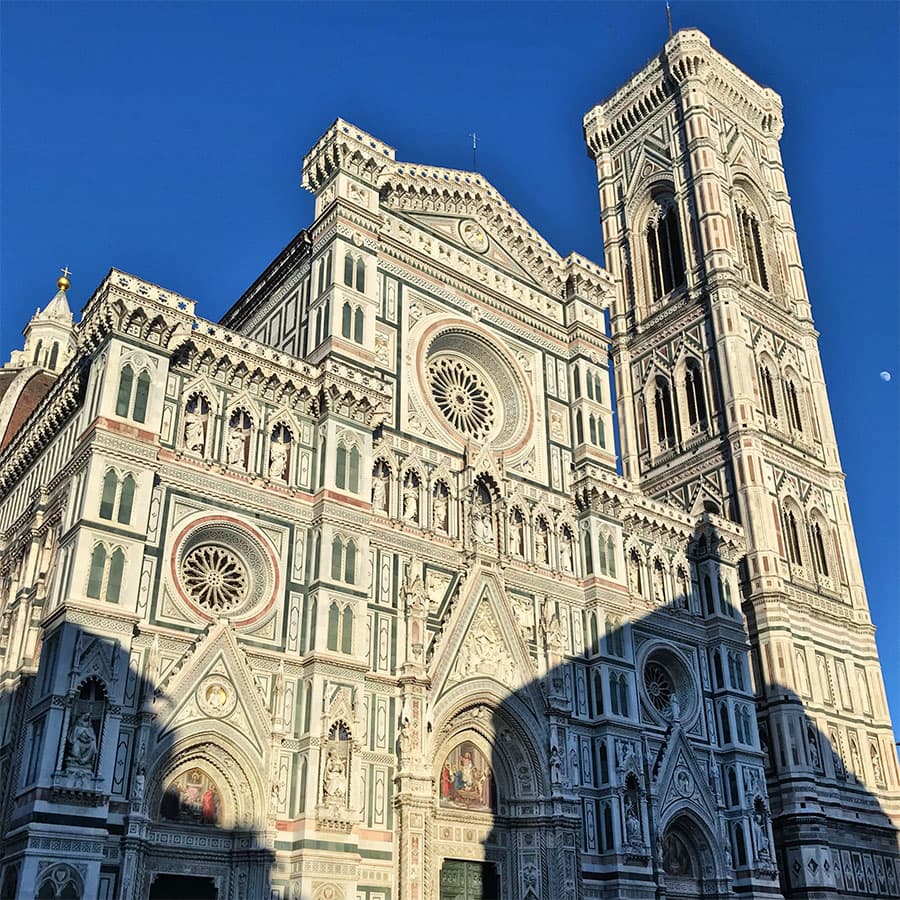 It was too early to watch the sunset, so I meandered toward the center, passing the Mercato del Porcellino and Piazza Repubblica. When I reached Piazza San Giovanni and saw the Duomo lit up by the sun, I stopped. The drumming of a street musician on the other side of the Battistero reverberated throughout the piazza, making it difficult to hear the food delivery bikes ringing their bells. People sat on terraces drinking summer cocktails.

The drummer sat at the corner of via dei Martelli beating his empty plastic barrels placed around him. I stood on the sidewalk across from the north doors of the Battistero and took a photo of the Duomo and Campanile with the faint presence of the moon to its right.

My eyes bounced around the façade, admiring more of its details: the countless marble statues and busts, and the flowerlike marble structures of the cathedrals windows. As the blue sky became bolder and the light on the Duomo became warmer, the shadow of the Battisteros roof staggered along the Duomos façade. The sun highlighted the mosaic lunette of Christ enthroned with Mary and St. John the Baptist above the cathedrals central door.

When the moon kissed the Campanile, I walked to the other side of the Battistero to absorb more of the Duomos beauty. As I headed down via Calzaiuoli with the warm wind caressing my face, I peered up at the Campanile and said goodbye. People often say that Florence is an outdoor museum, but it is also an outdoor church with tabernacles on street corners and the many frescos and statues on the façades of her cathedral and churches.