As I roam around Florence, I enjoy letting my heart lead me in different directions. When a sight appeals to me, I pause for a moment to bask in it. I become as quiet as possible and allow my senses to capture the details of my surroundings. My photos and anecdotes are the keepsakes of these precious moments. However, the most significant souvenirs of these moments are the impressions they leave in my heart.

What I love about writing the anecdotes is being able to share the particularities of a moment of my life in Florence. I believe that my experiences admiring a specific view add another layer to the photo.

While some prefer to search for something out of the ordinary to delight their eyes, I prefer to remain open for beauty to present itself to me. I dont expect to see beauty, but I know that when I look through the eyes of my heart, beauty is everywhere.

Ive stood along Lungarno Vespucci admiring San Frediano in Cestello countless times over the years. Gazing at the churchs dome extending up to the clouds and its reflection reaching down to the water, I leaned on the brick wall, allowing my elbows to rest on it. While heat rose from the cement, spurts of cooler air drifted up from the Arno. The crisp scent of the water tickled my nose.

Its from this exact spot along the low cement wall where I fell in love with sunsets. The ones I cherished the most occurred when a jumble of clouds blanketed the sky, allowing the sun to paint its mood across the sky.

When a canottiere (rower) popped out from under Ponte alla Carraia, I perked up and grabbed my iPhone. I watched him through my phones camera and snapped a photo of him piercing the reflection on the water. My gaze followed him until he stopped just short of the Santa Rosa weir. Even though the sun blazed overhead, I waited for him to pass a second time. Birds flew above the water while cars and bicycles passed by along the street in both directions.

When he began rowing toward me, I prepared myself to take another photo of him. As he passed in front of San Frediano in Cestello, the church bells rang. Instead of taking a photo, I switched my phones camera to take a video. I stopped short of hitting the record button when an ambulances siren howled behind me. I followed the canottiere through my phones camera even though I wasnt recording. As soon as the ambulances siren grew silent, I clicked the record button.

I never look at the time when Im strolling through Florence. Sometimes the bells ring on the hour and sometimes they dont. These bells sounded at 12:31 p.m. Capturing the church bells ringing from one of my favorite spots along the Arno was a special treat for me. I imagined nothing more would occur after I took the first pictures of San Frediano in Cestello. Sometimes I feel as if Florence likes to surprise and delight me. And for that, I am grateful.

All day yesterday, the weather forecast hinted at the possibility of rain. When I saw that they forecasted rain at 10 p.m., I headed outside to watch the sunset. Separate groups of people sat on top of the brick wall along Lungarno Anna Maria Luisa de Medici. One couple left their sandals on the sidewalk, allowing their feet to dangle above the Arno. 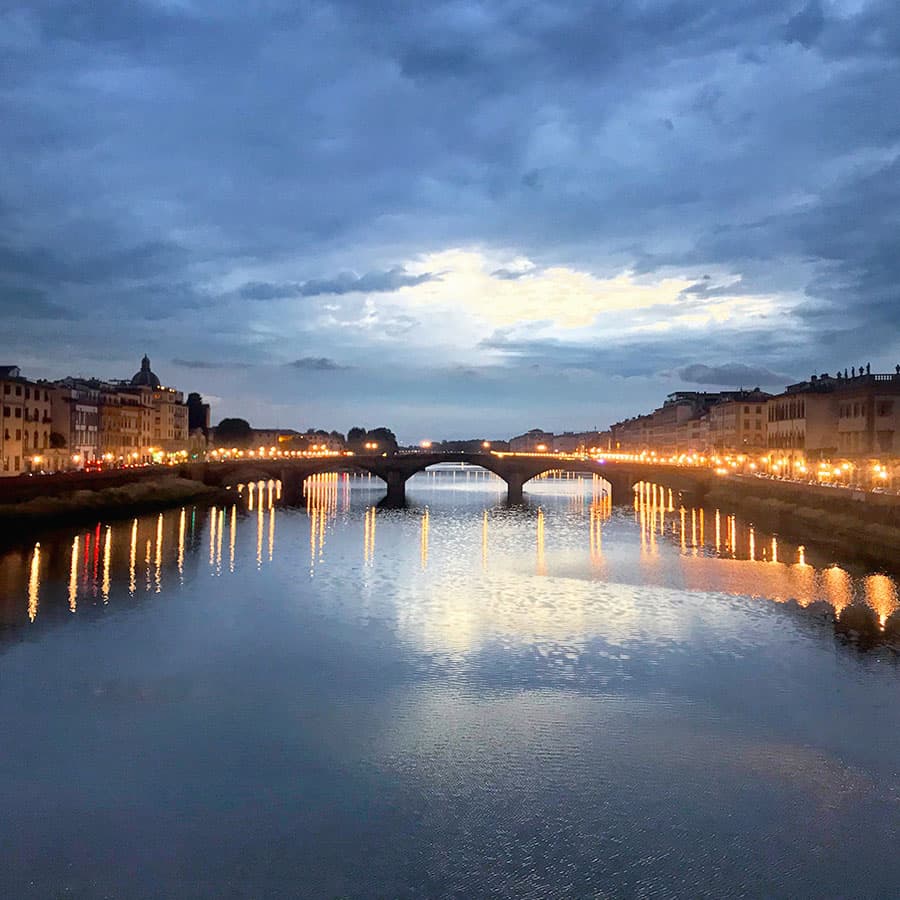 I navigated the uneven stones on the sidewalk and ventured into the street where not a single car passed by me. After passing by Ponte Vecchio, I continued along Lungarno degli Acciaiuoli where a chain-linked fence separated the sidewalk from the street.

Observing the sky to the west, I marched to the middle of Ponte Santa Trinita. When I glanced at the spot where I took the photo of San Frediano in Cestello a few hours earlier, I chuckled. I reminisced about watching a sunset on a cloudy evening, never imagining that I would do just that later.

With each breath, I softened my gaze. The cool air whipping by me instilled me with a delightful sense of serenity. That afternoon, the humidity enveloped me as I strolled along the Arno, hurrying me to find shade.

The sun peeked through two tiny openings in the clouds that reminded me of the eyes of a blackbird. The golden light of the lampposts sparkled while their reflection stretched across the water. My smile widened as the sky turned a deeper blue by the minute. I took consecutive photos, not wanting to miss a single moment. At one point, an oblong section of the sky glowed and shined on the river. The sun was so bright all day but was now too weak to pierce the clouds.

I didnt move when a few raindrops fell on my cheek. Even without an umbrella, I welcomed the rain. When the sky grew dark and the lights fuzzy, I walked home without another drop falling again. It was refreshing all the same with the thick blanket of clouds, buffering us from the sun.

As I stood in Piazza di San Pier Maggiore, I headed up Borgo degli Albizi. With small groups of people meandering through town and bicyclists rushing to arrive at their destination, I took a detour. I passed through one of our few covered passageways in town: Volta di San Pierino. Even in the dim light, I admired the tables prepared for lunch with red napkins held in place by upside down glasses. I wasnt hungry until I smelled the scent of sautéed garlic and onions hanging in the air. One couple perused the menu as the sound of clanging pots from the kitchen softly echoed. 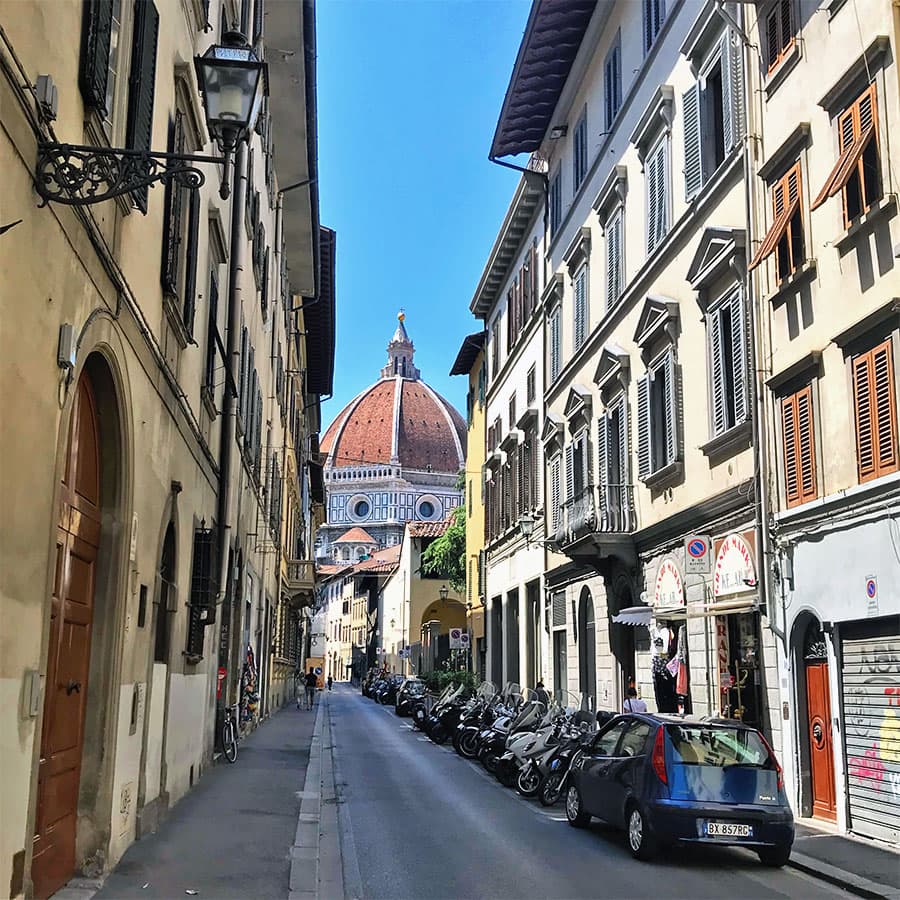 After passing through to the other side, I turned left up via dellOriuolo. My heart jumped in my chest when I saw the Duomo at the end of the street. I reached for my phone to take a photo of the crisp blue sky highlighting the Duomo as the buildings on both sides of the street frame it.

A cool, steady breeze ushered me forward. I couldnt help but keep my eyes on the Duomo and capture photos of it. A few shops kept their glass doors open, but I only glanced inside. When I heard a scooter coming toward me from behind, I stopped and snapped this photo. I ended up taking a few photos along the way whenever the view was clear.

The Duomo almost seems like a mirage when I see it at the end of the street. The modest-looking streets never seem worthy of embracing the Duomo, whose sheer existence is a miracle. The closer I got to it, the quicker my steps were. As I strolled past the two gelaterie (ice cream shops), I kept my head raised to revel in the cathedrals grandeur.

Even though Ive lived here for many years, glimpsing the Duomo—even if only a small portion of it—from anywhere in Florence is always a treat.

As soon as I turned the corner onto Lungarno Diaz, the voice of the singer on the Ponte Vecchio flowed in my direction and accompanied me all the way to Ponte Santa Trinita. The air had cooled down considerably as the feathery clouds drifted across the horizon, hindering the sun from blazing. The sky to the west was a golden yellow and above swifts whirled around, chirping. With every passing minute, the air grew cooler. Even though the wind blew steadily, tossing wisps of my air in my face, the clouds appeared motionless. 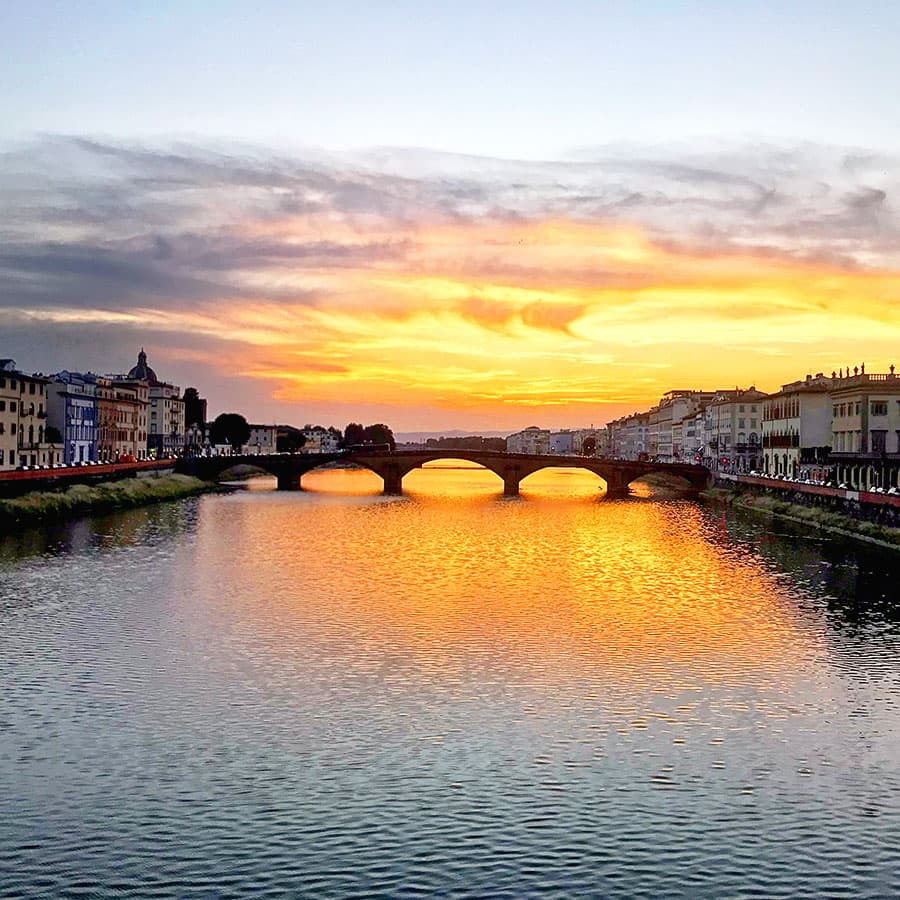 I kept my eyes transfixed on the view to the west. The dome of the San Frediano in Cestello church peeked above the buildings. The persistent flow of air created ripples on the water. Every now and again a fish would pop up from the river, making a soft splash and disturbing the pattern. The sweet scent of the Arno swirled around me, instilling me with tranquility.

Snapping photos every few minutes, I didnt want to miss a single moment of the sunset. The golden glow in the sky and on the water turned orange and then faded to pink. I looked behind me when a group of people walked side-by-side in the street, laughing and talking excitedly. I grinned at the vibrant, yet gentle energy swirling around me.

The faint sound of church bells rang at 9 p.m. I couldnt make out from where they came, but only counted six of the nine chimes. As the sun continued to set, the sky became a pale blue, contrasting with the brush strokes of gray clouds. I gasped when the lampposts blinked on. The water shimmered white and gold, and the texture of the sky mirrored itself on the water, albeit a darker version of it.

Before returning home, I looked behind me to see the Ponte Vecchio with the sky hovering above it a royal blue. I let my gaze trace the suns path to delight in how the sky became increasingly lighter from east to west. The cool wind ushered me along Lungarno degli Acciaiuoli. Before crossing the Ponte Vecchio, I looked back at Ponte Santa Trinita. I couldnt help but smile when I saw that the sky had turned a deep blue with the lights glistening gold on the water.

Before heading home after watching the sunset the other day, I stayed in place to watch the sky turn blue. I delighted in embracing the full spectrum of the sunset: from the golden hour (a half hour before the sunset) and the blue hour (a half hour after the sunset). Honoring the changes in the colors above and below the city, the ebb and flow of people passing by, and the gentle breeze zipping along the Arno instill me with tranquility. 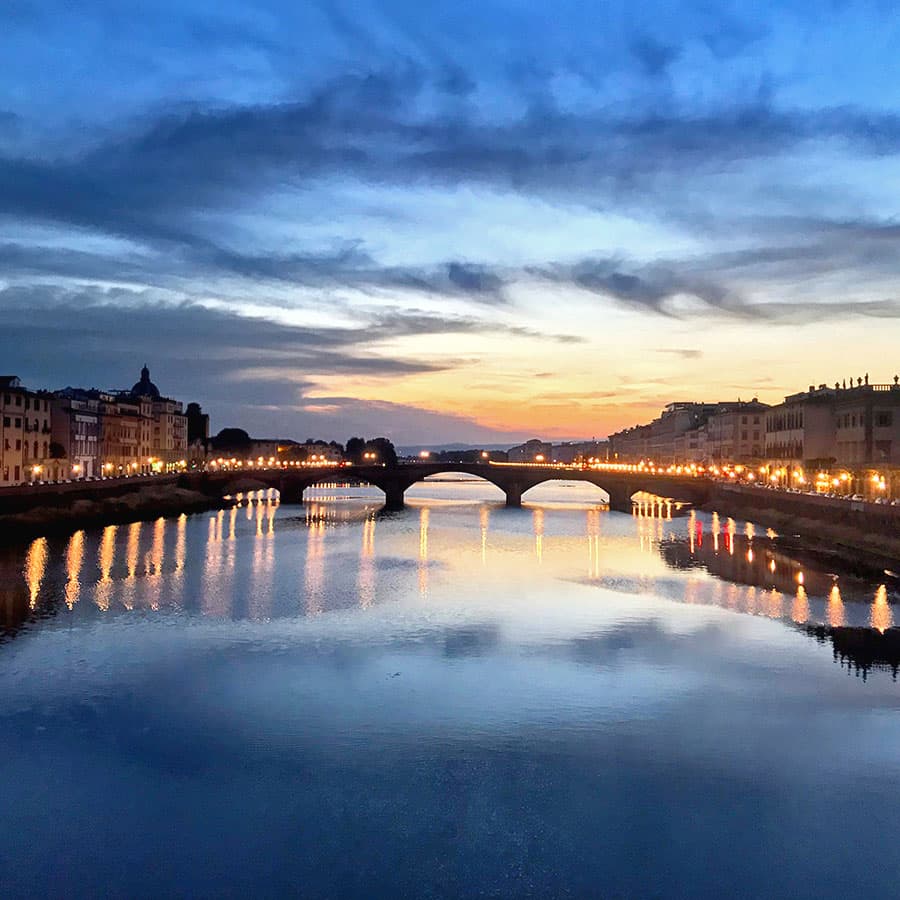 My favorite part of the blue hour was the way the lights from the lampposts stretched toward me, as if they were intent on accentuating the reflections on the water.

Every sunset is magical, and not only delights my senses but also instills me with gratitude for what I experienced and hope for what will come next.

After snapping this photo, I took a moment to celebrate the end of another day in which I experienced so much beauty. Every day, wherever I am, I discover more of the beauty around me to enjoy and to share.