A noticeable lull settled in at the beginning of August as many locals journeyed to the seaside or the mountains. Early mornings were so quiet that I was slow to start my day. As the day progressed, more and more out-of-town visitors and sightseers milled around the streets and piazzas. Further away from the Ponte Vecchio and the Duomo, the city kept its relaxing vibe. Before lunch, I went for walks in nature. The fragrant breeze filled with mellifluous birdsongs pacified me as I admired my beloved city from afar.

I entered the Cimitero delle Porte Sante (Sacred Doors Cemetery) beneath the basilica to have a quiet moment alone. The city appeared majestic under streaks of wispy clouds staggering across the sky. The sunlight caressed the buildings with terracotta rooftops, making their pastel façades glimmer. 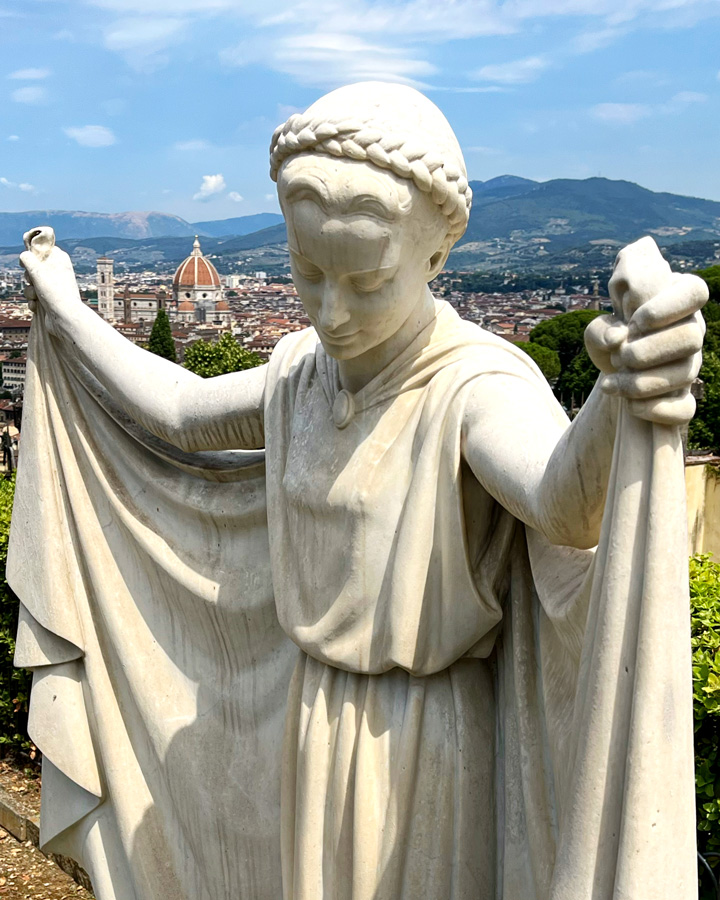 Tourists hiked up the wide marble steps toward San Miniato al Monte. Their bodies were weary, but their eyes were twinkling with delight as they peered at the basilicas marble facciata. With every step toward the plateau, more of the basilicas grandeur was unveiled to them.

Blackbirds sang from inside cypress trees, arranged around the grounds, that pointed up to the heavens.

I gazed at the Duomo in the nook between the female statues arm and cheek. As she embraced the cathedral, I did so as well. The warm gusts of wind shifted the clouds and encircled me with the scent of dry soil and stones.

The cicadas sang as the Duomos noon church bells chimed. The murmuring of the passersby amid the citys symphony of sounds depicted a typical summer day in Florence.

It wasnt until the sun seeped through my white linen shirt that I walked up to the basilica. Before entering the dimly lit interior, I admired the panorama as visitors marched on the gravel toward me. The tranquil air, cooled down by the marble slabs on the ground, welcomed me. My body relaxed after only one long exhalation.

As I approached Ponte alle Grazie, a mellow breeze from the east stroked my face. The sound of a single robin chirping in a tree along the meadow accompanied my leisurely steps across the bridge. Only a handful of people milled around as the sun evaporated the morning clouds. Some were geared up for a run, while others were equipped to do extensive photo shoots. One photographer walked by, looking at the Ponte Vecchio with his camera dangling from his wrist. 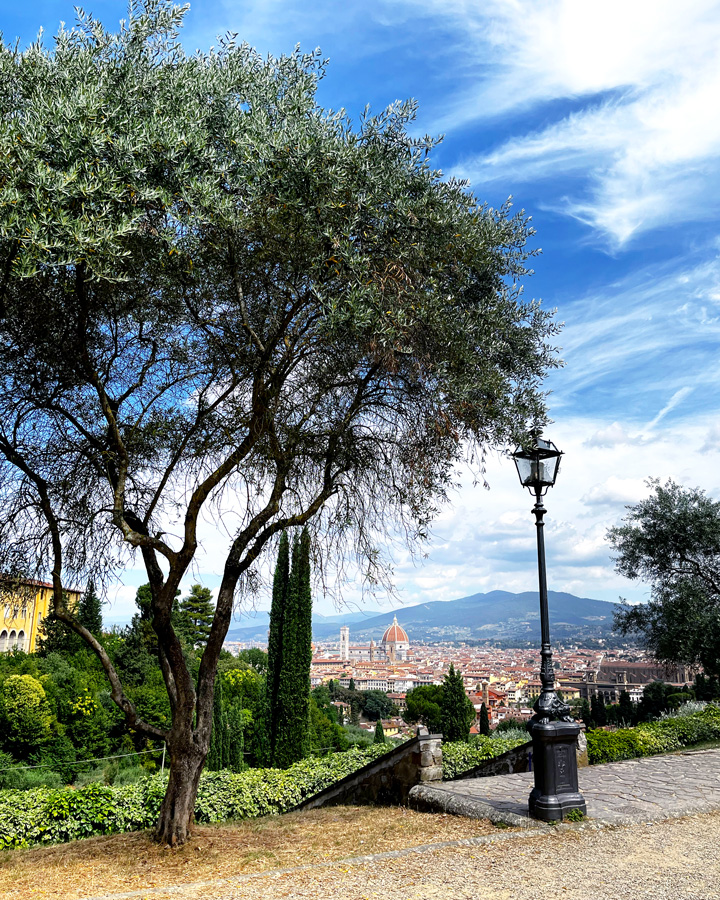 I hiked up the Rampe del Poggi, where the sweet melody of the water cascading the fountain delighted me. I turned my head often to admire the Duomo dominating the panorama. Instead of stopping at Piazzale Michelangiolo, I continued up to Viale Galileo. Passing across the street from San Miniato al Monte reigning high above Florence, I proceeded toward one of my favorite spots.

As I strolled along the stone path, the repetitive sounds made by the crickets became louder. I inhaled the warm and dusty air fluttering by as I embraced my beloved city. The Duomo framed between an olive tree and a lamppost is precisely how I would depict Florence. A bustling city nestled in the lush Tuscan countryside.

When I see my world from a different vantage point, I feel rejuvenated. As my view widens, my mind becomes more supple and welcomes new ideas.

Behind the fountain in the Giardino delle Rose, I sat on a stone bench and listened to the water trickle into the pond. Large, waxy water lily leaves reached up and over the stony border. Bees hopped in and out of tiny blossoms growing between the stones along the pathway. Lizards twisted and turned through the grass, hiding from the passersby. 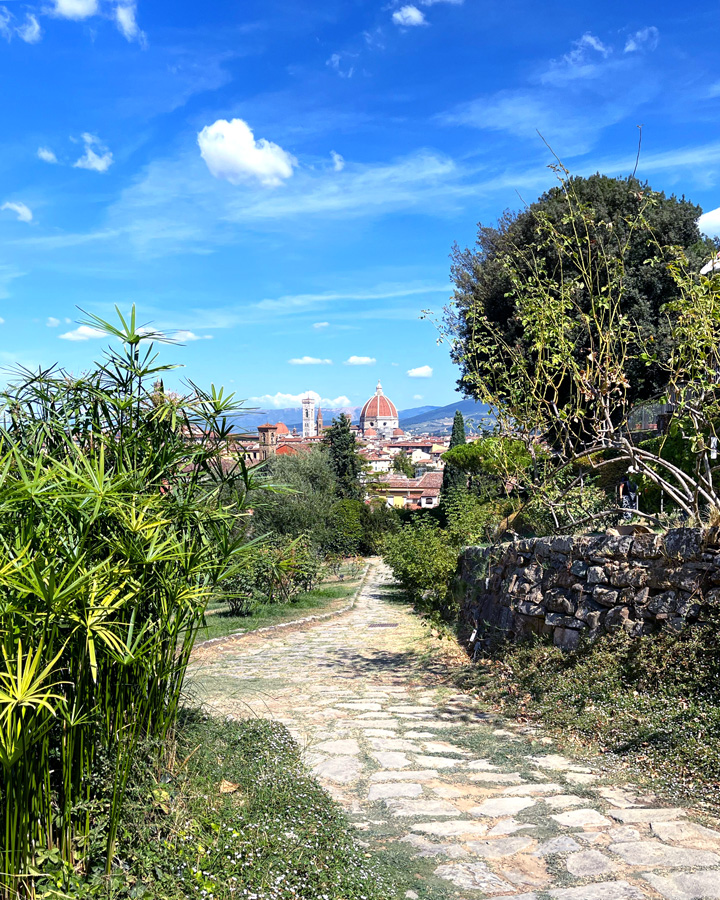 As the sun grew strength, I moved to a shady area beneath a hazelnut tree. I smiled at the Duomo nestled between a large bush and an olive tree. A cool breeze gave much needed relief from the suns harsh rays. Low hills and mountains defined the horizon below a pale blue sky, where dollops of cumulus clouds sashayed west.

Flocks of visitors sauntered up the incline to reach Piazzale Michelangiolo. One woman detached from her group and frolicked around the rosebushes.

A whiff of parched soil and arid stones permeated the humid air when the wind halted. When it kicked up again, sundried pods, shaped like lanterns, rustled from the tree branches.

After the noon bells chimed, I navigated the garden and paused sniff the roses. I stood on the slippery stone path before exiting the gardens to admire the Duomo one last time.

As the sun dissolved the mornings opaque veil of clouds, it revealed a pale blue sky. Fluffy clouds bubbled up from just beyond the hills outlying the city. While traversing Ponte alle Grazie, a cool gust of wind rushed past me, nudging me to turn my head. The Ponte Vecchio spanned the river at its narrowest part, where it appeared to pull the two halves of Florence together. 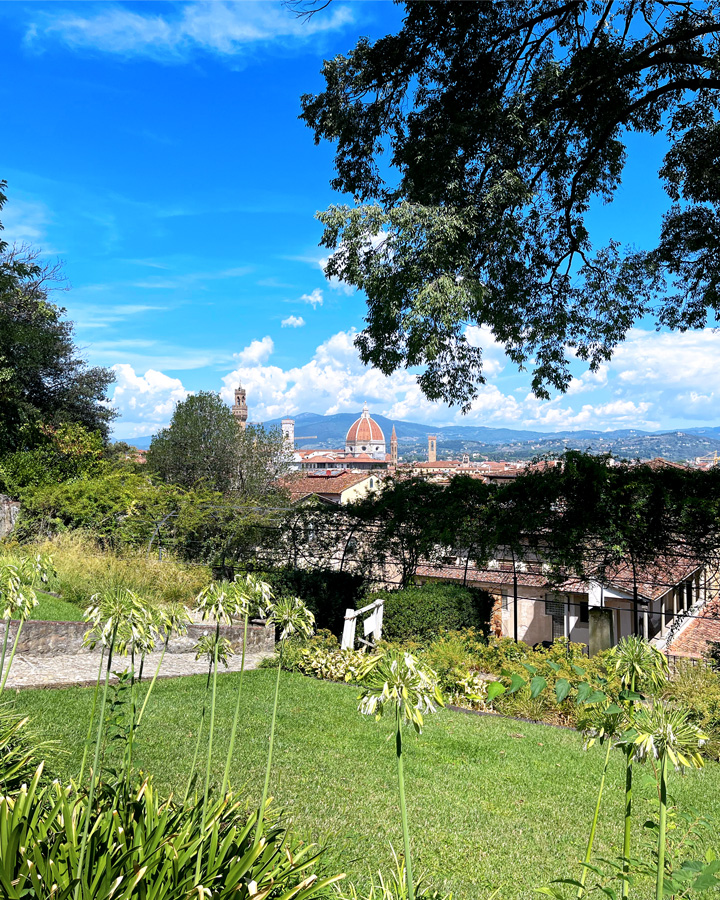 The moment I stepped onto the gravel in Giardino Bardini and heard it crunch under my feet, my shoulders dropped. As I sauntered up the incline, my lungs expelled a long breath. Passing the overflowing jasmine bushes, I inhaled through my nose and reveled in the mélange of rich scents. The warm soil, the dusty stones, the verdant hedges and trees, and the tall grass.

I planted myself on a weathered bench in the shady portion of the lower garden. Before me, the Duomo glowed between a European nettle tree and a row of African lilies. While the sweet-smelling air fluttered past me, two white butterflies twirled around the greenery as one cicada sang for a couple of minutes and then stopped. The clouds seemed immobile, but after looking away for a few minutes, they had inched further west.

A few minutes before noon, Santa Croces bells clanged. The Campanile di Giotto chimed in a few moments later. Other church bells rang in the distance while Florence remained shrouded in silence. Afterwards came a soft hush. I pulled back my shoulders and breathed in the gardens serenity, which both relaxed and invigorated me.