As Autumn approaches, the days are becoming shorter and the evenings chillier. In the past few weeks, I experienced many magical moments while strolling along the Arno, watching the sunset, sitting in the Rose Garden, and walking down Via dellOriuolo. When I was inspired, I paused to bask in my surroundings to soak up the details and savor them.

As the sun climbed above Piazzale Michelangiolo, I headed to the brick wall along Lungarno delle Grazie. Billowy clouds staggered across the sky, carrying a hint of Florences energy beyond the city limits. I stopped alongside a lamppost to breathe in a cool breeze that permeated the humid air. After I caught a whiff of the algae-filled water, my body relaxed. A flock of pigeons flew overhead while solitary seagulls soared above the river. 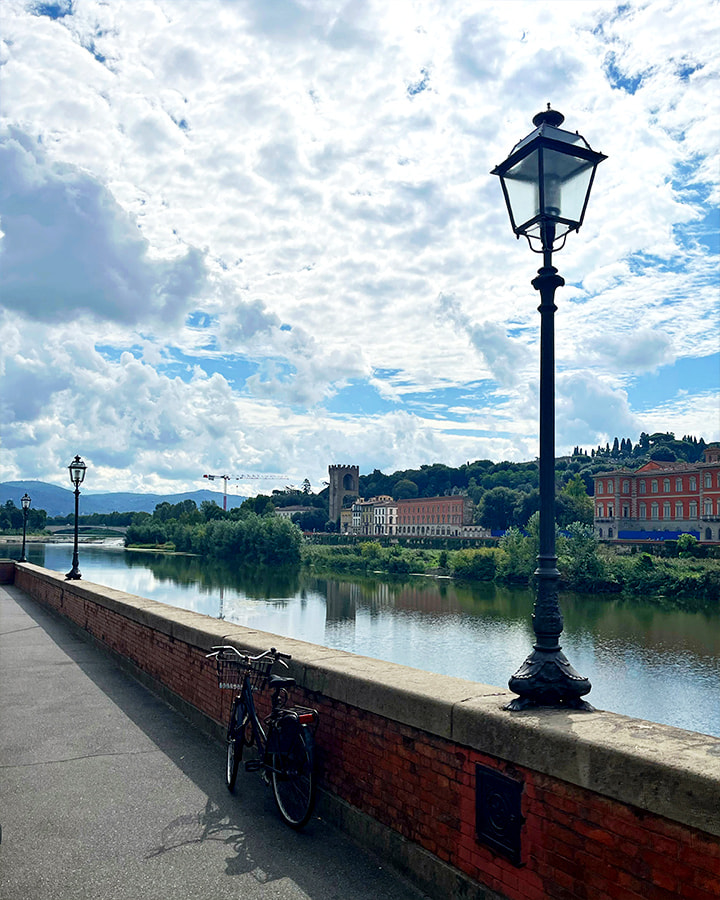 When the wind died down, the Arno revealed on its glossy surface snippets of the light blue sky peeking through the white clouds. While gazing the riverscape, pastel-colored palazzi standing above the lush riverbed captured my attention. Their presence gave me a sense of serenity.

A few tourists ambled down the sidewalk, holding maps and carrying umbrellas. When one woman arrived next to me talking on her phone, I returned to the bridge. Without a car in sight, I crossed to the other side.

As I leaned against the metal railing, I marveled at the green meadows under sunnier skies. A renaiolo (sand digger boat) emerged from below the Ponte Vecchio and floated toward me. After it reached the shore, I continued my stroll and delighted in the two different views from the same bridge.

A half hour before sunset, I stood on Ponte Santa Trinita and faced west. My fingertips grazed the bridges limestone barrier, which was still warm to the touch. As I contemplated the muted colors around me, I exhaled the tension from my body. I closed my eyes and took a whiff of the gentle stream of tepid air. Its rich scent comforted me. When I opened them, my attention was drawn to the harmonious ripples on the water. 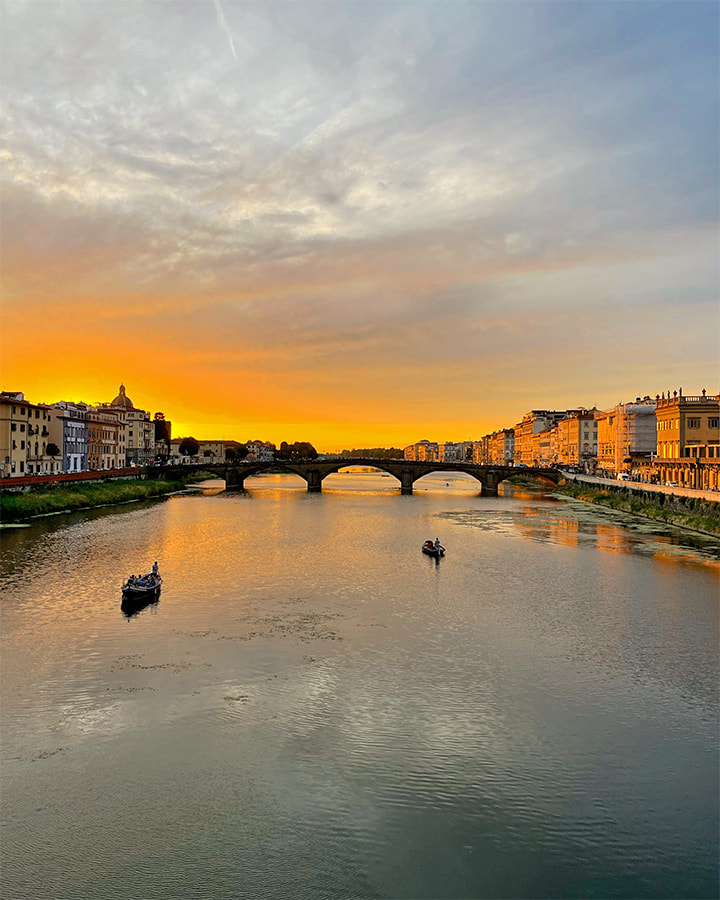 Renaioli (sand digger boats carrying passengers) and canottieri (rowers) rowed up and down the Arno through clusters of green leaves shimmering on its surface. When the water flattened, a fish popped out and splashed as it plunged back in.

Just when I thought the sun would disappear with little fanfare, a luminous golden halo emerged behind San Frediano in Cestello. The sunlight was so intense that it reached the buildings along Lungarno Corsini. When a ribbon of orange clouds hovered the distant mountains, a solitary heron passed overhead as it flew toward the Ponte Vecchio.

The crowds dispersed as the sky grew dim. It wasnt until the streetlamps flickered on that I headed home.

As I rounded the corner under the Primavera statue, I glimpsed the half moon glowing from behind an opaque blanket of clouds. When I reached the Ponte Vecchio, the sky turned royal blue. I wanted to run back to Ponte Santa Trinita, but stood along the brick wall to watch the evening become night.

The sharp scent of freshly cut grass greeted me as I marched up the stone path in the Giardino delle Rose. Strong gusts of wind announced the gradual change of seasons. 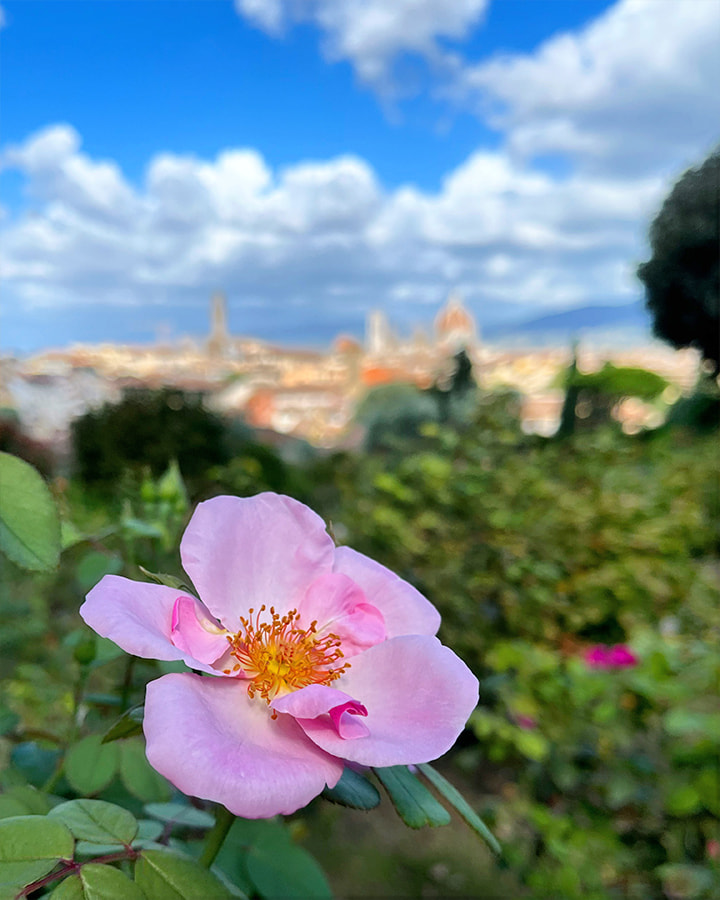 I tiptoed around little piles of grass cuttings on the lawn. A tiny mauve butterfly, the size of my thumbnail, fluttered around me as I searched for new roses on the bushes. One voluptuous white rose surrounded by pointy green leaves caught my eye. When I leaned in, I marveled at the texture of her golden hued petals before inhaling her delicate perfume. I closed my eyes and breathed her in again.

The suns soft rays of light grazed the city and caressed my skin. Fluffy clouds slinked to the east to join a larger cluster, where they filled in the empty spots like puzzle pieces.

A few minutes before noon, I positioned myself next to the fountain. Santa Croces bells rang first, then the Campanile di Giotto chimed in. Another set of gongs sounded, possibly Santo Spiritos. Finally, San Miniato al Montes bells sounded. The melodies encircled me as I stood next to a rosebush whose vibrant orange blossoms swayed.

After the bells stopped, I headed to an empty bench under a linden tree. From my shady spot, rays of sunlight peeked through the rustling leaves and twinkled. A few groups of tourists hiked up a narrow dirt trail on their way to Piazzale Michelangiolo. Almost everyone paused on the gardens terrace to admire the panorama and took a photo or two.

Before leaving the garden, I ambled around the rosebushes one more time in case I missed any roses. One scarlet and white rose, illuminated by the sun, caught my attention. I let my nose hover its delicate petals, closed my eyes and inhaled. Its sweet and fruity perfume lingered around me until I exited the garden.

As dark clouds passed overhead, the sun was free to beam its warm light on the Duomo. Its golden glow swept away the shadows along the narrow streets. The change of seasons ushers in a new wave of delightful moments for us to enjoy. 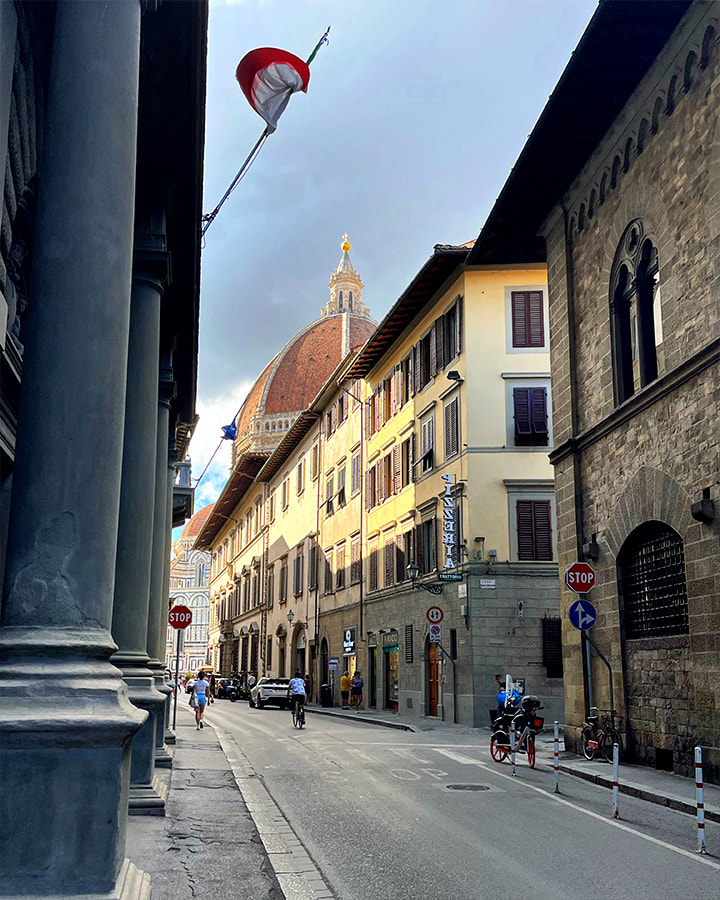